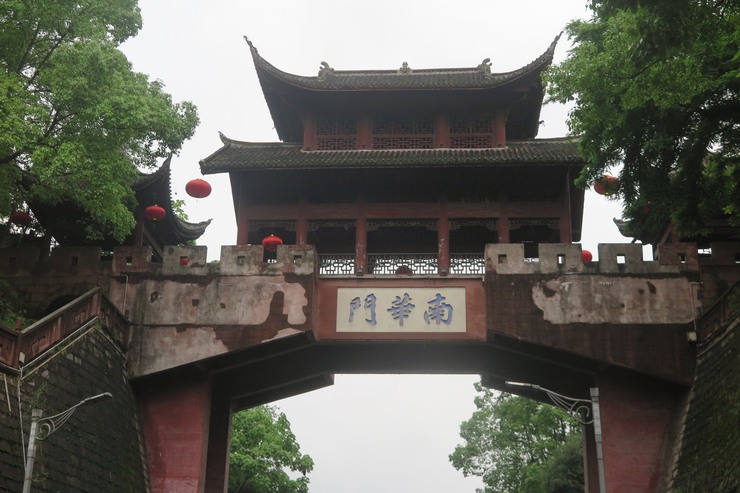 Once praised by the famous New Zealand writer Louis Alley as China's most beautiful town, with the ancient city of Lijiang in Yunnan Province, Shanxi Pingyao ancient city comparable to the "Peiping North and South Phoenix" reputation. 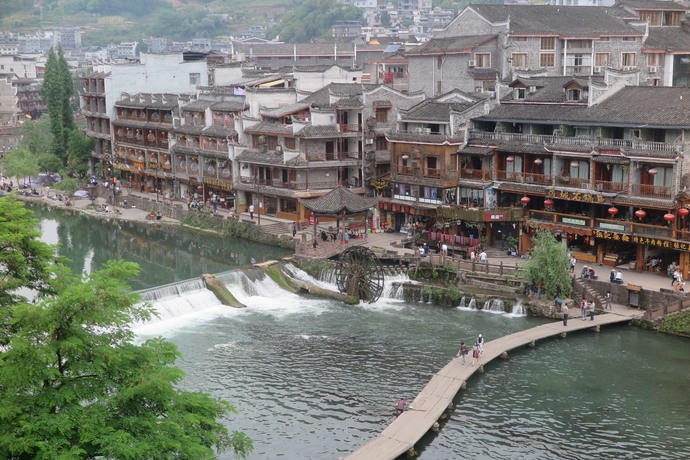 Near the bridge is "snow bridge . " According to reports, in 2011, Phoenix famous painter Mr. Huang Yongyu design and donation, in Tuojiang ancient city scenic area built four antique landscape bridge, named "wind bridge", "rain bridge", "snow bridge", "fog bridge" , The project started construction in April 2011 with a total investment of 11 million yuan, after more than a year, completed in November 2012. It is said that this "Snow Bridge" is one of the four most beautiful landscape bridge. 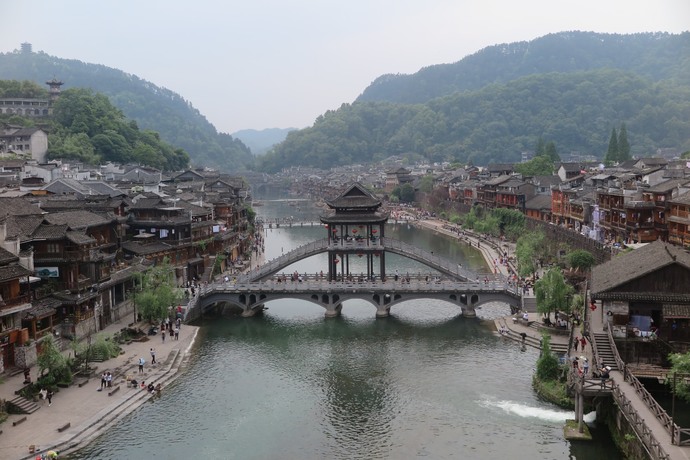 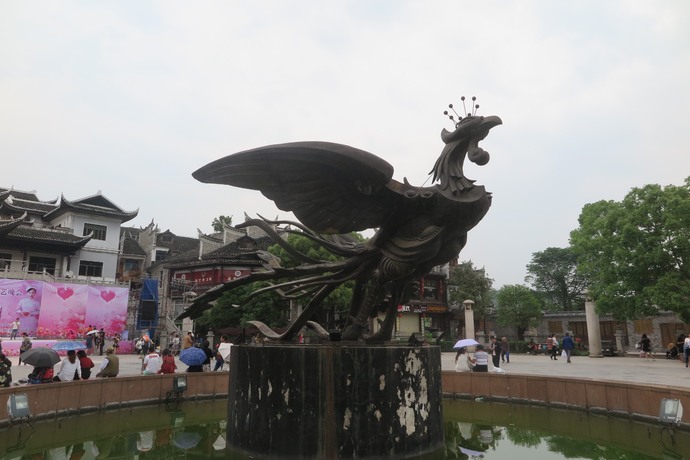 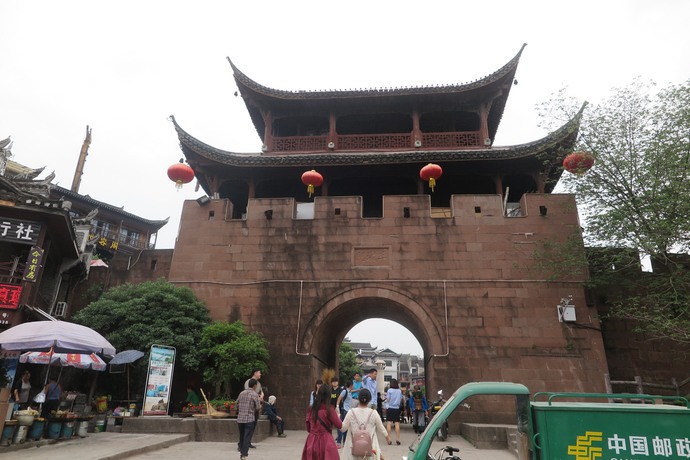 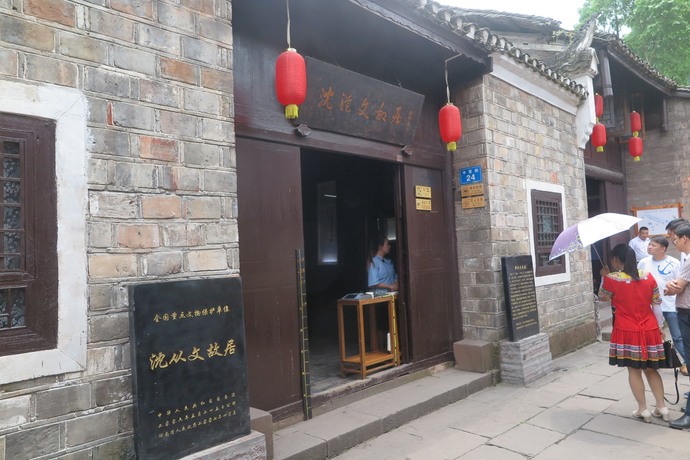 Shen Congwen former residence is located in Fengying ancient city of Zhongying Street, often said: "The world know the Phoenix, understand the Phoenix, is from Shen Congwen began." Many people come to Phoenix because of Shen Congwen's coming because of his familiar works such as Border Town, Western Hunan and Autobiography.
The former residence is where Mr. Shen Congwen was born. It is a courtyard with rich western Hunan features, with obvious Ming and Qing architectural style. Courtyard chic compact, so the home is now displayed Shen old ink, manuscripts, relics and relics, Phoenix has become one of the most attractive cultural landscape, to visit those who come in an endless stream. 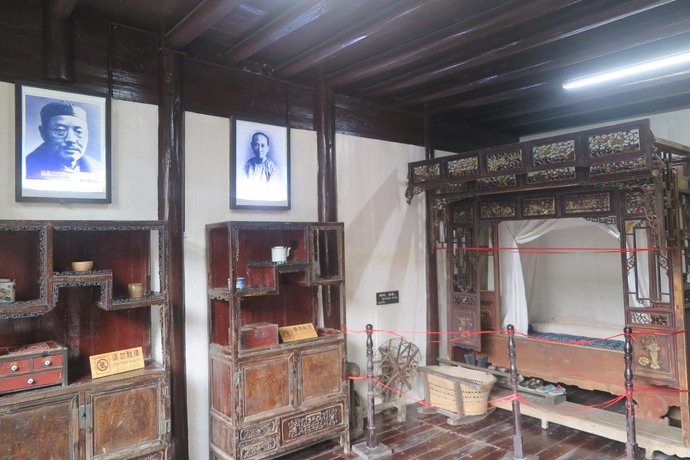 East Gate Tower was built in the Qing Emperor Kangxi fifty-four years (1715), the lower gate made of purple sandstone, the upper tower is built with ancient brick. Gate 3.5 meters wide, 4 meters high, was semicircular arch, two gates are covered with metal, with round iron nails, solid sturdy.
Wall construction with all the red sand stone, Seiko fine drill, the same specifications, the wall thickness of 0.8 meters, the lower part of both sides of the stone with stone grout, the middle filled with gravel clay, layer compaction; top of the middle of the filling Change to lime, pebbles, loess mix into the trigemony, about 0.33 meters thick, covered with red sandstone block. Tower 11 meters high, above the gate with a hole 8 holes. Xieshan roof, covered with waist eaves, cornices Qiaojiao, exquisite spectacular. 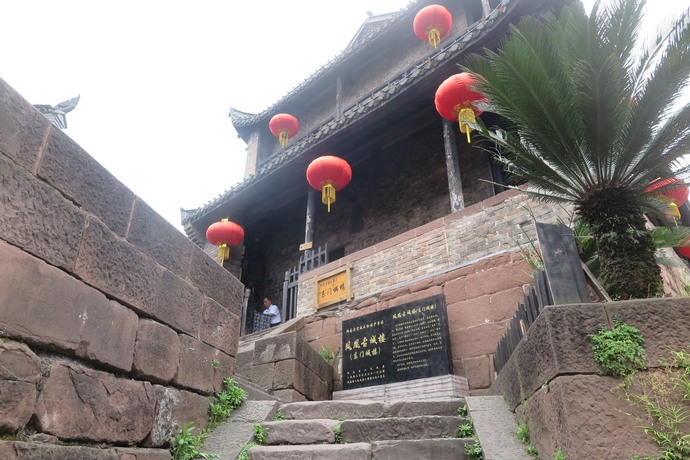 The four ancient guns of the Ming Dynasty, cast in the Ming Wanli forty-three years (AD 1615), formerly known as Juer gun, the artillery barrel was iron, 1.62 meters long, 12 centimeters in diameter and weighs 510 kilograms for the time The most powerful heavy weapon in the war. 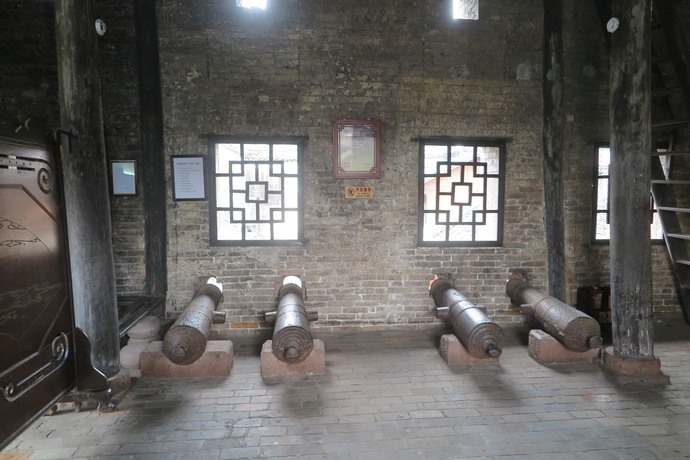 Dongmen front wall hung with a "Phoenix Zhili hall city plans", it is based on "Phoenix Hall Chi" copy. In this pair of maps details the geographical location and distribution of ancient Phoenix city watchtower, towers, cards, also shows the important military status of the ancient city of Phoenix in the defense system of the South Wall.

Located in the East Gate, North Gate between the city walls under the Young's ancestral hall (in front of the latter to facilitate the construction of tourists up and down the wooden staircase).

The Yang Ancestral Hall was originally built in 16th year of Daoguang (1836). It is a wooden courtyard with four floors and a total area of ​​770 square meters. It is composed of the main entrance, the stage, the hall, the Langfang, the main hall and is rectangular. The stage for the single eaves Xieshan Ding, eaves decorated wishful arch, 16 meters high, the main hall lift the beam, the gable back cat arch, divided into one bright two dark three. On both sides with rooms.
Yang Ancestral Hall design sophisticated, fine workmanship. Windows, doors, eaves ornaments are hollow carved, the overall architecture has distinct national characteristics and high architectural art value. 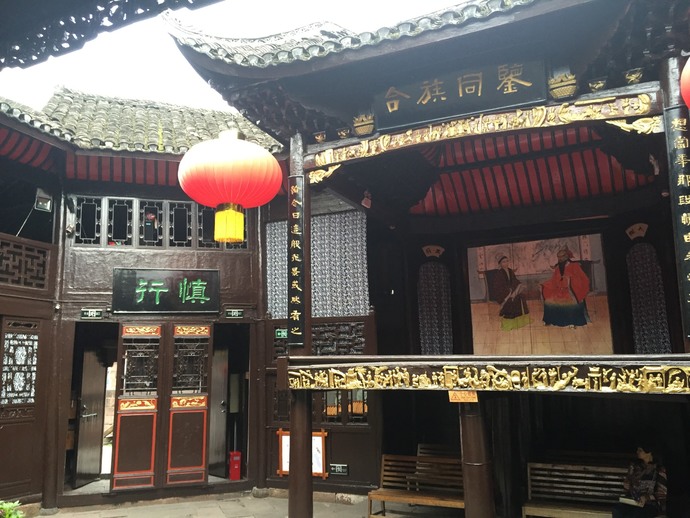 North Gate tower was built in the Ming Dynasty. North Gate Tower using local red sand stone construction, elegant workmanship, the city gate was half moon arch, watchtower on the outside of one open two layers, each layer 4, can control the fence outside the 180 degree plane . Although after several war, still towering towering in Tuojiang River. 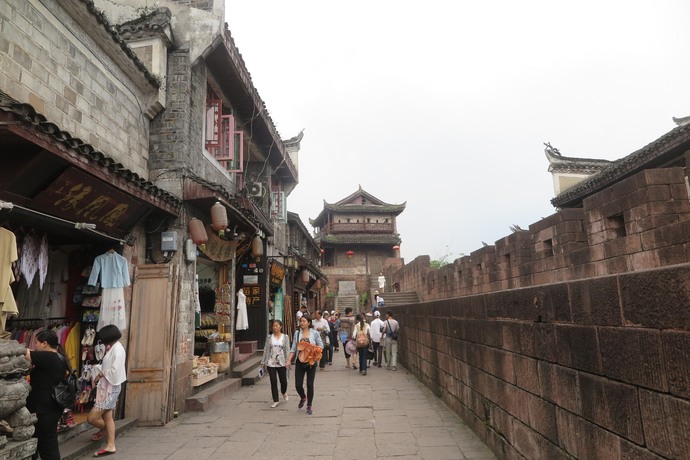 Xiong Xiling's former residence is located in an alley in the ancient city of North Star Street, June 25, 1869 (Lunar New Year) was born and spent his childhood here. 200 meters east of the former residence is the beautiful Tuojiang.
Former residence for the courtyard of the South is the ancient style of shingle, relatively short but very delicate, doors, windows for the wood structure, or carved or drawing on it, modeling generous, exquisite workmanship, is a typical Miao ancient court building architecture, very ethnic style . The existing four houses remain the same as before. 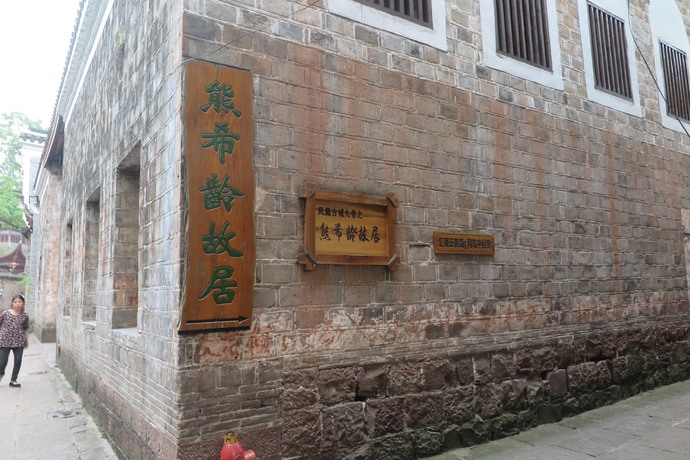 Xiong Xiling's former residence, the exhibition hall displays Xiong Xiling's life before his death, his work used things, a clear picture, a section of vivid words, recorded Xiong Xiling's footsteps of life, interpretation of the trajectory of his life. 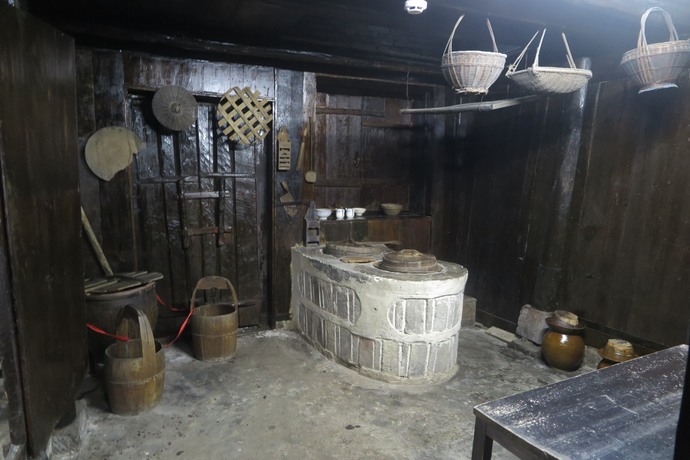 Tips:
built on the left of the former residence of Mr. Xiong Xiling Memorial Hall. 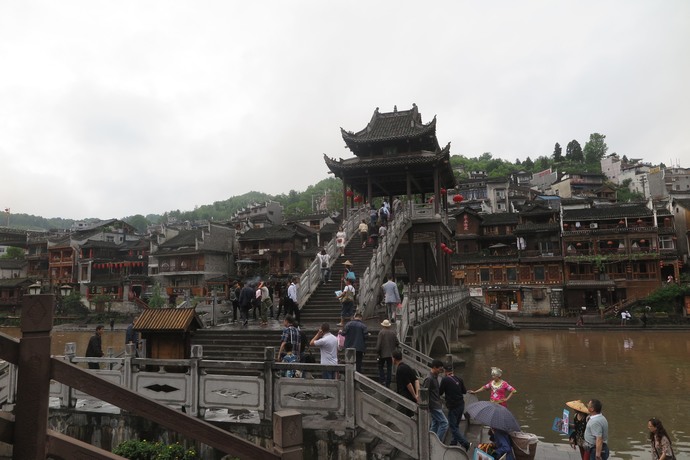 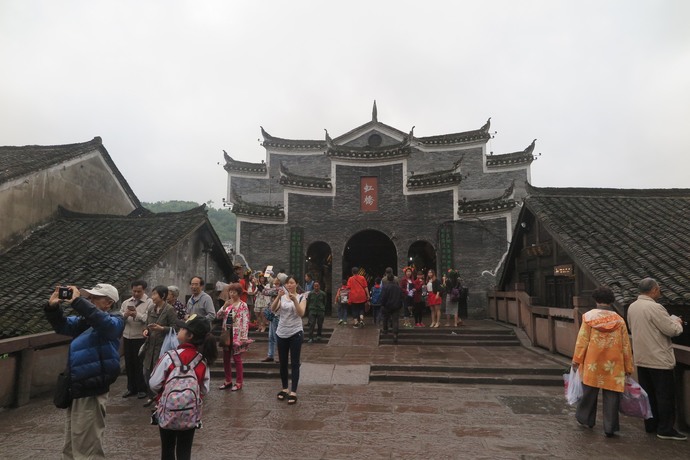 Hongqiao formerly known as Hongqiao, also known as "stormy building" was built in nine years of the Qing Emperor Kangxi (1670), the Republic of China three years to rebuild, the bridge has two pier three holes, is made of local red stone sand stone arch bridge.
Hongqiao lying on top of the Tuo River, located in the center of the ancient city of Phoenix, where to go from here are very convenient. View the entire Phoenix on Hongqiao, Tuojiang picturesque scenery panoramic view. Hongqiao is divided into two layers, one is mainly shops and grocery stores, the second floor is a folk culture building. 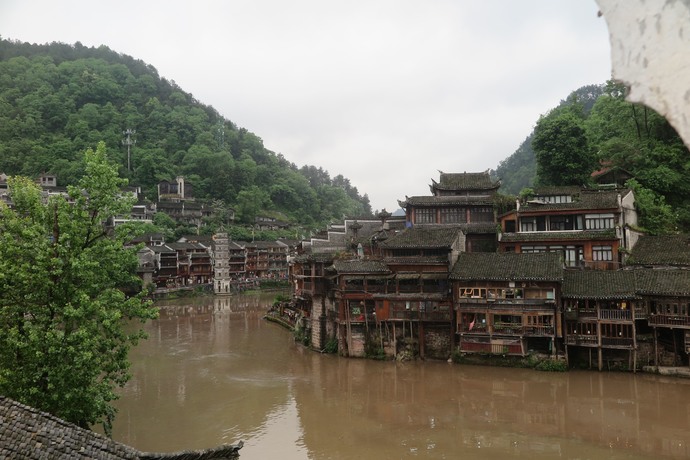 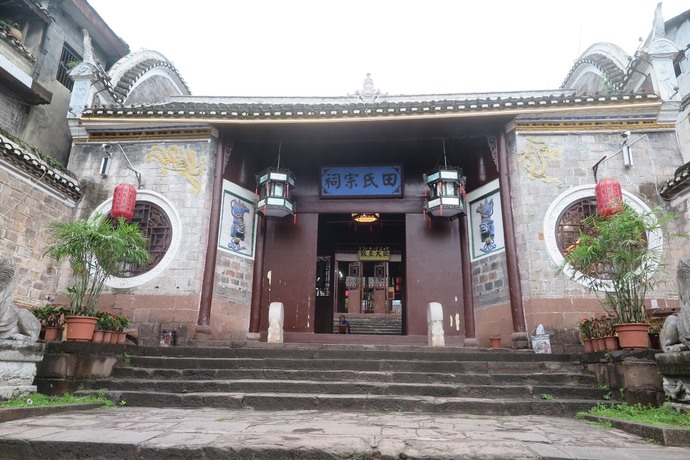 Tian ancestral temple is one of the two largest ancestral temples in Phoenix (the other is the Yang Ancestral Hall), was founded in the Qing dynasty seventeen years (1837), was appointed imperial commissioner, Guizhou prefect of the Phoenix Hmong people Tian Xingshu rate tribe Donated money to build, the early Republic of China, Tian Xingshuu Zi should repay huge sums and finally completed the construction. 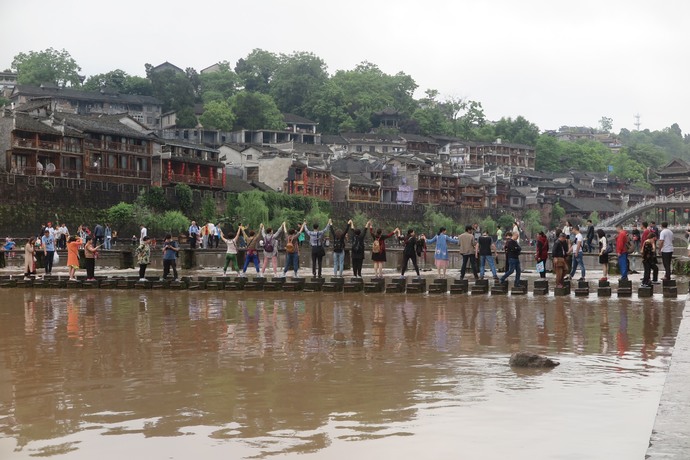 Tuojiang jump rock, located in the ancient city of Phoenix northbound Tuojiang River. Built in the forty-three years of the Qing Emperor Kangxi (1704), the old town was one of the main access to the ancient city of Fenghuang.
Gansu and Miao people uprising, revival of the 1911 Revolution Phoenix revival, liberation war, here are the main channel to attack the ancient city of Phoenix. Dancing rocks, however, are more than 100 meters long. One high, one low, two rows of neat rock piers stand in the Tuojiang River. Because pedestrians are hopped by this river, they are called "jumping rocks." Tuojiang rock at the end of the Qing Dynasty has been washed away by the flood, and now the rock is the Fenghuang County government by the end of 1999 at the site of restoration. 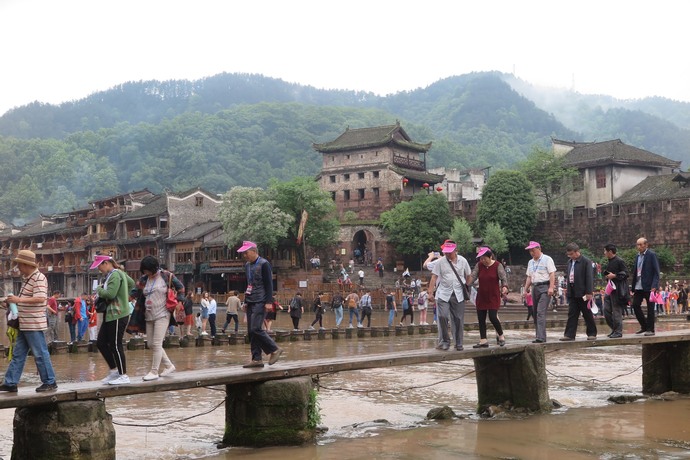 Tuojiang rock at the end of the Qing Dynasty was destroyed by the floods, in order to facilitate access to people, but in the original site of 20 meters upstream repair a stone pier, also known as "rock." The "rock jump" a total length of 100 meters. 15 rock pie in turn in the river bed Tuojiang. Rock piers were repaired with red sand stone blocks, piers and piers 5 meters apart, above the board with the board shop, wood and then tied with chains, fixed on both sides of the river on the iron pile, flood washed away.
Up and down two rocks, now not only Tuojiang River people from the main road, but also a very ancient ethnic city of Fenghuang a beautiful landscape.