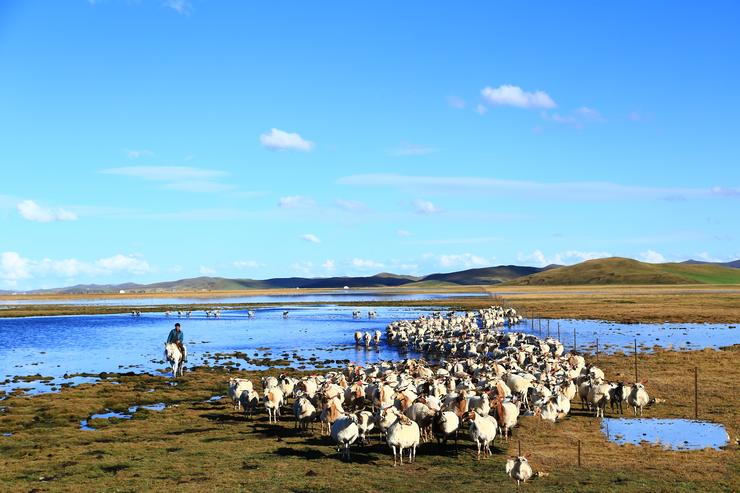 Why say it the most classic?

First look at the map from the line, starting from Xining, Qinghai Lake, and then take Delhi to Dachaidan, Chaidamu edge into Dunhuang, Hexi Corridor to Zhangye, Zhangye from Zhangye most American Road 227, back to Xining , Is a complete loop, do not go back.
The whole journey of 2,700 kilometers, along the famous attractions Qinghai Lake, Chaka Salt Lake, Qaidam Basin, Mogao Grottoes, Jardine Demon City, Mingsha Crescent Moon Spring, Jiayuguan, Zhangye colorful Danxia, ​​Mati Temple, Zhuoer Mountain Landscape District, Qilian Mountains, Qilian Prairie, door source mu rape. The essence of Qinghai, Gansu attractions are covered, is a large collection of natural history and Silk Road humanities history, is currently one of the best Northwest Line. And the whole road is good, whether it is by car or fight / chartered, are very suitable.


Why choose Xining as the starting point and the end, rather than Lanzhou?

Reason one: Xining is known as the summer capital, summer temperatures cool suitable Lanzhou summer temperatures are too high, and Lanzhou traffic jam serious urban environment is not optimistic (not intentionally black Lanzhou, the fact is so ~ ~);
reason two: starting from Xining , Then the first day of journey 120 kilometers to reach Qinghai Lake, a short road, full play time; if replaced by Lanzhou departure, Lanzhou from Xining 225 km, and then rushed to Qinghai Lake, the first day of the basic will have to Rushing in the road;
reason three: the last day of the trip is from Zhangye arrived in Xining 350 km, take the most beautiful 227 State Road. If you direct from Zhangye Lanzhou there are 520 km, the entire Gobi, landscape monotonous. Even from Zhangye to Xining and then to Lanzhou, it is over 500 kilometers too busy to choose Xining as the end point.
Reason 4: Xining is more folk-custom, and the Hui, Tibetan, Turks and Han nationalities are more integrated. Xining is also a plateau on the Qinghai-Tibet Plateau The largest city. Mosques and Buddhist temples abound, well worth the visit. 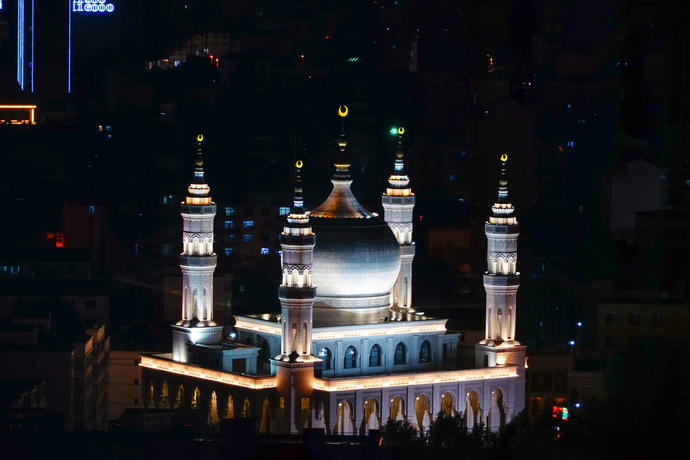 The best way to get to Xining

【Aircraft】 Xining increased more than 20 routes in the summer of 2016, basically covering major cities in the country. Coastal cities fly Xining, most need to stop by Xi'an, the main provincial capital cities can fly to Xining. Flying Lanzhou throughout the country flights more than Fei Xining, but the cost can be cheaper 20% -40%.
[Train] Xining across the country many trains, but the running time is long, and there is no high-speed rail. Xining connecting the country's high-speed rail needs to be completed by the end of 2017 Baolan high-speed rail opened to have.
So, the best way to get to Xining is to fly Lanzhou first and then Lanzhou to Xining again.
Lanzhou to
Xining two ways 1. Bus: Lanzhou Zhongchuan airport airport bus to Xining 100 yuan / person, respectively, at 12:30, 15:30 and 19:30 each class about 2.5 hours by car in Xining Downtown Ximen, Huitong Hotel, or to allow parking to stop off. Lanzhou Nakagawa Airport Customer Service Tel 0931-8168464;
2. Intercity car: Nakagawa Airport to Lanzhou West Station intercity high-speed rail (yes, is the Nakagawa Airport sent to Lanzhou West Station) from 7:28 to 22:34 at night Inter-shift intensive, only 40 minutes by car. West from Lanzhou to Xining, motor vehicles from 7:40 to 20:55 in the evening, the frequency is also very much, the journey takes about 1 hour and 10 minutes.
Tips: direct flights to Xining, then choose Xining airport shuttle, regular vehicles, safe delivery destination, without bargaining, will not be slaughtered.


How can I go this line?

Most partners are looking for local carpool or chartered free exercise. why? Because local drivers are more familiar with the route, there are locals driving, more relaxed play. Northwest traffic is fairly good, but along the winding road, high-altitude road more, less likely to experience an accident. And long-distance driving, easy to fatigue, so I do not recommend driving.
Ride car costs: Carpool Link are generally 1500 yuan / person; off-season time, which is the lowest price have 1,200 yuan.
Special Note:
If the holiday is short, there is no seven days, around the Qinghai Lake 2-4 ringlet game can also play. See Raiders "holiday is too short? Around Qinghai Lake 2 - 4 small loop play any of your choice! " 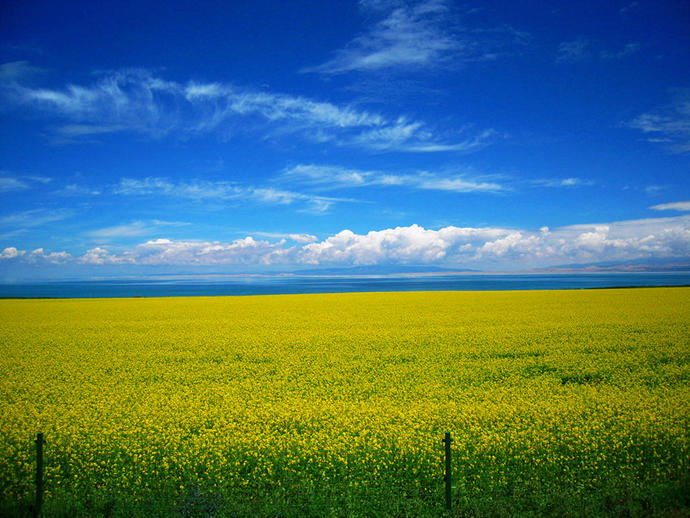 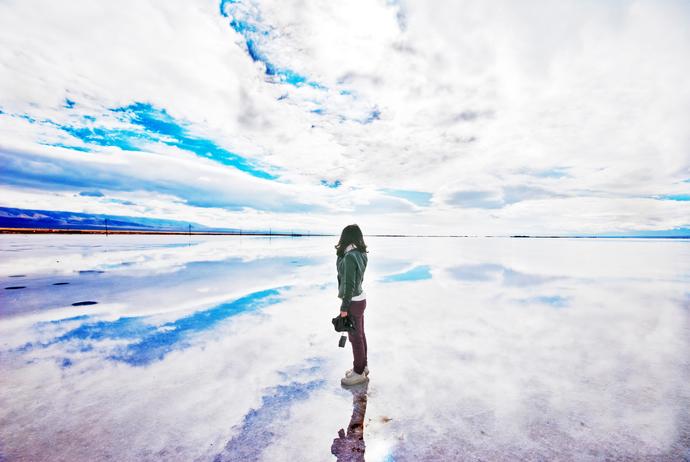 Dachaidam-20km-Qaidam Basin Highway-200km-Qinghai Lake Arhat-40km-Axel-64km-Yangguan Site -63km-Dunhuang (or Dachai Dan-20km-Qaidam Basin Highway-240km - Aksai -122km-Yumen Pass -60km-Dunhuang Yadan Ghost City -170km-Dunhuang);
The two main differences are the way to go - Yadan, you are taking the cold lake in Qinghai Yadan, or go to Dunhuang Ya Dan. Both have their own strengths and weaknesses, for the moment most of them take the Grand Link Yadan. There are three reasons: no tickets, you can easily enter; Asia's largest; easy journey.
Dunhuang Yadan access is bundled Yumen pass tickets. Dunhuang Ya Dan imposing manner more bullying, but if Yumen Guan is not a few poems, it is somewhat unsatisfactory.
When it came out from the town of Chai Qiandan, it was on the outside of the Qaidam basin. The highway extended straight on the Gobi Desert and the Yadan landscape was arranged on both sides of the road. Arrived at the cold lake, Qinghai's Yadan landform group full, spectacular dignity. To the "Yang out of the West for no reason," Yang Guan, then look at the ancients to face the infinite desert desolation of the Gobi. Then stay in Dunhuang, enjoy the bustling. 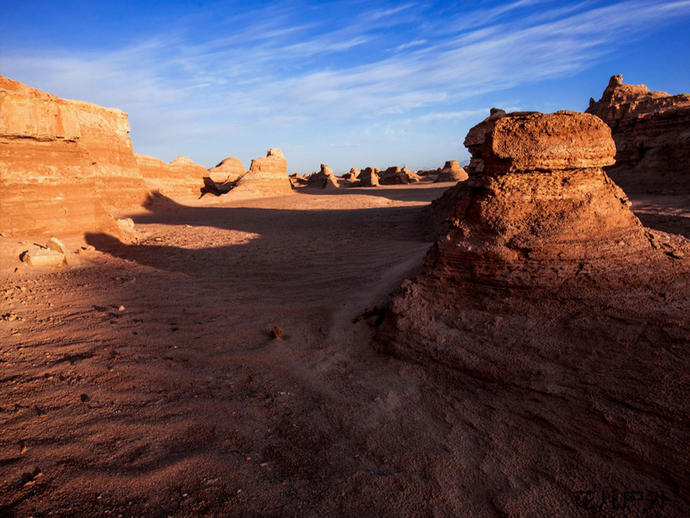 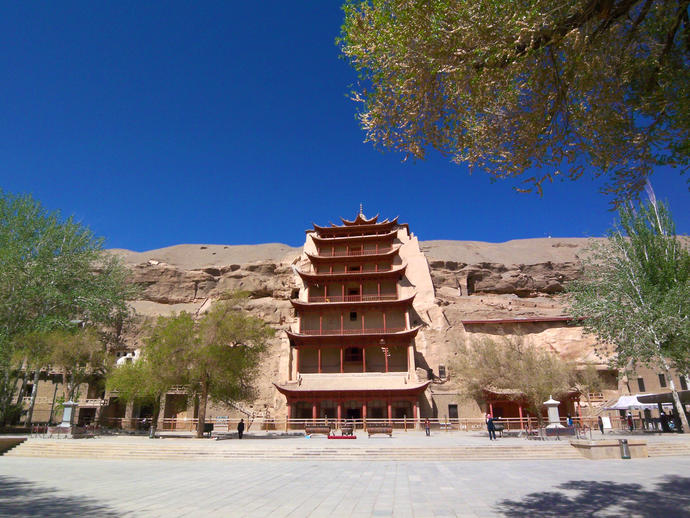 Dunhuang -380km- Jiayuguan -260km- Zhangye Colorful Danxia Long driving distance today, the main attractions are only two, is Jiayuguan and Zhangye colorful Danxia. Jiayuguan at noon is considered once again the history of the Hexi Corridor review, arrived in Zhangye, the beauty of colorful Danxia definitely make you full of energy! 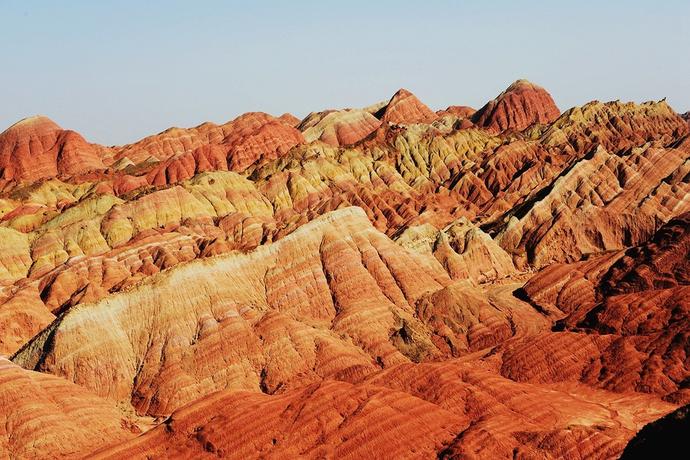 Zhangye Colorful Danxia -150km-Bian Du Port -130km-Menyuan -150km-Xining Grand Central Line 6th trip, is Zhangye back to Xining, take 227 the most American Road, after the flat Du Xia, to the Qilian steppe, to the door Source to see acres of rape, turning up to Osaka, overlooking the gate source, overlooking Gondashka snow peak. All beauty panoramic view. Then by the Black Springs Reservoir, back to Xining. 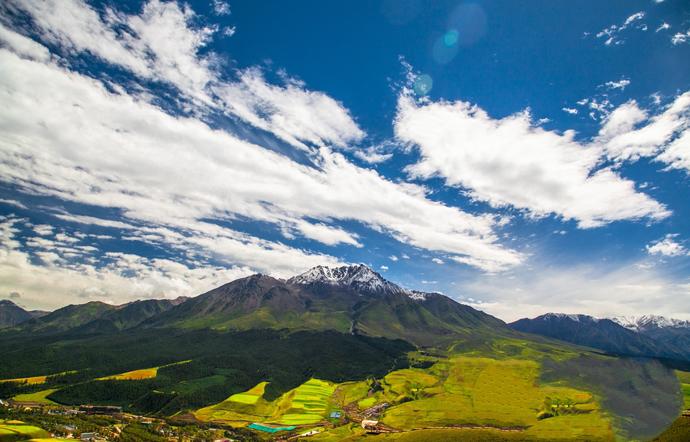 Qilian-170km-gate source-12km-Mount Daoshan Observatory -30km-Heiquan Reservoir -90km-Xining
Return to the gate source from Qilian, all the way Qilian grassland contiguous, cattle and sheep flocks, to the door source Million mu of rape, up to Mount Hanshin Mengyuan overlooking the beauty, overlooking Gondashka snow peak, returned to Xining by the Black Spring Reservoir. [The source of rape flowering July 5 to August 5, will be slightly affected by climate change]


Itinerary Highlights: Door source mu rape, Mount Osaka overlooking the
entire journey 2 days trip more tired: [Dachaidan to Dunhuang] and [Dunhuang to Zhangye Colorful Danxia] along the Gobi, hot and dry, driving time is longer. The rest are fine, magnificent scenery, easy journey.
So far, this most classic Gansu Grand Ring in Qinghai Province has been completed, covering all the humanities and natural scenery, it is worth the experience! 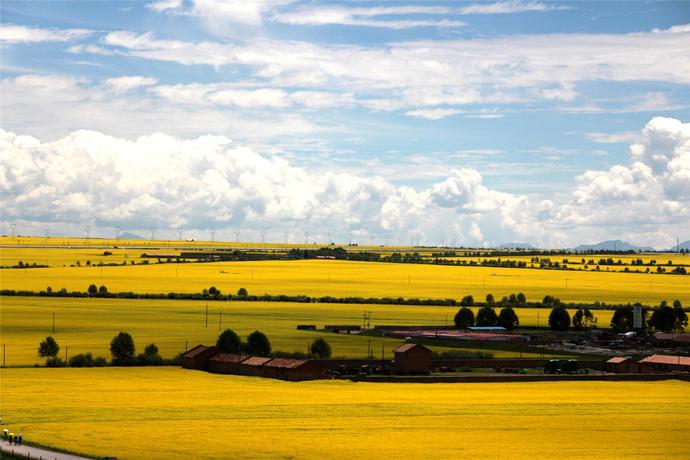 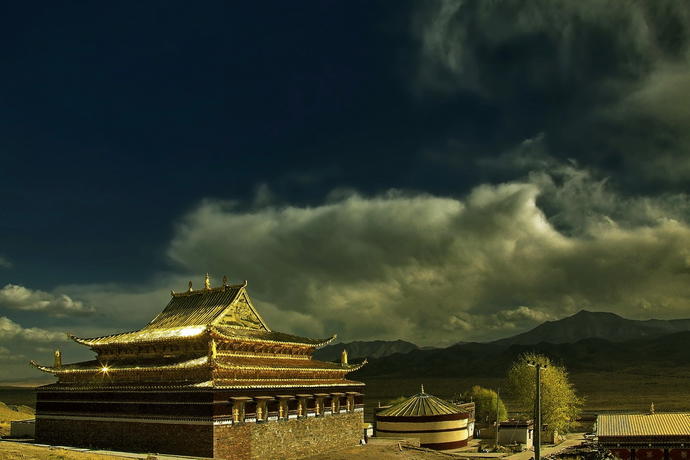 Advantages: This line is half of the ring road in Gansu, Qinghai, shorter distance, attractions did not reduce the richness.
Disadvantages: single-line walk, starting from Xining, Dunhuang over, large transport costs are high. Because at present all over the country to and from Dunhuang flights are expensive; if you take a train from Dunhuang to Lanzhou you need a full night's train journey, ample time, you can take a train from Dunhuang back to Lanzhou, Lanzhou and then fly back to all parts of the country (Grand Central flights are round-trip Lanzhou, cheaper).


[Xining attractions can be seen]
1. Xining Dong Guan Halal Temple ★ ★ ★ ☆ ☆
Founded in the Ming Dynasty, has a long history, one of the four major mosques in the northwest, the largest mosque in Qinghai. Friday at noon very spectacular service. Located in the eastern part of the urban area, take a taxi to the east of the Great Mosque can be. Tickets 25 yuan, no student tickets.
There is a free guide to the mosque in Dong Guan, where you can listen and understand Muslim culture. Pay attention to respect for religious beliefs, into the worship hall need to take off your shoes.
2. Provincial Museum ★ ★ ★ ☆ ☆
comprehensive and systematic display of Qinghai's history and culture, from ancient times until now. Located in Xining West most prosperous area, one of the landmark buildings in Xining. Taxi to Xinning Square Provincial Museum to get off. Free, ID change ticket, closed on Monday.
Provincial Museum is one of the core business district of Xining, locals often go places, commercial alley and traffic lane more prosperous. Kou Fu Street near the snack more, you can try.
3. China Tibetan Medicine & Drug Museum ★★★ ☆☆
The only museum in China that comprehensively displays Tibetan medicine, culture, folklore and religion, is a propaganda window for Tibetan compatriots.
Museum collection has a world record breaking Guinness treasure treasures "painted Grand View", this is a stunning Tangka world, absolute high-end atmosphere on the grade. Can experience the magic of Tibetan medicine, a little weird.
Located in downtown North District, a taxi to the biological Park Tibetan Medicine Museum get off. If you only visit the first floor, is free, on the second floor of the "painted Grand View" ticket 60 yuan, 30 yuan student tickets.
Since it has been a long time gone by, the nearby Qinghai-Tibet Plateau Museum of Nature also should not be missed, showing the geographical topography of the plateau, you can take the evening to visit.
4. Xining Nanshan Park ★ ★ ★ ☆ ☆
vision, standing on top of the mountain overlooking the panoramic view of Xining. Quiet environment, you can see Xining eight Kingdoms. Free public park, a direct taxi to the top of Nanshan Park.
Every city has a park, it is recommended to go inside to see the night view of Xining. Xining night most beautiful place is the Pearl of Pu Ning, Baidu map navigation can be reached.
5. Ma Bufang Mansion ★ ☆ ☆ ☆ ☆ The
only mansion built with jade, the walls are stacked with jade. Due to false landscaped Ma Bu Fang has been ordered by the National Tourism Administration delisted. This point is not recommended to go. Partners can judge by themselves.


Summer weather in Qinghai and Gansu

More From Lake in China 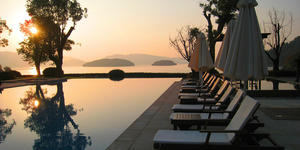 What are the resort hotels worth exploring in Qiandao Lake? 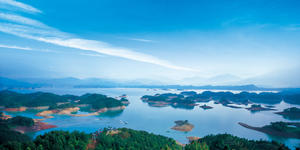 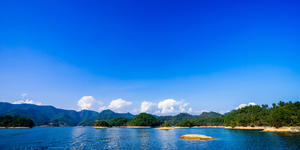 What is worth playing in Qiandao Lake?
READ NEXT 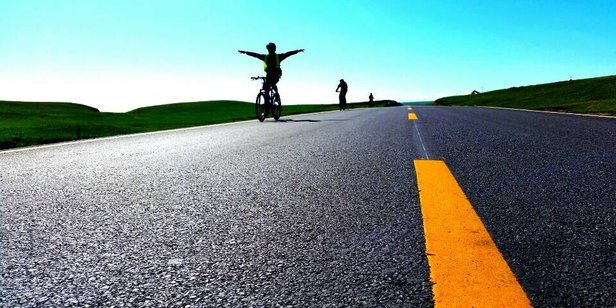 Practical Guide to Cycling in Qinghai Lake in 2018 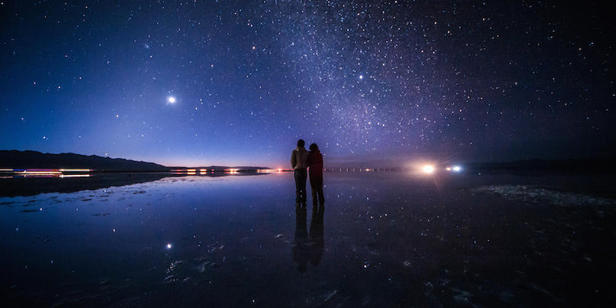 Fun Qinghai the most practical route 1-7 recommended, there is always a suitable for you ~
Load more Lake in China