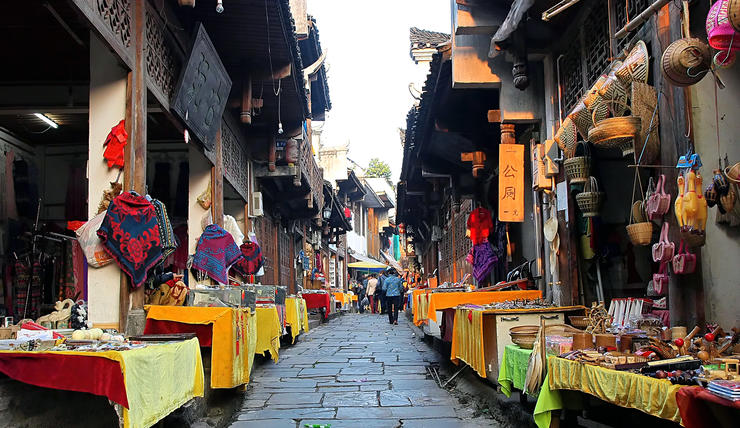 How to treat Phoenix as a food? Not waste money?

Breakfast: Phoenix local people to go to more of the three restaurants located near the Simon watchtower, specifically to ask the locals or open a cell phone navigation, are not far away, one is goose, one is pink tube, one is Li powder shop. 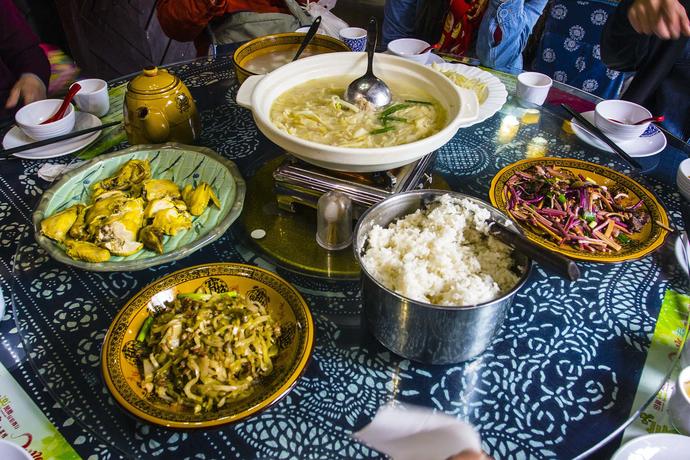 Dinner dinner: remember to choose the restaurant at a bargain. Recommend everyone to the Phoenix people to eat places to go. Near the center of the ancient city of Hongqiao do not consider this, you know, expensive rent, coupled with less weight, part of the ancient city restaurant zaka is not normal. Recommend everyone here to save some money, delicious, cheap Miao characteristics, a la carte general point.
Push grand recommended trees vegetarian, Ambassador restaurants, Toshiko restaurant three restaurants, which are known on the Internet has been great. Wanmuzhai, affordable, weight enough, so far I can hardly forget the bacon and fried bamboo shoots over there.
Fenghuang specialty dishes are duck, bracken, twice-cooked pork, sour fish soup, jar bacteria, bean curd residue, sauerkraut soup, the amount of delicious and inexpensive. If you live in the upstream or Metro, it is recommended to take into account the People's Hospital across the pastoral restaurants, Peng kitchen and other national chain of Hunan cuisine, environmental prices are not bad.


Tips:
Choose a restaurant at a bargain price to avoid being forcibly high consumption. 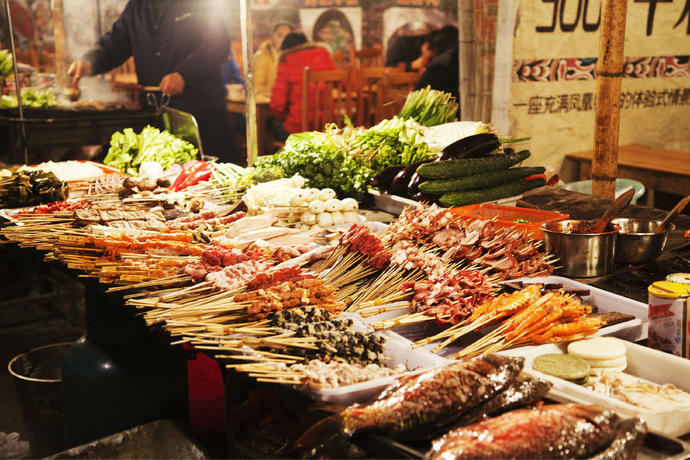 Supper: a lot of tourists choose to eat supper at night, Phoenix supper have 2 places, one is the night market Hongqiao Street, as long as the peak season is full of voices, every stall is full, to the late not necessarily have seat. There is also a night market in Fenghuang County, the new road (now has been moved to Tuoqiao), the evening is also a few hundred meters are placed barbecue stand, the popularity is also very strong, many local people eat Phoenix supper.
Years ago, the online Raiders said the new road compared to Hongqiao head barbecue a lot cheaper, in fact, the development of the price of the two places now taste almost. But locals go to the new road because of the convenience. But for tourists, to the new road to eat barbecue is not very convenient, the road is not familiar with easily lost.


Phoenix how to consume the bar?

Fenghuang many bars in the ancient city, mainly located in Tuojiang River on both banks. The interior of the bar is very original and natural. The interior is made of wood, which allows visitors to read books, drink tea, surf the internet and even write down their voices on the specially designed walls. 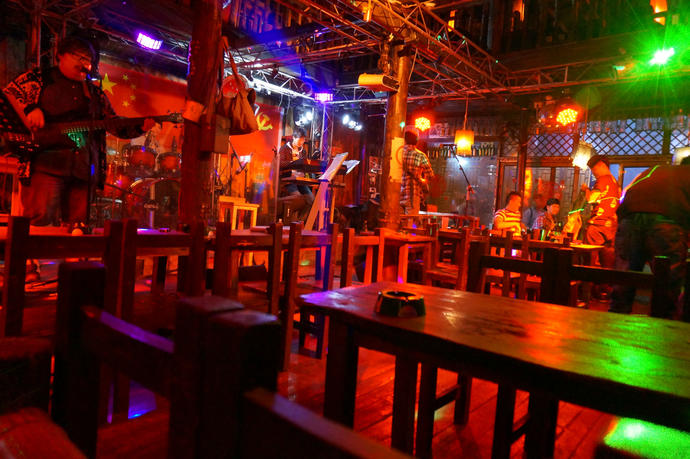 Phoenix Bar is basically divided into two categories:
1. Clear it mostly distributed in the streets of Huilongge Street along the street. There are westerly skinny horses, Donohue, the story of the time, there is also part of the distribution in the South Street, far away, India house, and the Huilongge Diaojiao group across the fledgling Utopia and so on. Consumption per capita 30 to 50 yuan a cup of coffee, tea is basically about 30 or so. The student party to make up the atmosphere, then go in and drink a cup sitting still listen to music.
2. downtown, then stop in the first half of Huilongge Ancient Street wins Tsui House a few, according to the bar, along the bar, watchmen Bar, Huilong Bar, Han and Tang Dynasties bar, a bottle of beer at 25 to 40 between.
As for the casual cafe that is really too much, per capita spending is basically 30 dollars are indispensable.


Travel hand letter, what is worth buying? Where to buy?

As with the major domestic towns, the Phoenix is ​​full of tourist shops, selling things are similar, ethnic clothing, jewelry, bags, silverware and so on. In fact, it is better to buy small things to the alley side of the small stalls, Miao Grandpa, sister-in-law on the bamboo basket with a variety of beautiful earrings, scarves, bags, cushions, as well as their own handful of small cotton shoes, fine. Because there is no facade, the price should be much cheaper. Urban management increased in recent years, stalls are concentrated in the South Street area - here has been planned for "a street art process."


Tips: After
bargaining must buy, do not bargain after not buy! 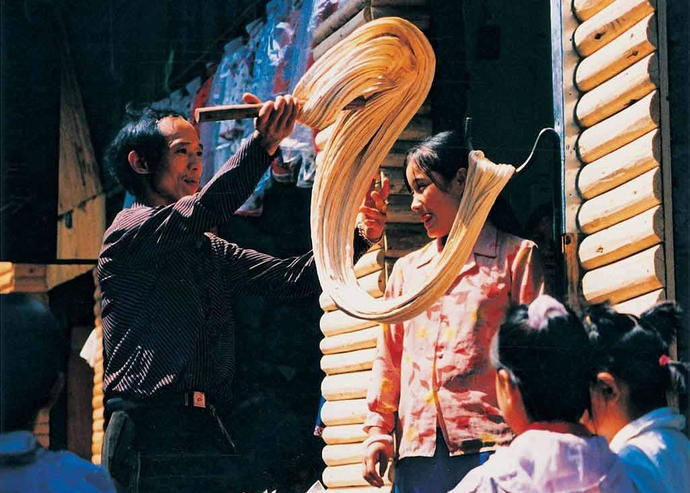 Can be seen everywhere, a five-step shop, a step-by-step shop. From the number of ginger candy shop is not difficult to see how little profit of this little Phoenix specialty. The number of stores, well-known there are several, Zhen Zhang Zhen, Phoenix legend, ginger sugar prices are also uneven, under normal circumstances, you can buy 5-7 fold according to the boss asking price.

Phoenix is ​​only two of the most famous, Phoenix legend and bullfrog Duck. Place opposite the ancient city museum, Zhu Rongji inscription (Phoenix City) Office. However, the price is relatively expensive.

Western Hunan bacon production has its own unique technology, authentic bacon is to go through a long time roasted to shape. Many businesses are relying on tourists do not know bacon, just a simple smoked meat on the grass for sale, taste no bacon taste. This distinction is very easy to cut the bacon to see the cross-section of bacon, if dark outside, but the flesh is red, tender, that is generally the speed of processing, not tasty.

Never believe that street stalls have real silver, Miao silver (real silver must go to the formal big shop). There are roughly two kinds of silver in the Phoenix selling places, one is a special silver shop, selling relatively expensive. The other is all over the ancient city of Miao and Aunt stalls in all corners of the city, selling silverware are basically fake, buy it, cut directly from 2-3 fold. Silver, then a little expensive Oh, not as cheap as before, a little better to a dozen dollars a gram.
When Miaozhai some tour guides will recommend some other expensive silverware shop, do not impulse spending oh, remember a lot more, you know.


Want to wear national costumes take a picture? You have to pay attention! 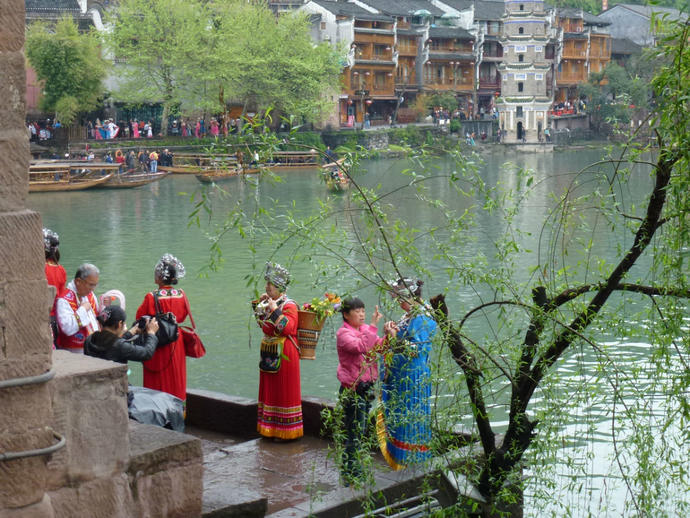 In the Phoenix Tuojiang Miao Zhuang wear photo equipment is one of the major features of the ancient city, often to the ancient city of Phoenix tourists will wear Miao Zhuang photo according to a feeling under the Hmong style, leaving a beautiful memory. Although it is a beautiful thing, but how many will be some unpleasant things happen. So now to teach you how to avoid these consumer traps.
Suggestion one: ask Qing clothing fee. Many tourists are asked directly how much is a photo, did not ask for clothing or money, the results checkout, the cost of how much each set of clothing, the time to dumb to eat Coptis!
Second proposal: buy a photo. They would say it better when they were taking pictures, that is, getting you more styling and getting them to shoot. The result was a whole lot of washes and less of what they said were you stingy. Experience talk: Want to stay a few photos and more photos, just want to stay for a souvenir, less photos.
Suggestion 3: Confirm the quotation again and again. Some businesses offer vague, which needs attention. They generally offer 10 yuan two, you can talk about 10 yuan three, but they give you 10 dollars 3 is the size of that small. After the shoot and then tell you a small photo paper no more, only washing large, so you have to add money. The result of 10 yuan a, 20 yuan a, more than 50 a, often being slaughtered unclear.


What else do not do? 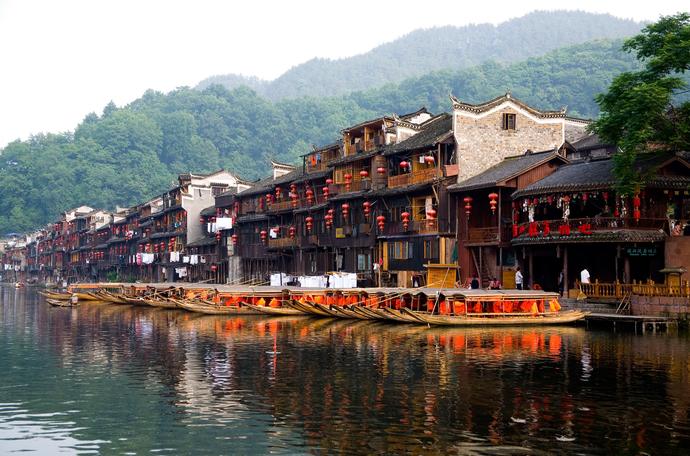 1. Do not trust any street soliciting. Whether it is accommodation or a day trip or do not want to eat all do not listen.
A word let each other give up. If you are traveling by car Phoenix, then when you enter the Fenghuang County, you will encounter a lot of enthusiasts who come for you to guide and provide help, most of them are men riding a motorcycle, the woman get off the window for your guidance . If you want to say no, you can tell them that everything is arranged so that they do not end up hitting the porcelain. Unpleasant things often start like this.
3. Do not petty cheap, there is no free lunch in the world, this sentence is very popular in the Phoenix.
4. When shopping their own things must pay attention to the back of the bag is their own, behind may be someone else's. More mind to stay more.
5. Shopping Most things you can bargain, this grasp on their own, I feel reasonable on it, at any time can not have the so-called lowest price.
6. Do not bring coins, Phoenix basically do not charge, while the other toilets are basically one to two dollars.
7. No matter what you buy, what to eat, be careful not to follow someone behind (sometimes deliberately close with you, let the boss think you are together), they will secretly tell the boss that you are her guests ( The boss does not know), then they eat kickbacks. Rebates of course, the boss added to your body it!
Although there are some small tricky when traveling in Phoenix, but in general there is nothing to be particularly worried about, will not affect your travel mood, the province's money province, the money spent!

Finally, I want to say to you