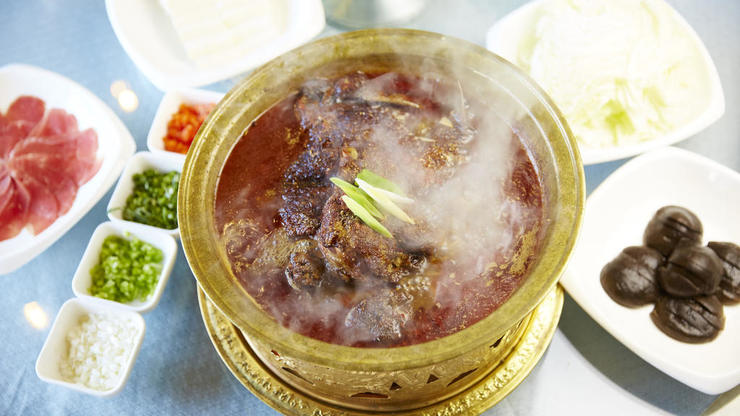 I have tasted a lot of Beijing's deep courtyard in the so-called "state banquet", they have a bad problem, the food is not the entrance, the first row of people to live, delicious not eat into the words. Into the shop people, all the like people into the Forbidden City
For many people, this is the whole meaning of eating the palace dishes. Pay attention, authentic, there are children, really put himself as the emperor. Although, from the perspective of cultural heritage, the appearance of decoration, the amount of food, can be considered part of the heritage, people realistic exposure to the historical scene, but also a kind of elegant taste.
But I still hypocritically think that the restaurant on the return to "eat" itself. Stomach is the most honest part of the body, pomp and then grand and then grand, and others wiped his mouth out of the door, talking about, or really good question.

Today recommended a restaurant, do the country banquet, but it is different. It is not full of seats in Manchu seats, not glass crystal lamp, but inherited the four or five generations, the continuation of the decades of the essence of ancient technology. It is like a sage as Sven subtle, hidden, is my reason to patronize again and again.

Royal kitchen blood and nearly a hundred years of heritage

The Senate is a royal family. Founder of Wei Jinting, one of Beijing four small chefs, Beijing Hotel Sichuan cuisine chefs. 20 years old to accept Premier Zhou's interview, had with Chairman Mao in Beidaihe on the same stage, Chen Yi Marshal in the Diaoyutai three he did the "lantern chicken" is a veritable "royal kitchen" origin.
Wei Jinting division with "Beijing four chefs," said the Sichuan master Luo Guorong. Luo Guorong in the early liberation of the Beijing Hotel chef, over the years received Indonesian President Sukarno, Prince Sihanouk and other foreign guests numerous, also for Zhou Enlai, Chen Yi and other spoon. Shizu Huang Jin Pro is another important figure in the era of modern Sichuan cuisine. 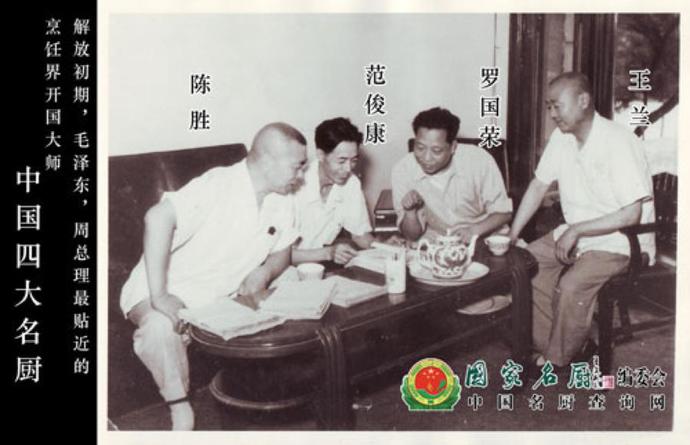 The Senate of the recipes, most of the year to retain the Beijing Hotel dishes - Lohan belly, Chen will chicken, onion burning sea cucumber, crab lion head, are some of them after Wei Father's improvement. Of the country's feast dishes are derived from this origin.
The boss always said that the ancestral craft can not be broken. Of the "Senate", but also take the "Senate", "reference", "learning" meaning. Now eat, is the inheritance of the four generations of people's craft, when the national leaders and guests among the dishes, and now can end to us in front of the taste is almost no difference. 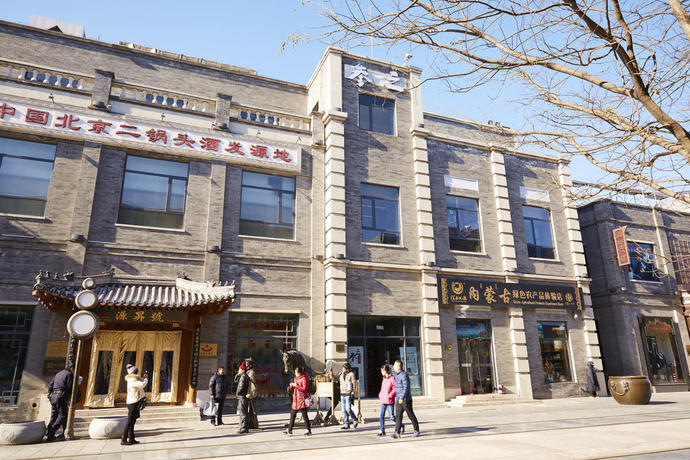 The restaurant is located on the front door of the street, a three-storey building

The Senate opened in June this year, Zhang, downstairs is a collection of tourism army front door street, the facade is not large, partial to a small house on the third floor, head up too old, only Qiao see signs.
Tourism off-season, Qianmen Street desolate clear, north wind has always been. But if with a glutton, the store is not difficult to find. 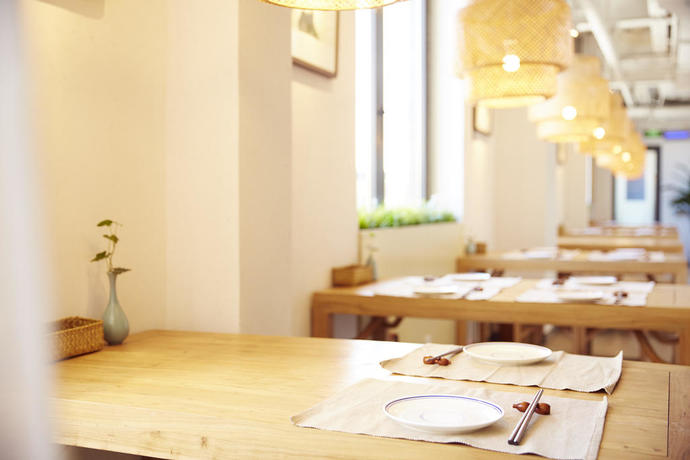 Shop before and after, but more than a dozen tables, presumably did not start to do a group meal business abacus, purely inherited a craft, no fortune he wanted to get rich. The boss said that one day he will Wei Father's recipes compiled into a book, so that the old craft will not be lost. 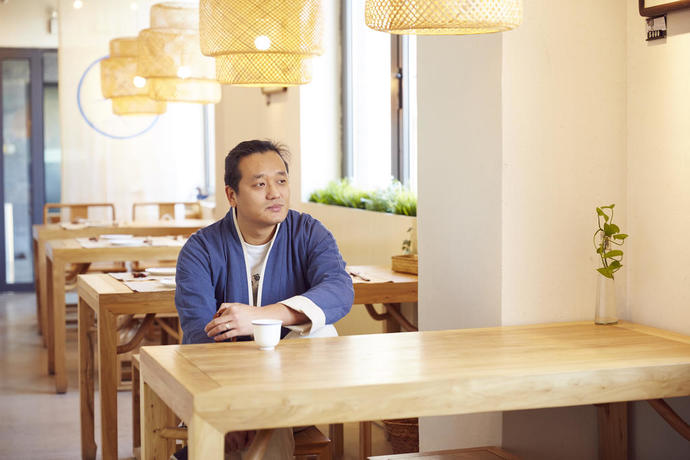 The boss is not true

The current director of the Senate called no real, always dressed like a fairy wind Taoist, a cotton and linen clothing, hair tied into a bun, hand to the back of such a ride, or holding a cup of tea.
So here is always people mistakenly believe that the vegetarian into the restaurant, if not explain, can not guess here is doing eight children of Sichuan. Seems to be deliberately look lively, the boss wearing a crimson, clerk wearing a bright yellow, the United States is beautiful, but still plain. 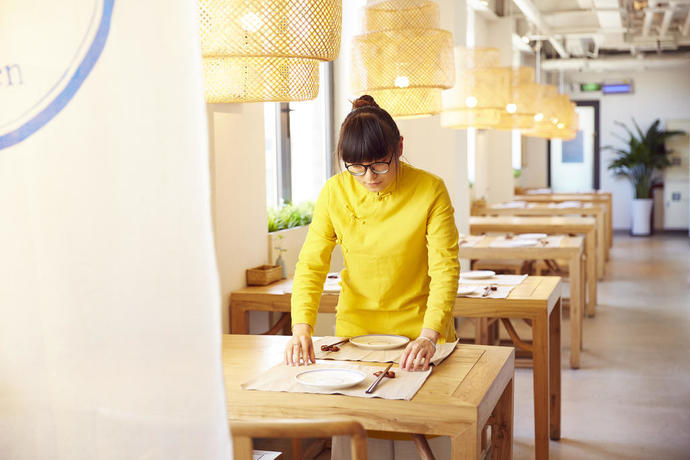 The clerk is also wearing a bright yellow hemp cheongsam

Ancient cooking, royal descendants of the technology and art 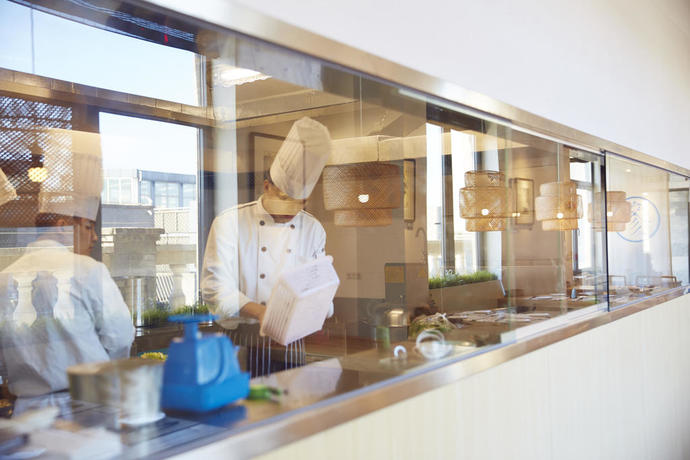 Now Wei Father on the age, but also often appear in the back kitchen, mainly control products, teach him to help the disciples. The master of the palm of several young chefs, all from the basic start training, all "door people". Master looked at the ingredients, after tempering even after the worship of tea, but also no other. Big as the day, the rules as big as the day, is the kitchen since ancient times so far the truth.
State banquet is equivalent to Beijing cuisine, probably a lot of people misunderstanding. Banquet Quartet guests, the most important thing is to taste the essence of the world as much as possible, so the state banquet brought together Chuanxiang Lu Guangdong Huaiyang and other major dishes of the long. 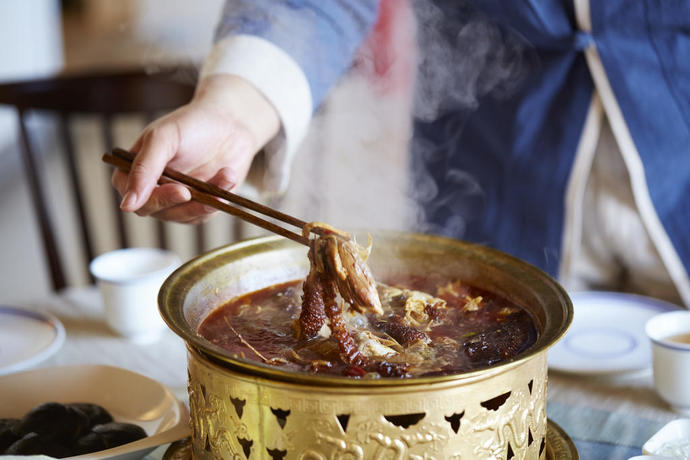 Meat fresh and tasty, soft and not bad

This is the general Chen chicken , Chen Yi is said to be a good heart, because every time the hotel will be Beijing, so Chen name title. The whole chicken brewed a variety of auxiliary materials for two days, soft and not bad meat, color red, delicious taste. But because of work complex, not every time to eat.
This course is supporting the [generals package], there are said to have a chew head, a large amount of 2-3 people can eat special support Book one day in advance. 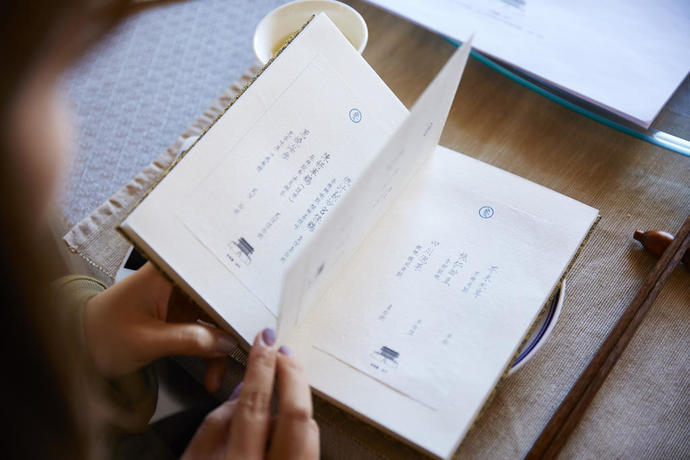 Play the hand to do the menu

The boss in the need to book the dishes behind the brackets, write "relics", that some people want to eat but not, and some hidden recipes, it is talented people to eat. This is like the same hand-made menu, probably the whole shop the most old Beijing flavor details. 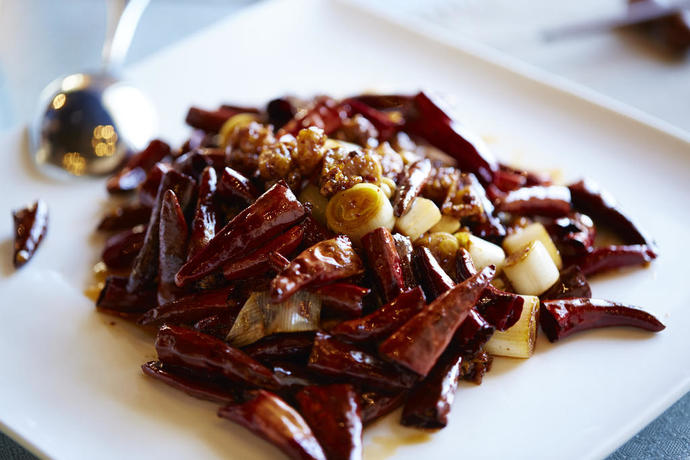 This Road, burning juice fried fried palace fried chicken , with my heart is not frightened frozen chicken breast, but the whole chicken Eviscerate, a chicken can only cook two dishes. Chicken tight, peanuts and dry pepper stir the degree of just, crisp taste. 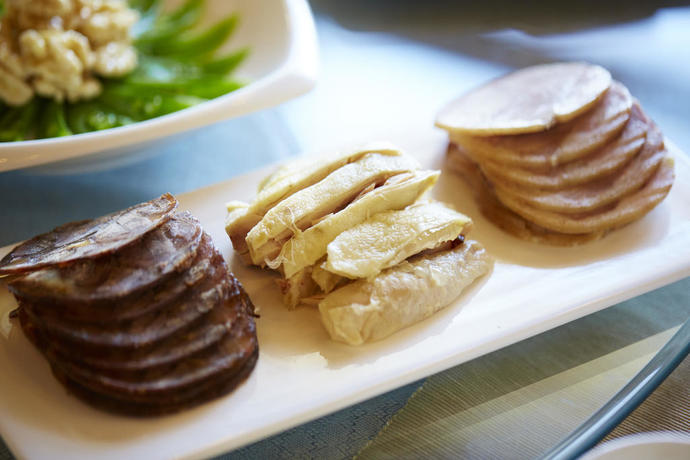 C dirty three, like three of the production is also quite sincere, take the peas of the Lohan belly taste the most amazing, refreshing is not greasy, is difficult to see the practice. 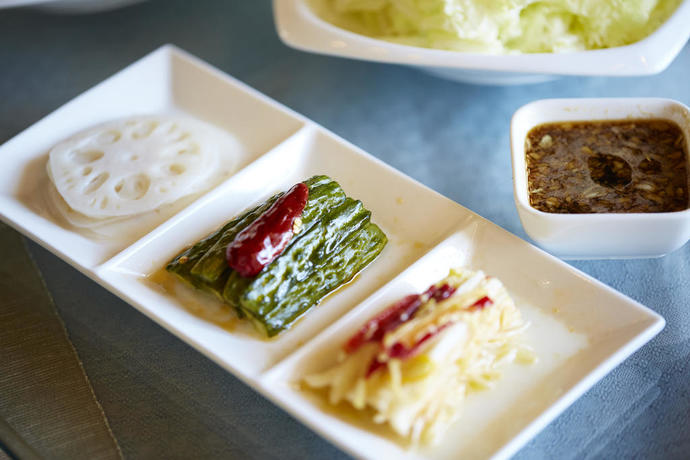 At the beginning of the liberation, the Beijing Hotel was responsible for the hospitality of foreign guests, so in the Senate can eat creamy broccoli such Western stuff. 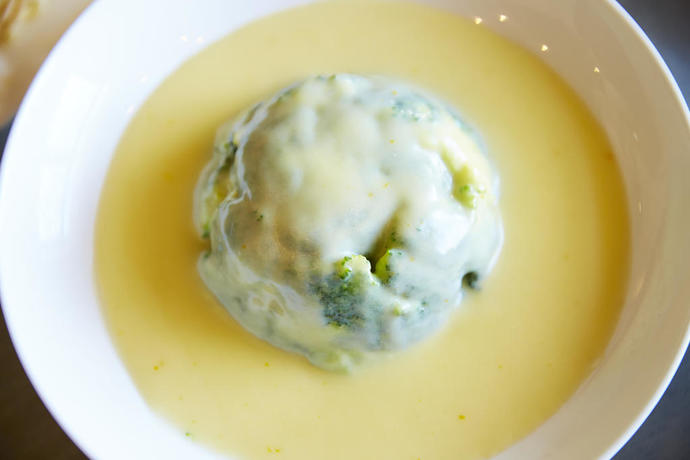 Since the Sichuan occupation of the world, people around the world seems to feel that China is only a taste, spicy. Spicy to sweat and nose mixed flow, spicy to stomach pain spicy spit, that is really Sichuan cuisine. The tongue of the Chinese people is paralyzed to this child, is some sad.
In fact, it is not difficult to find that many Chinese restaurant food taste like the same, each recipe seems to remain unchanged for one year. This is also enough to save some half of the bowl of water cooking room, can not make the flavor, add spicy on the line, not knowing that Sichuan is "a hundred dishes, a dish of a grid."
Under such circumstances, the participants can think of the legend, think of recipes can not be broken, the essence of Chinese food can not be lost, hope to make Mianbozhili, bring a little different breeze, is the most rare place.

The so-called stress, but the details of the heart 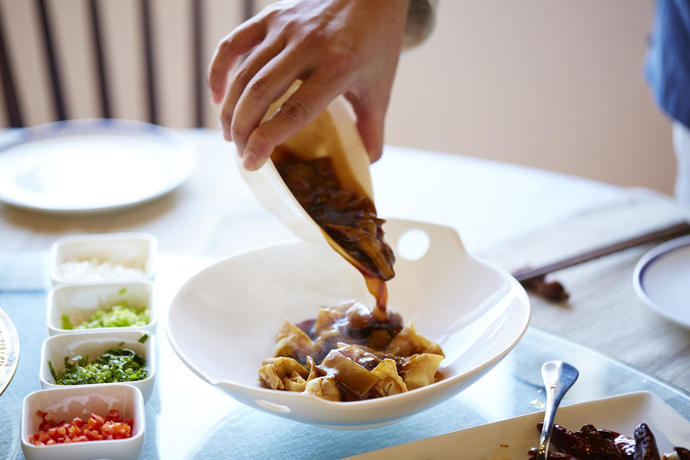 Often come to the participants of the people, most of my regular customers, and must also be very particular about people, much more, there will be a kind of cook here is my home kitchen illusion, and thus give birth to a sense of superiority The Even if it is common people, does not prevent me from the Royal kitchen into my private kitchen.
I often take my friends, especially foreign friends, to come here to try. Can let them eat really pay attention to the craft, is a very proud thing. 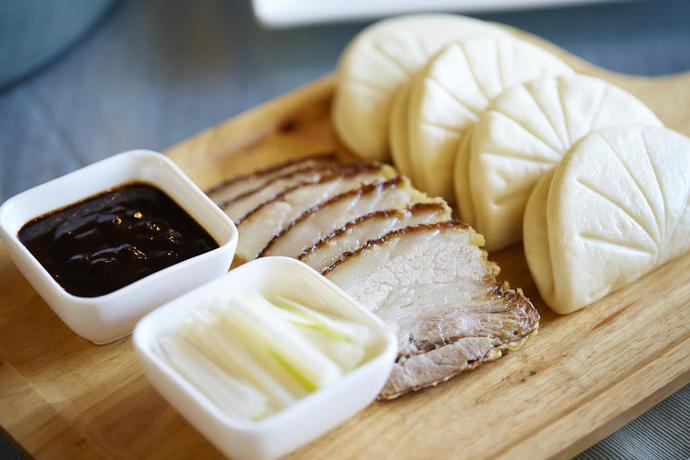 I have witnessed the boss because of a house of pills did not put peanuts and the whole dish re-fried, that scene like my grandmother in the vegetable market in front of a rotten leaves preoccupied. Child does not understand that this is the so-called court treatment. I now eat all day with MSG and additives, her old man if the spring know, it is estimated mad.
In all the taste, such a homemade taste is the most subtle, like no time to fall on paper secret, by the elders of the craft and the child's memory was able to pass.
The chefs are dodging the authentic cooking, I sincerely admire, but the most let me touched, not a red twisted pillar need to spend 6 days of work, but even a clear fried broccoli, but also determined to Do not give chicken under the premise of fry aroma.
"Technology" and "art" between, only art enough to move. 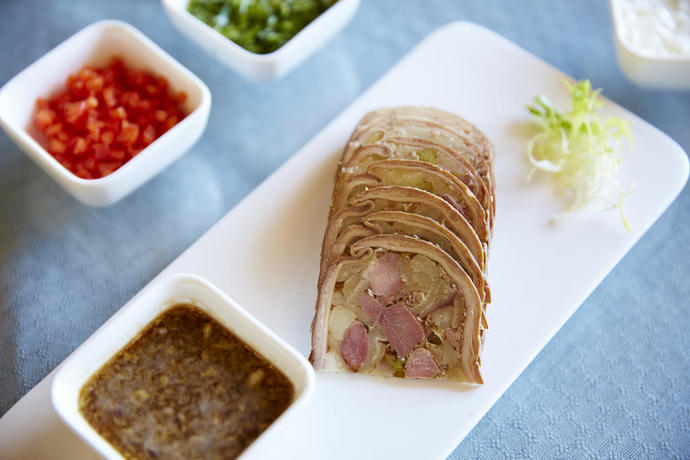 The so-called stress, but the details of the heart Bale. In fact, I do not always care about the menu is not enough gorgeous, whether it is from the Great Hall of the people does not matter, this is not a tour of monuments, I do not have those who do not have the same kind of love to eat the same thing. I only feel warmth for this heart. 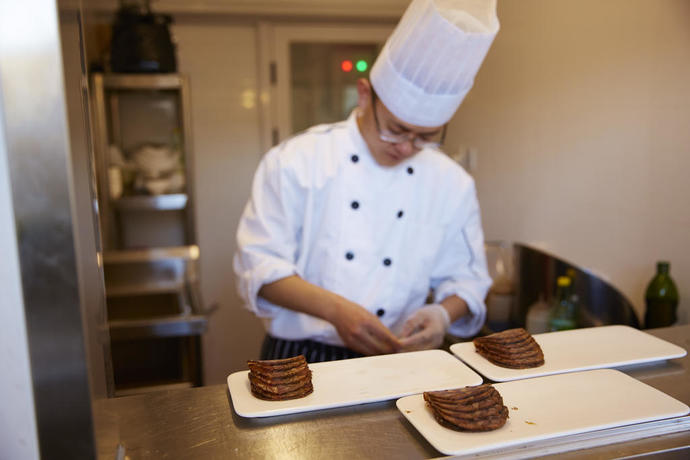 Western-style chef clothes, but it is authentic Chinese craft

I always think that food can be delivered in good faith. In our life to eat into the numerous salt, can accidentally find that some of them are carefully for you, after all, a happy. At this moment, we are actually beneficiaries of love, respect for the food and love. 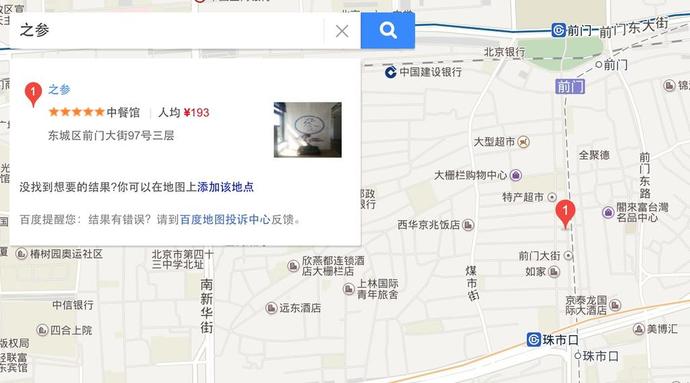