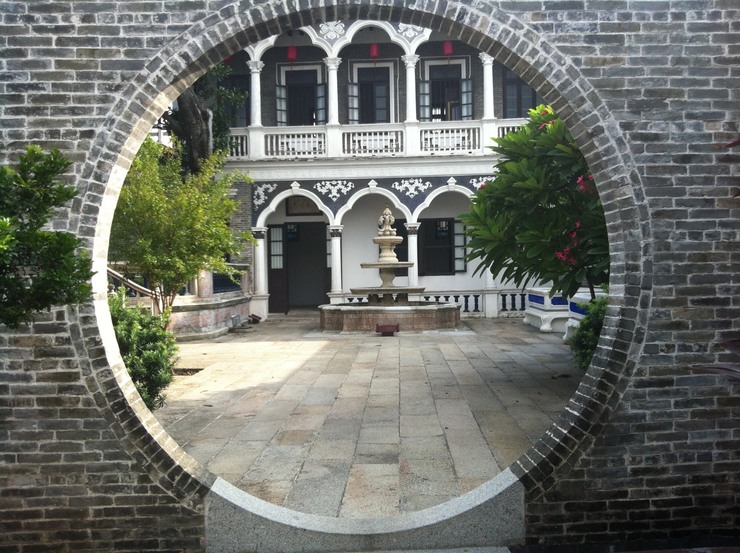 Shunde Lunjiao Mingshi Garden was built in the reign of Qing Emperor Guangxu. It has a history of more than 130 years and is the home of He Mingshi, the richest man in Shunde of the late Qing Dynasty. Among them, the style of the courtyard courtyard is very distinctive. The main house is the old-style “pot house”, the Western style is a Baroque-style little Western style house, and the private garden features Chinese-style kiln and Baroque-style arches and fountains. As the most luxurious garden house in Shunde, there is no one else in the area. In terms of scale, though it is less than Qinghui Garden, it has an indescribable exquisiteness, and there is a gorgeousness in the waste.
Due to the lack of awareness of cultural relic protection, some buildings and gardens around Mingshi Garden have been destroyed, and some have already been sold to factories. The scope of the original stone garden was very large, but at present there are only more than 2,000 square meters, of which the construction area is 1,100 square meters.
Due to historical reasons, Naishi Garden was split into three parts by the village residence and the small workshop, the courtyard building, the main house and the outer house. Although Ming Shi Garden is no longer "perfect", it is still full of charm like Venus's broken arm.

He Mingshi, born in Lunjiao in 1886, was a business owner at home. His father, He Pingsheng, went to Malaysia to make a living in the early years and partnered with friends to make gold ornaments business. In 1898, 12-year-old He Mingshi studied in Malaysia with his father, and later he inherited his father’s business. He served as the gold shop manager of He Guangchang, Ipoh in Malaysia, and operated gold ornaments, satin and rice machines.
He Mingshi, who is economically sensible, has made his father’s small business bigger and bigger. He has opened stores in Taiping, Ipoh, Medan, Hong Kong, Guangzhou, and Shunde, Daliang, Rongqi, and Leliu. The He family has entered under He Mingshi’s leadership. The "Golden Age." At that time, He Jiabao was already rich. He Mingshi was even considered the "richest man" in Shunde at that time. 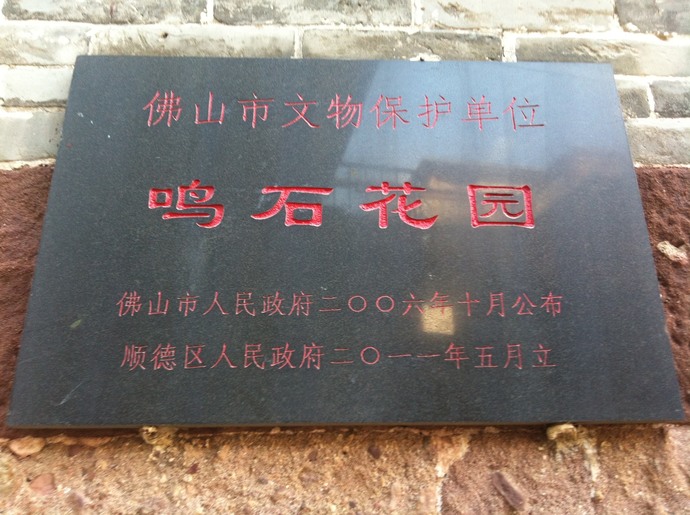 The rise and fall of Mingshi Garden

As a successful businessman, He Mingshi purchased a lot of real estate, carefully built this Chinese-Western house, and lived a livelihood. On the other hand, He Mingshi was enthusiastic about public welfare. He was the founder of the Shunde Memorial Hall in Malaysia. One of the people. At that time, many people in Shunde were sold to Nanyang as “piglets”. Their activities in Nanyang were turbulent, displaced, and often bullied. He Mingshi felt like the others and initiated the founding of the Shunde Memorial Hall and decided to help these helpless fellow countrymen. Due to his estrangement, He Mingshi was very prestigious in Shunde, Malaysia, and became the leader of the local compatriots. The current Shunde Memorial Hall still hangs his photos.
In 1936, due to acute cerebral hemorrhage, He Mingshi died of illness in Malaysia at the age of 50. His only son, He Yaowen, inherited the property from Mingshi Garden. After the founding of New China, other relatives of He Mingshi also moved to Malaysia to live. In the garden, only his four sister-in-law and five-star Taihe lived with a few ethnic groups and servants.
Ms. Sihe Taihe was not dead until 1996. During her time in the world, Ms. Ho actively supported the construction of the country. In 1954, she also invested 100 million yuan (old currency) from private savings to Shunde County Overseas Chinese Trust Investment Company. However, Wu Xitai was not so fortunate and could not bear the burden of life.
The Ho family ran away from each other and only the lonely old house was left. However, due to the large number of houses and elegant environment, Mingshi Garden became a temporary office of the then-threshold commune after 1961. After that, the group of sheep’s brigade also worked here. It was not until 1986 that the new building of the village committee was completed. Move out of Naishi Garden. With the rapid economic development of reform and opening up, some small factory workshops also moved into Mingshi Garden, which resulted in the division of the Mingshi Garden.

The courtyard building is the first stop to enter the Ming Shi Garden. Although the existence of a small workshop has more or less undermined the ancient atmosphere here, the tall and thick building of the courtyard still defies the gas field. 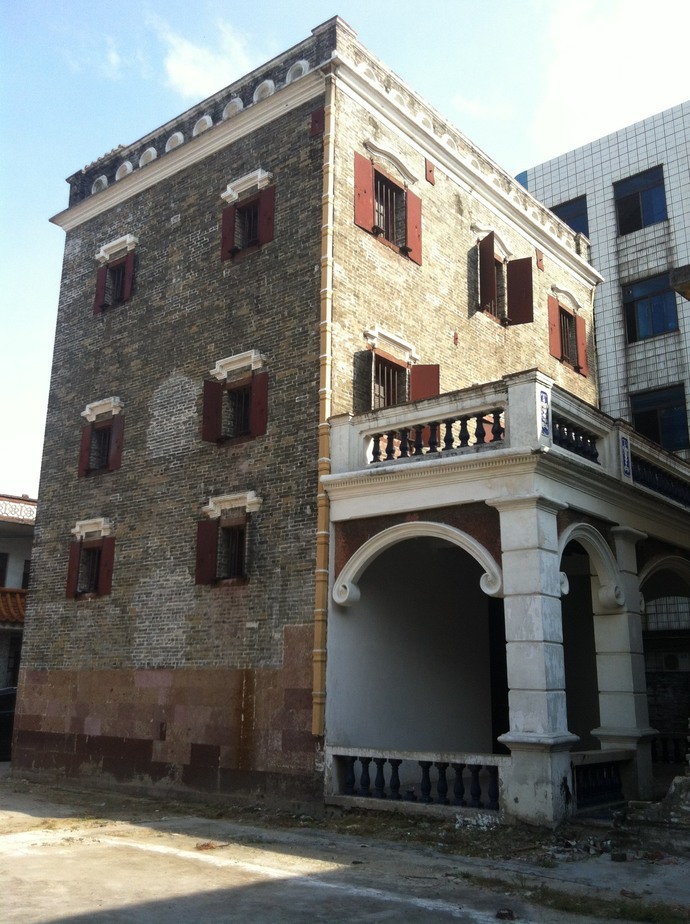 The courtyard is 14 meters high and is a three-storey building. At the time of the late Qing Dynasty and early Ming Dynasty, the courtyard of the Mingshi Garden was the tallest building in the sheep's village. Standing at the top of the building, a panoramic view of the sheep's worth was made. The walls of the small building are built by three bricks. There are only two small doors in the entire building, and a “door pressure” is added to the door. The windows were opened very high, and all the iron columns were used as guardrails, comparable to the current security windows.
He Mingshi, the owner of Naruishi Garden at the time, was said to have too much money, so he recruited a lot of bodyguards and formed an internal self-defense armed group. This building is the headquarters of the bodyguards. ”

Along the path on the right side of the courtyard building, through a small factory workshop, after a dilapidated cloister, there is a stone path in front of it. This is the second station of the Mingshi Garden - the home of the He Family, which is also the stone The most exciting place in the garden, the spark of the glory of Lingnan and the gorgeous atmosphere of European style. The Ho home is roughly divided into three areas: living accommodation areas, gardens, and Xiao Yang Lou. 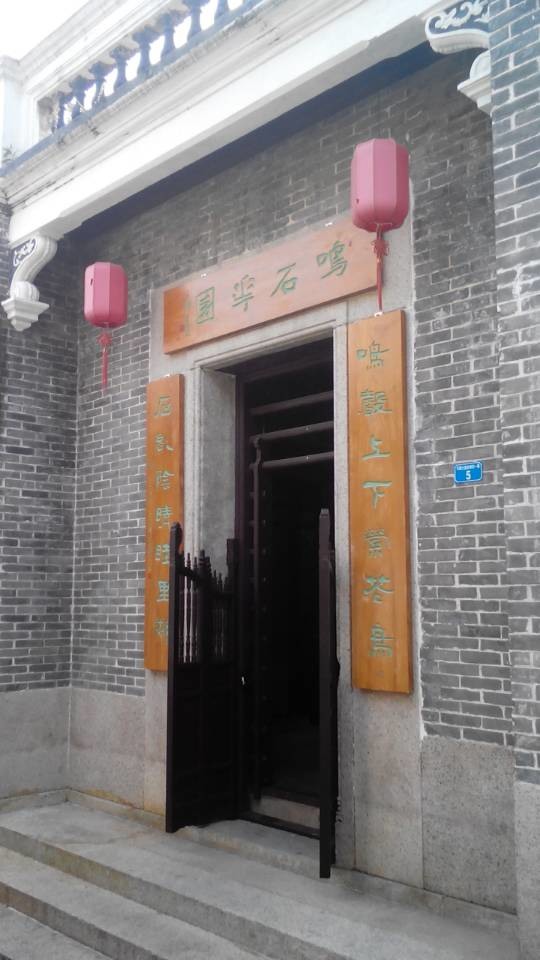 There is a main hall and four houses in the residential area. Mr. He Mingshi has a dormitory with 8 people and has a son and a daughter. He and his wives lived here separately. The building is mainly constructed of brick and wood. There are traditional blue brick houses, squats, and exquisite screen doors. The ear houses have tall, thick ear walls, and the walls are also decorated with exquisite gray plastic beasts. One of the large houses contains two sheets of gilt-and-gold flowers, which are old but still extravagant.
There is an escape window in the large house behind the main hall. It is considered to be He Mingshi's room. When there is an emergency situation, just remove the active iron branch of the rear window and the person in the house can successfully escape. 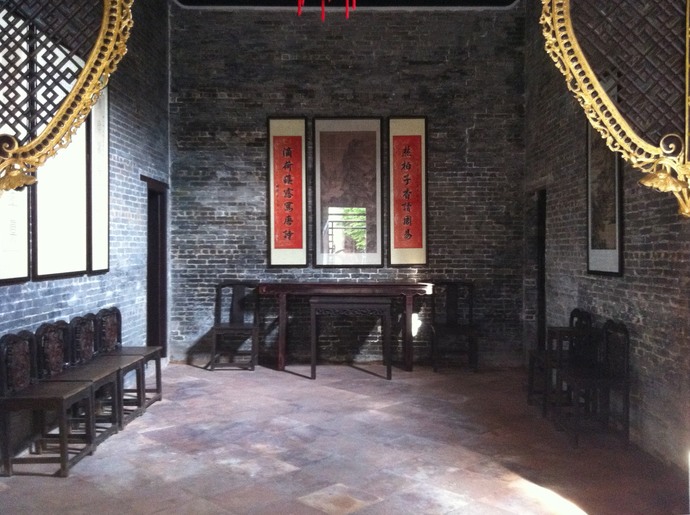 One of the four houses has a water tower on the roof. It is said that Naishi Garden was the earliest place where electricity and tap water were used for the sheep. At that time, the families of the family enjoyed an advanced life. And the owner of this house is exactly what Mr. He Mingsheng likes. Ms. He Huikuan, Mrs. Four, shows that her status at home is not ordinary. Mrs. Si’s wife is not only a beautiful girl but also a master of calligraphy. She even speaks English and enjoys what Hemingsheng likes. 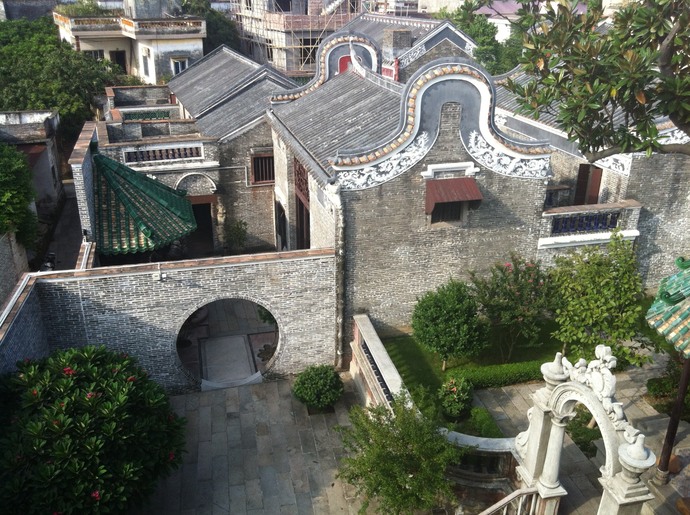 He Mingshi, who is a “sea returnee,” has a keen interest in Western-style architecture, and in addition to his strong financial resources, he invited the designer in Nanyang to add some Baroque-style buildings to the original old house to create a Chinese-Western combination. Stone Garden. It is said that glazed tiles and floor tiles used in gardens are all imported from overseas. When the traffic was inconvenient, it was difficult to imagine. According to Wan Zhihong's calculations, it would take at least four years to build such a splendid private garden at the level of that year's craft. 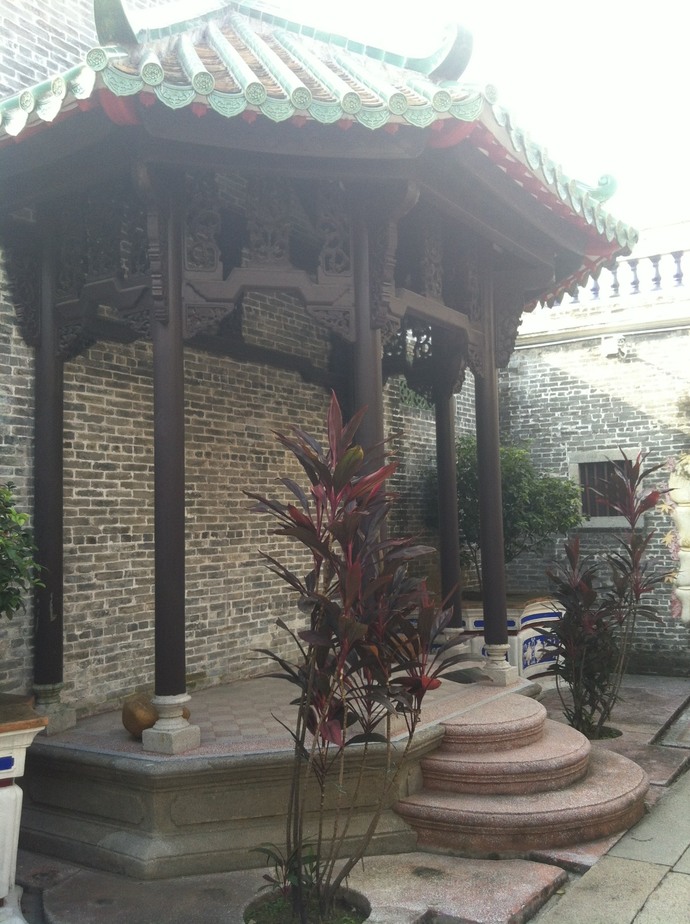 In the middle of the residential area between the living area and the garden and the small western building, it is separated by a traditional Chinese stone round door. Looking through the round door to the garden, the first European sculpture fountain is in sight, and the left side of the fountain is a Baroque-style archway. , leading to the octagonal guting. The arches sculpt a dark purple flower and algae pattern. The exquisite red Roman column fades a bit, but under the backdrop of the imposing century-old Magnolia, it feels like being in a European garden. But when you see the ancient octagon behind the arch, you suddenly find that it is in China. 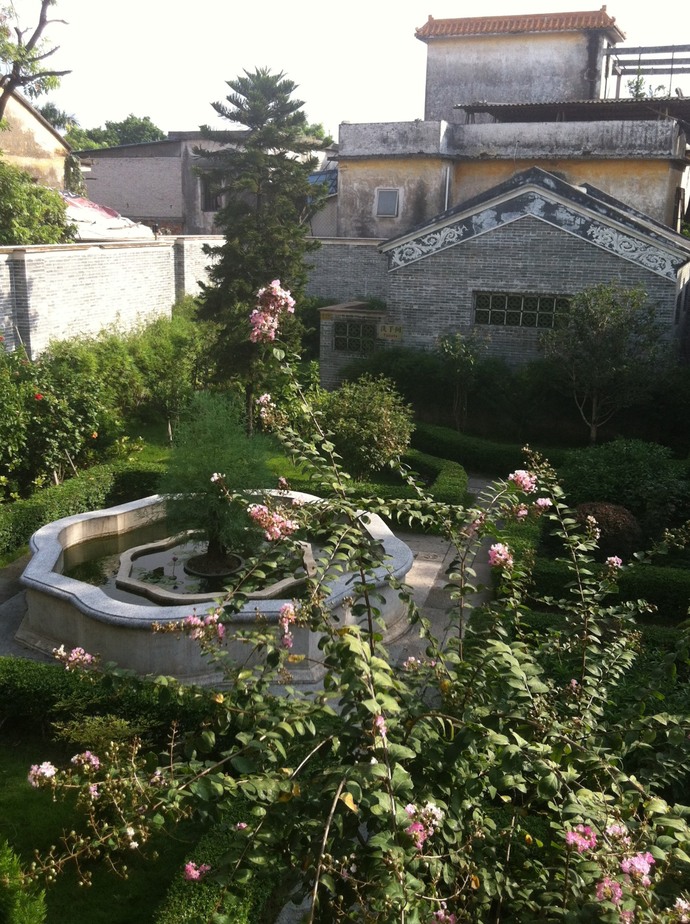 In addition to the combination of Chinese and Western buildings, rare plants in the Garden of Nails are also a highlight. Allegedly, there were many precious tree species such as araucaria, laurel and eucalyptus in the garden, but now most of them are gone. The three existing precious century-old trees are Yutangchun, Guangyulan and mango trees. The only remaining Yutang spring is also imported from the Netherlands. It is also difficult to find it in Shunde. 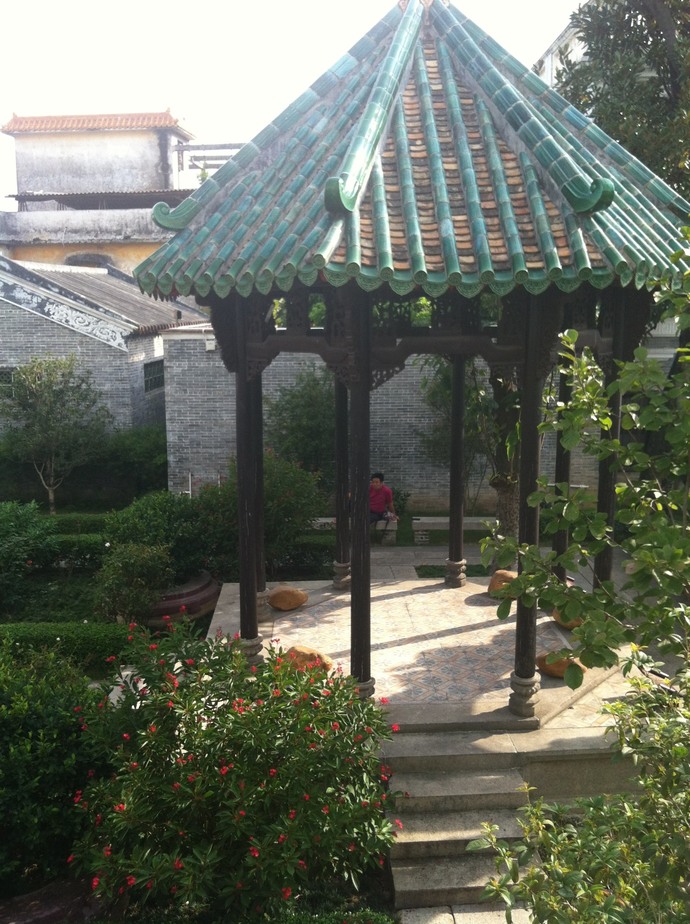 The octagonal pavilion behind the Baroque arch is also known as “Simei Pavilion.” He Mingshi spent a long time doing business abroad. When his mother died, he could not stay with him. Therefore, the pavilion was specially built to hold his grief on his mother. "After the summer months of the summer season, Nanyang, unable to return to home because of impending difficulties, has returned to Jia Ci, and Yu Huai. Shi Ting thought in a timely manner." He Mingshi ordered the family to engrave the book on a wooden board and hang it in an octagonal pavilion. To cherish the mother's thoughts. 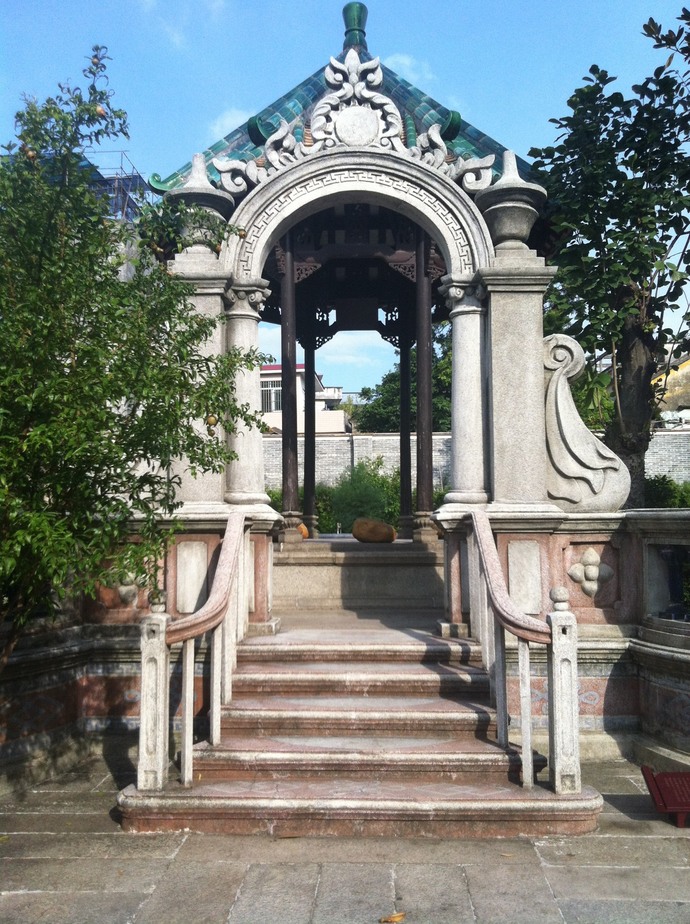 Xiao Yang Lou is the office area of ​​He Mingshi and is specially used to receive guests. At that time, it could be said that the number of political and business names flowed into it. And here is the only small building in Shunde County at the time, and it was also the first batch of western buildings introduced in Shunde. After the completion of the Xiaoyang Building, the electric light was immediately installed, and the power of the small building was directly supplied by the Daliang Power Plant. Therefore, it was also the place where the earliest use of lighting electricity was made. 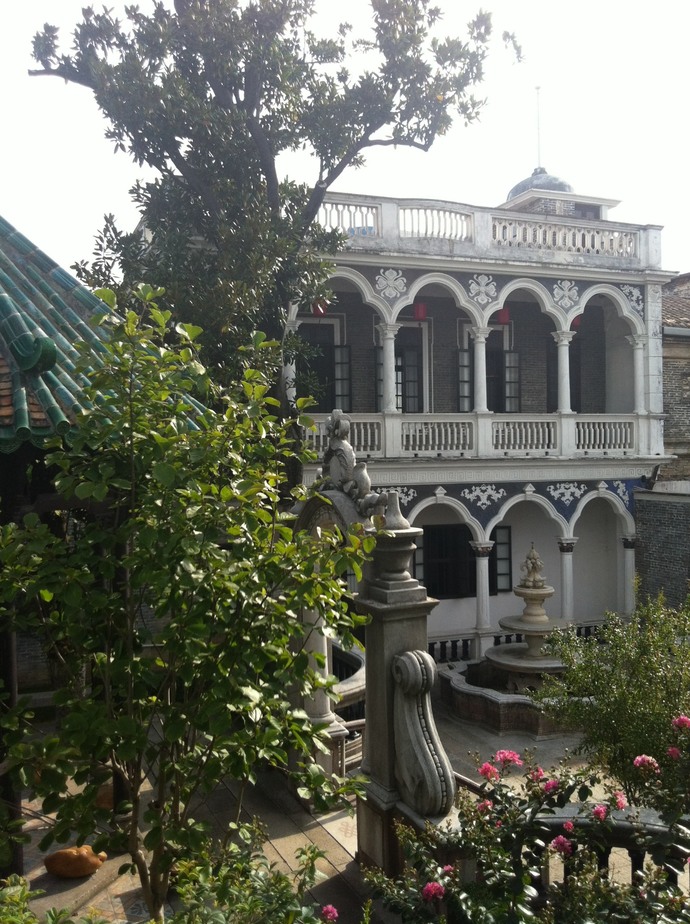 On both the upper and lower floors of the Xiaoyang Building, there is a wide corridor, which is decorated with Baroque-style arches. The stair railings are carved with exquisite patterns. 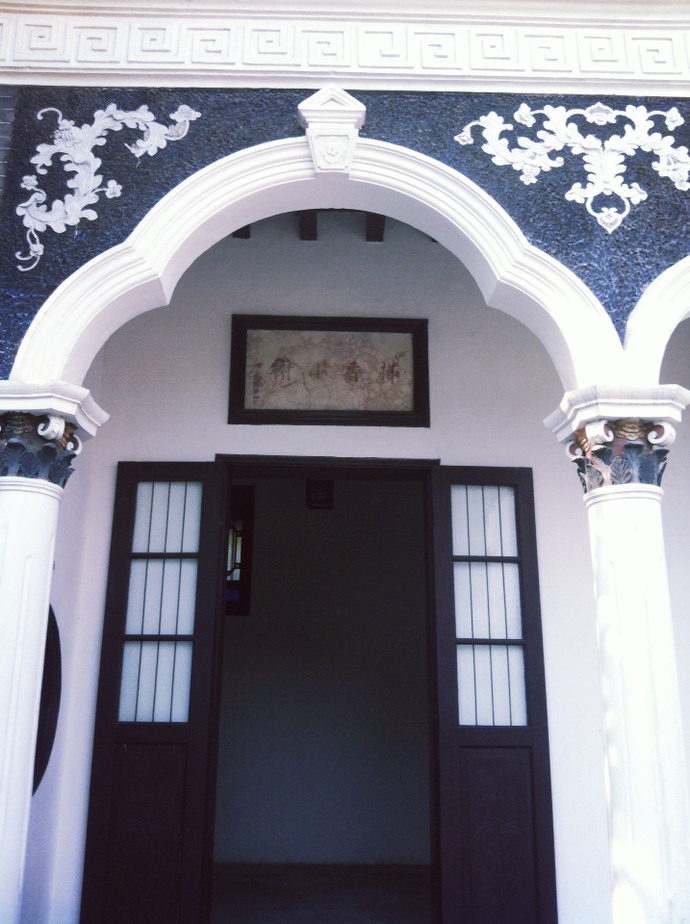 Due to the large population of the family, in the 13th year of Guangxu, He Mingshi purchased a real estate in a place not far from the house (a house separated by a house). This is the outer house of the He family, mainly adopting Lingnan-style architecture. 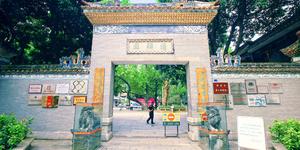