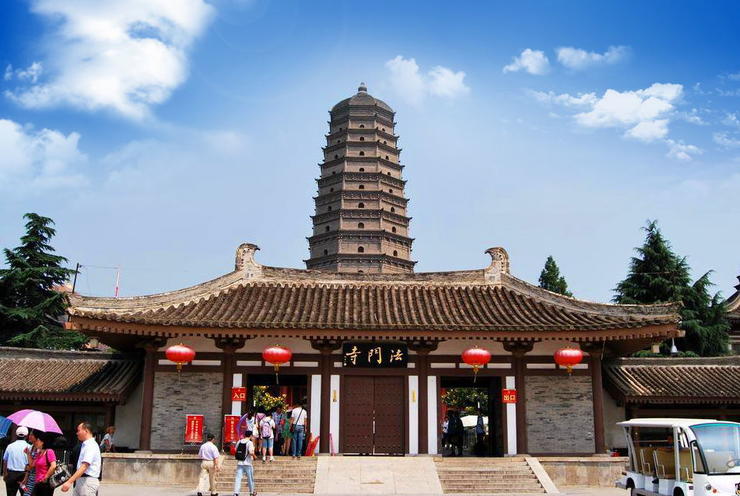 Famen Temple is located in Baoji City, Fufeng County north, almost in the middle of Xi'an and Baoji. It is said that the Famen Temple was built in the Eastern Han Dynasty, has been 1700 years of history, initially called "Ashoka Temple", the Tang Dynasty, was renamed "Famen Temple." In the history of ancient books inside, Famen Temple has been on the Buddha's phalanx relics. Until 1987, a heavy rain caused the dumping of the temple of the temple, the secret of the Famen Temple to be opened. Archaeological staff in the underground palace which found four Buddha phalanx relics, confirmed the records of ancient books. Since then, Famen Temple has also unearthed the world's only Buddhist finger bone relics and famous world.

Buddha Avenue - the way to the pilgrimage of the united stupa 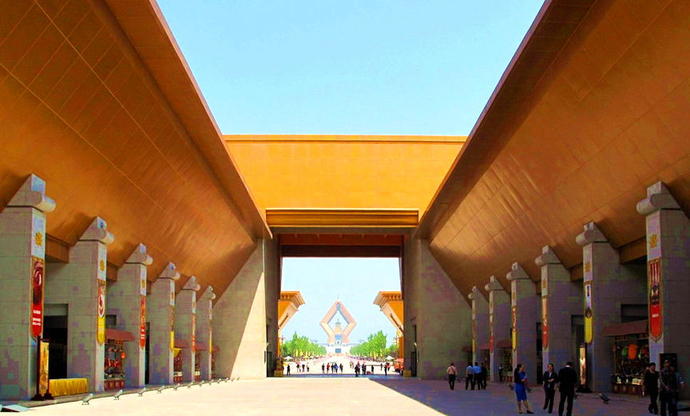 Buddha Avenue is the landscape of the entire landscape of the spindle, from afar, straight through the ten stupa. Buddha Avenue is divided into the main road and auxiliary road. The main road is displayed on the ten Buddha, both sides of the yellow columnar body is the Buddhist holy buildings, it is said that these things symbolize the wisdom of Buddhism, to surrender all the troubles. There are some sculptures on Buddhism, and the sculptures on the east tell the experience of Buddhism in Sakyamuni Buddha. The sculpture in the west tells the story of the spread and development of Buddhism in the world, especially in China. 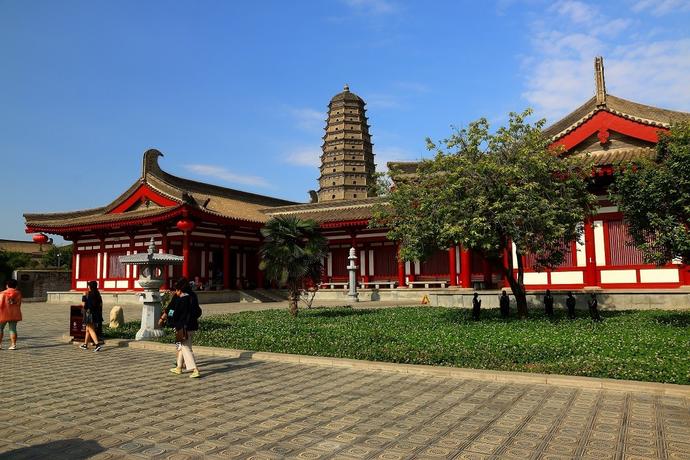 The temple of the Famen Temple is located on the east side of the north side of the Foguang Avenue, where the real monastery of the Famen Temple is true. Can be said that the history of the temple temple, Buddhism spread in China flourishing decline, and then the whole process of light. Northern Wei Dynasty to become the ruins of the Buddha, the Sui Dynasty fire to pay the torch, Ming and Qing Dynasties dilapidated, Republic of repair, Famen Temple silently recorded all this. It is because of the amazing history of this monastery, only today's spectacular Famen Temple cultural area.

The world's only Buddha phalanx true body reincarnation of the land 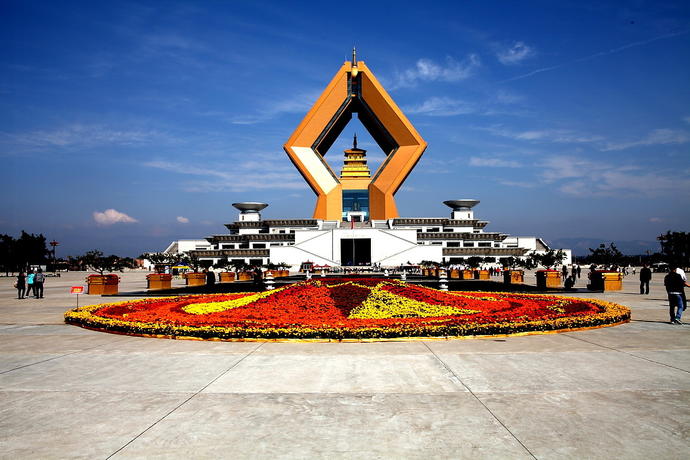 It is a magnificent pagoda building. The tower was built in 2009, is used to place the Buddha's finger relics. The relics are usually stored in the hall of the ruins of the relics. Only the major Buddhist festivals (the first lows and fifteenth day of the lunar calendar), the national holidays, the first four days of the Buddha in April, and the Buddha's relics will be placed on the main tower Of the floor to visit, and only 10 am to 4 pm can see. The rest of the time to come here only to see the Buddha relics imitation of the slightly ~
in the ten stupa can also experience the copy, the table with the scriptures, tables and chairs and roll paper, in the Buddha's shower copy a book by the book, this Absolutely worth the experience!
After the trip to the ten stupa out, there is a special wish wall, and there are staff responsible, you can write their own wish on the wish card, the heart of the spirit, so that the Buddha to help you achieve small aspirations. 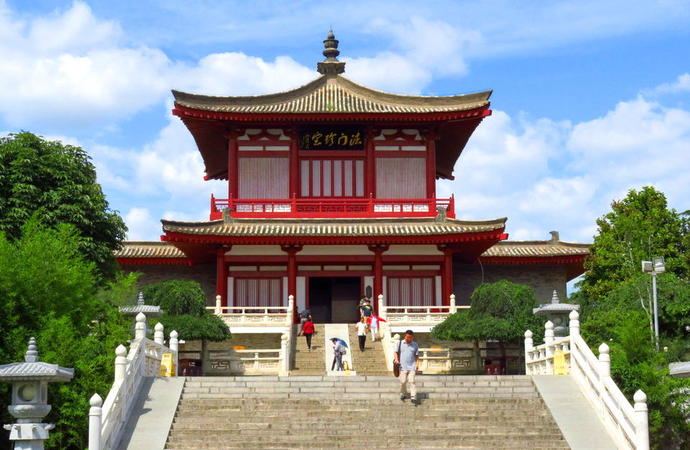 Treasures Museum inside the display of cultural relics, all of the year are Famen Temple palace treasures, one is amazing people's amazing. Which has a lot of Tang royal family dedicated to the gold and silver, as well as the Tang Dynasty emperor queen clothing and many other valuable cultural relics. If you come to the Treasures Museum, then these babies absolutely make you worthwhile trip. 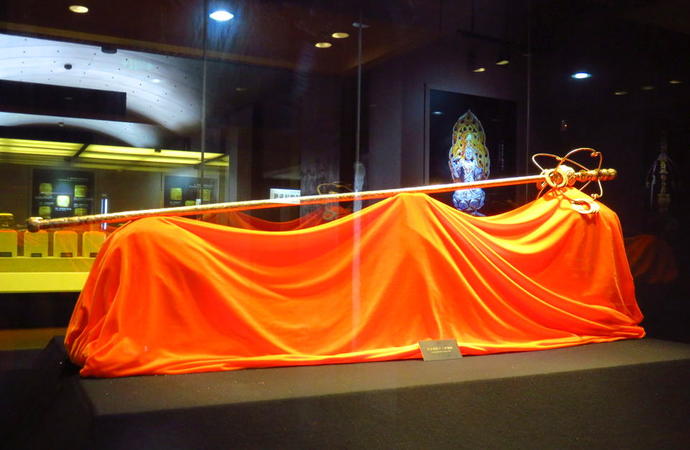 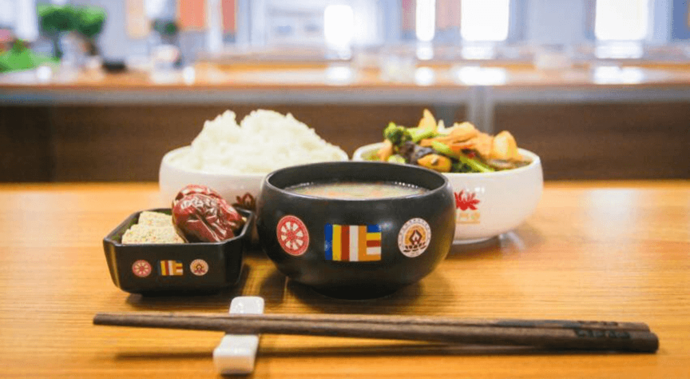 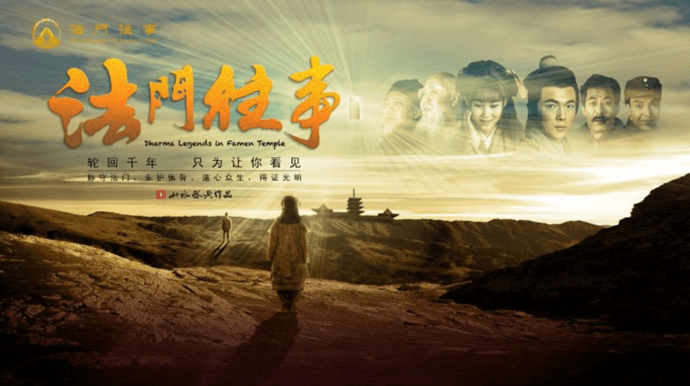 "Fernando" is a story about the history of some people in different historical periods to protect the story of the Buddha's felweave relics. The biggest feature of this show is that there is no fixed stage, so that the audience completely in the scene of the story. Actors and by the high-definition lights, 3D projection technology produced at any time in your surroundings, including the head and foot, and even the same time many performances, you can walk to see! Absolutely immersive, very worth a visit!
Show location: ten stupa
performance time: 14: 00-15: 30
ticket prices: the price of the store price is 180 yuan, from the online booking can offer a lot. 1.2 meters below the children do not vote.

Famen Temple as a large Buddhist temple, the annual specific time there will be blessing festivals, I put the activities of the schedule attached to the following, we can arrange their own schedule according to the time. 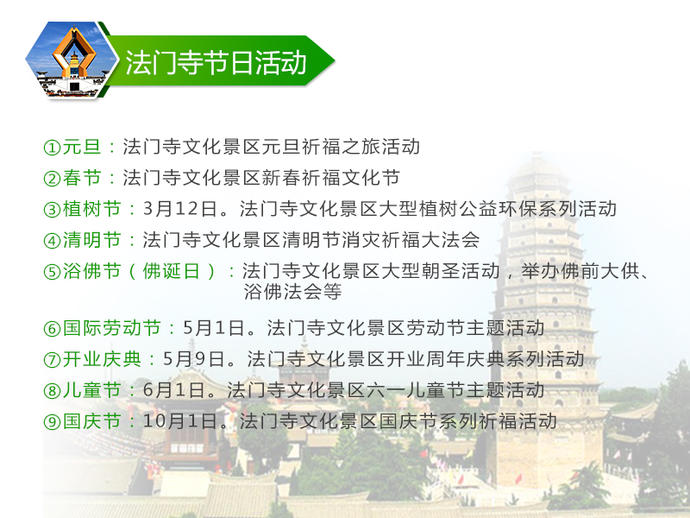 How do you go to the temple? 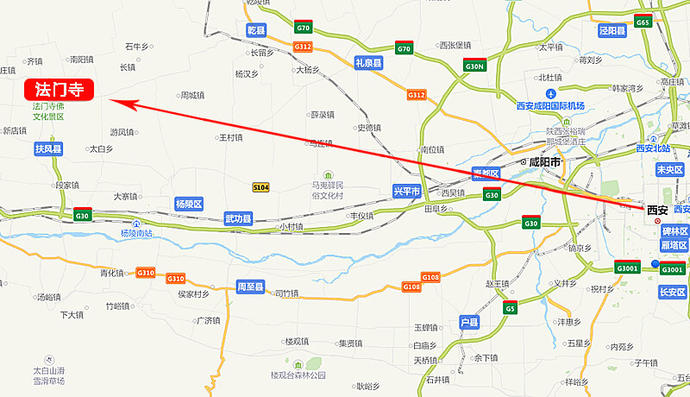 Traffic by car route: by car, then from Xi'an even Huo high-speed, and then to the law of the secondary road, turn left after the road in the right hand side that is directly into the scenic parking lot. Way high-speed tolls one-way 60 yuan, about an hour and a half can reach the Famen Temple.
Bus routes: from the Xi'an West Bus Terminal can take the shuttle to the Famen Temple, starting time for every day 9: 00,10: 00,11: 40, 4: 30,5: 00 pm. One way fare: 22 yuan. The season may be more time to queue up, about two hours by car, if you do not have much time, or suggest you choose chartered or by car, or can participate in a day trip, but also a perfect solution to traffic problems.

The first day of the first month of the first temple is the local people free of charge. As a local baby, the impression that every year when the first year of the year there will be a lot of people to Famen Temple, burned the column incense, for the next year's life blessing, it is simply crowded, lively to no, friends if you are interested, You can also take a burning incense burning lively.

Famen Temple can also play with these attractions

1. Famen Temple from the Qianling very close, if you are plenty of time, it is recommended to take out a full day, the first morning to play the temple, and then afternoon tour Qianling.
2. Han Wu's tomb is located in the downtown area of ​​Xianyang, from the Famen Temple back to the city of Xi'an on the way just to pass, if you are interested, you can also go to visit the way.

Famen Temple for the placement of Sakyamuni Buddha scaphoid relics and become a Buddhist holy place looking up, although the original temple is no longer, but the new stupa resurrection. Taking advantage of the spring, it is better to come out stroll; feel tired, it is better to look back in the past. Look at the predecessors, feel the history, shuttle in the story, enjoy the power of faith and affection. 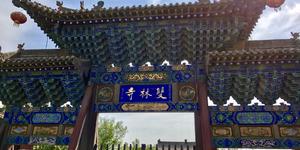 Pingyao do not look at the ancient city, only for Shuanglin Temple and Zhenguo Temple!
Load more Temple