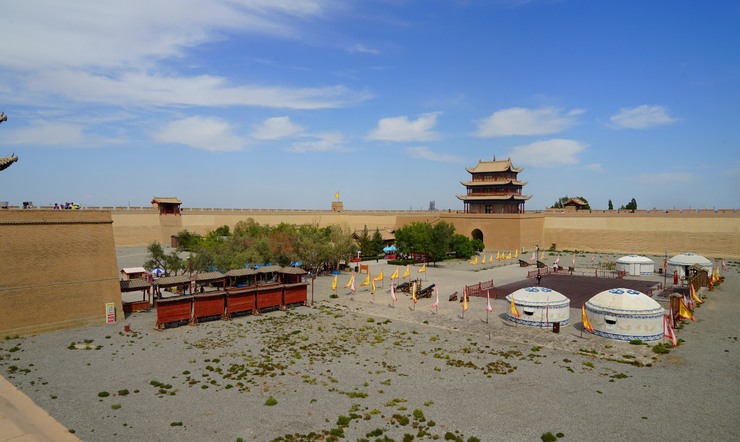 There are many passes along the Great Wall. Among them, there are two of the largest: one is Shanhaiguan at the eastern end, and the other is Jiayuguan at the western end. The latter is still better than the former, so Jiayuguan is the biggest barrier on the Great Wall and the largest scale in China.

Jiayuguan - the first in the world

Jiayuguan is located in the middle of the narrowest valley 5 kilometers west of Jiayuguan City, Gansu Province. The walls on both sides of Chengguan pass through the Gobi desert, connect the Great Wall of Heishan with the Great Wall in the north and the first pier in the south. It is the westernmost gateway of the Ming Great Wall. Historically, Once known as the Hexi throat, because of the difficult terrain, the majestic architecture, there is the world's first Xiongguan, even the title of the key.


Jiayuguan was built in Ming Hongwu for five years (1372) and consisted of Inner City, Outer City, Luocheng City, Yucheng City, Chenghuang, and the Great Wall on both north and south sides. The total length is about 60 kilometers. Great Wall Chengtai, Duntai, and Fort Castle are dotted with three defense lines: Inner City, Outer City, and City Wall. They form an overlapping and defending trend, forming a five-mile, a ten-mile, a ten-mile, a fort, and a hundred-mile defense. system. When Jiayuguan was first built, it was a 6-meter-high Tucheng with an area of ​​2,500 square meters. The existing Guancheng has a total area of ​​33,500 square meters.

What should I look for in Jiayuguan?

The inner city (above) is narrow and narrow in the west, slightly trapezoidal, with a height of 9 meters. The east and west open two gates of "Gwanghwamun Gate" and "Soft Gate." There are turbulent cities outside the gate, and the towers are symmetrical. The three-storey and three-storey building are surrounded by galleries. There are turrets in the city’s four corners and enemy buildings in the middle and south walls. 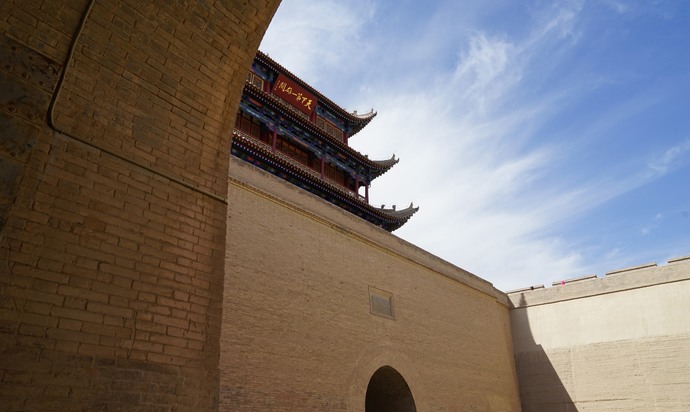 The Gwanghwamun Gate (above), the inner gate of the inner city, and the "Gwanghwamun Gate" character on the door were built. It was built in the first year of Ming Zhengde (1506). It was built by the then Shouzhou Bingbei and Vice Minister Li Duancheng. Black stones are laid in Montenegro. The gate of Gwanghwamun faces the east, which means that the rising sun is rising and the atmosphere of the earth is shining. The Gwanghwa Tower is a three-story Sanchaican-style roof structure with a height of 17 meters. It is carved and engraved in a colorful way. The first floor of the pavilion is a brick-wood structure, and the second and third floors are made of wooden structures. .
In front of our eyes, this gatehouse, which has experienced many vicissitudes but nevertheless remains the same, has survived nearly 500 years of natural disasters such as ups and downs, earthquakes, etc. However, it still stands above the city and appears before the people of the world. This can not help but reflect China. The mastery of ancient architecture and the exquisite craftsmanship...

The Rouyuan Gate, the west gate of Inner City, has carved the word “soft away” on the door, meaning that the Ming Dynasty implemented the “soft and soft” policy for the nomadic peoples of the Border Kingdom (Guanwai) to appease the remote areas in order to realize a long-term and long-term governance strategy.

Fucheng is one of the major defense facilities in the ancient city. It is built on the outside of the city gate. It has the same height and shape as the big city. Its shape is either round or square, and the circle is like a dragonfly. Therefore, it is called Fucheng, and Fang is also called Fangcheng. There is a strict layout of the Jiayuguan and East and West cities. 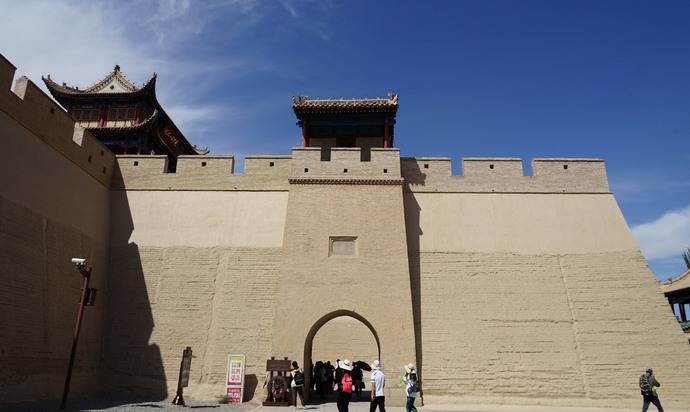 Chao Zongmen (pictured above), the name of the “Zongzong” was carved in the eyebrows of the East Gate City Gate. "Zongzong" said that although the officials of the imperial court were traveling "extremely", they must still be loyal to the court and be loyal to the king. The East Gate City is facing the South Gate and does not pass through with the Gwanghwamun Gate, making the roads of the city pass back and becoming a defense line in the inner city. 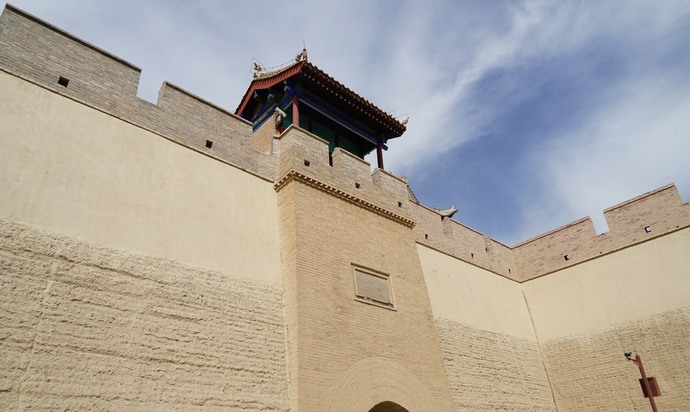 The meeting gate (above) is opposite to the East Gate City, and the entrance gate is engraved with the word "Hui Pole". “Welcome” means that the princes, officials, and business travelers who came from the Western Regions met here in a friendly and friendly manner, and from there passed together to pay tribute to the Central Plains dynasty. The city of Xiqiao is also facing southwards. It does not pass through with Inner City Gate and makes the city more solemn and deeper. 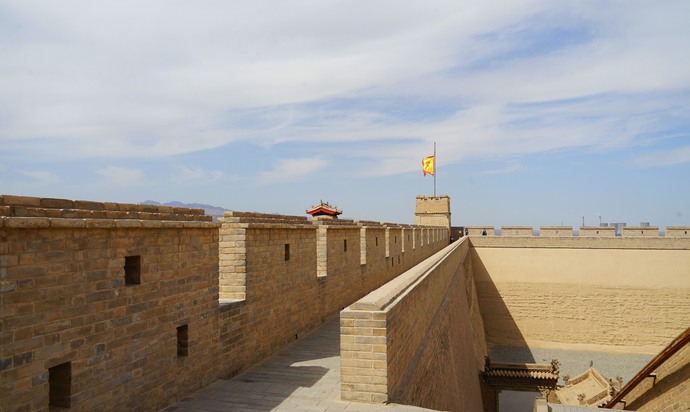 The turret (above), the corners of the inner city have turrets, also known as "miraculous building", shaped like a bunker, is guarding the city soldiers on duty whistle place. The north and the south walls have an enemy building and are places where weapons are placed. Looking back here, the three tall buildings of “Guanghua Building”, “Yuanyuan Building” and “Jiayuguan Building” are on the same central axis.
This "Cross-Town Gate" and the high-rise pavilion architectural form are the continuation of China's thousands of years of architectural history and architectural forms. 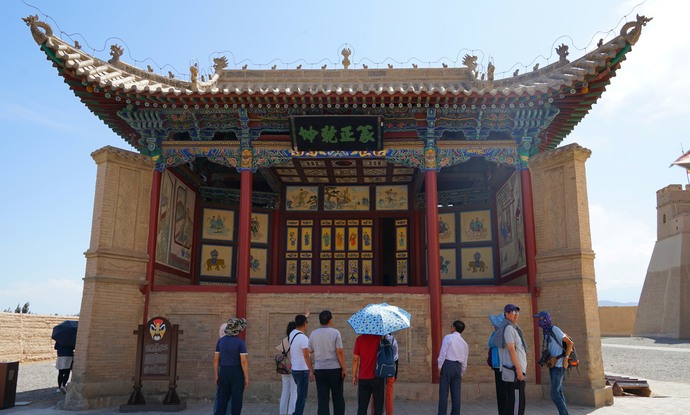 The Jiayuguan stage (above) was built during the 57th year of the Qing Emperor Qianlong (1792) by the Jiayuguan Guerrilla General Zhai Shiyi. It was a place of entertainment for officers and soldiers of the city, residents of the city, and past business trips. Its shape is a typical Chinese traditional classical stage. Separated by a wooden screen front and back, the screen is drawing eight figures in the middle of the screen, which is known as the "Eight Immortals" content.
At the top is the traditional Chinese symbol “Bagua Map” and the “Bagua Diagram” is a comprehensive reflection of the ancient Chinese ideology, culture and science. On both sides is a set of style murals, the content is the temple monks and nunnery nuns and nuns pets. These paintings are very rare on other stage.
There are couplets written on both sides of the stage: "Clubs and joys are performed in the past. The couplet highly summarizes the historical changes in human affairs and the function of opera performance venues.

Jiayuguan Guancheng is 733 meters long. There is an official well in the middle of the city and the old pavilion is now abandoned. The west gate jacket builds a convex wall, forming a city of Luocheng. This is the outer city. The outer city is 2.7 meters higher than Inner City. Outside the gate of the gate to the middle of the city is engraved with the Jiayuguan.
The original castle tower on the top of the gate is the same as the shape system on the second floor of the east and the west, and the third floor is the first line. In 1924, the tower was destroyed. In the west, there are brick buildings in Luocheng. There are earth walls in the east, south and north, connecting the Great Wall. There is a city outside the city, and Shimonoseki heavy city, into the trend.
There are Wenchang Pavilion, Guandi Temple, and opera house outside Dongsheng City, and there is a guerrilla Gumen Mansion on the north side of the city, all of which were Qing Dynasty buildings. After the founding of New China, Guancheng was repeatedly repaired and strengthened, and it has been preserved well. 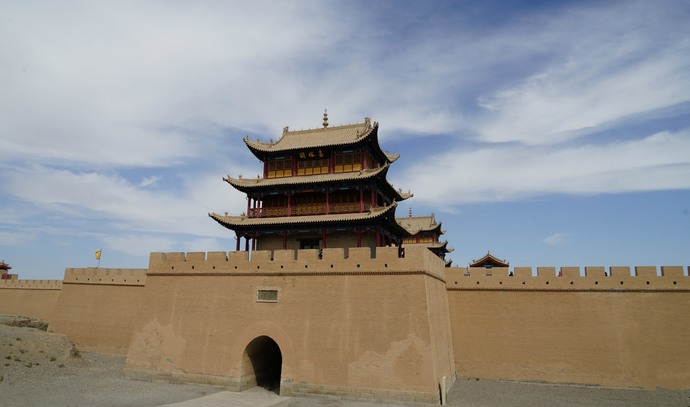 The Jiahe Gate (above), the main gate of Guancheng, also called Ximen, is engraved with the three letters “Jiayuguan” in the middle of the gate. The door leaf is a wood-wrapped iron nail with black lacquer double doors, which is 25 meters long, 4 meters wide and 6 meters high. It is paved with different sizes of stone, and the deep rut that has been left for centuries. Witnesses the historical footprints of a section of the past...
In ancient times, this gate was taken out of the city and it was truly a customs exit. In our current words, we are going abroad.

Today's Jiayuguan has no more swords and shadows than the horses in the past. It is more peaceful, strolling on the walls, feeling the sunshine of the Gobi, listening to the wind, watching the flowers...
Jiayuguan, although there is no such thing as that year. Perhaps there is still some loneliness, but its elegance, atmosphere, simplicity, and dignity still exist. It seems to be telling people the old things of that period.

Jiayuguan tickets are package tickets. The peak season (May 1st - October 31st) is 120 yuan. Apart from the Jiaheguan customs city, it also includes the Great Wall first pier and Cantilever Great Wall.
There is no shuttle between the three scenic spots and they need to be chartered. We only went to Jiayuguan and Guancheng because of the time. When we were in the Jiayuguan Pass and Guancheng, we saw a sign showing the Great Wall of the cantilever 8 kilometers away from the Jiahe Guanguan city. If you want to go all three, you have to pretend The time of day. 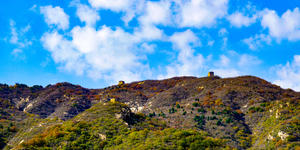 The most beautiful field in Miyun, the Great Wall 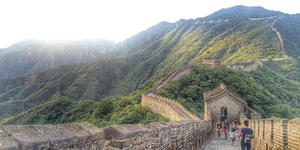 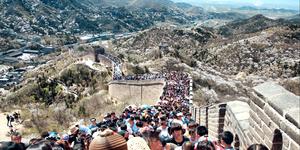 How much is the Great Wall in Beijing? Which is better? 6 Great Wall Play Raiders
READ NEXT 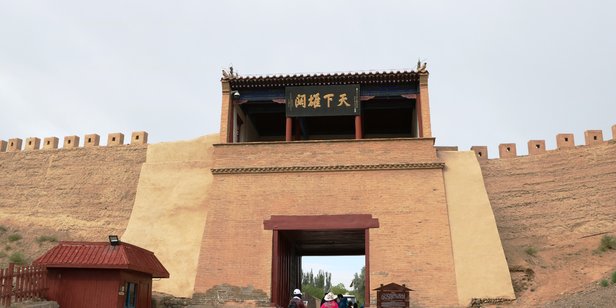 A day tour of the Jiayuguan League, 3 scenic spots to experience the Great Wall of the Northwest 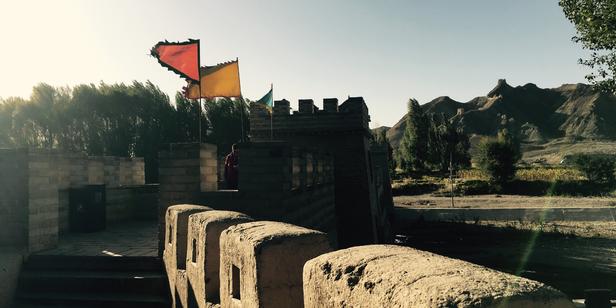