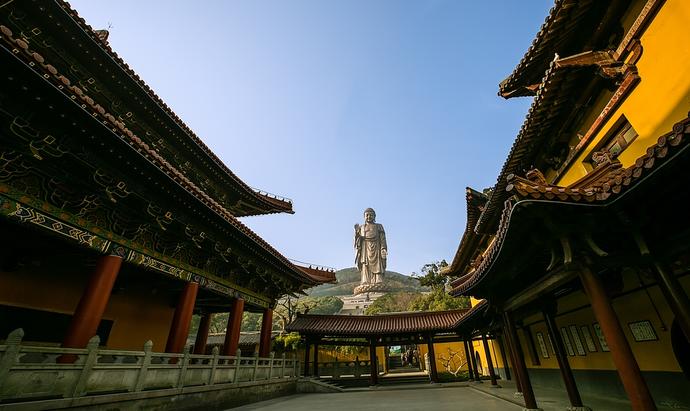 Wuxi is a place for tourism all year round, but the most beautiful is the spring of Wuxi. Especially in late March each year, Yuantouzhu's cherry blossoms are open to the mountains, comparable to the "second speed 5cm" cherry rain, beautiful to the unforgettable.

Lingshan Shengjing, located on the coast of Taihu Lake, is currently the most complete and the only Buddhist cultural theme park focusing on the achievements of Sakyamuni. The scenic spot mainly includes the bronze statues of Buddha at Mount Shaolin, Temple ", a large dynamic music group sculpture" Kowloon irrigation "and the World Buddhist Forum site" Lingshan Vatican Palace ", has been incense heyday. One of the most famous of these is the Lingshan Buddha, considered by many as a "business card" in Wuxi.

Lingshan Buddha is the highest open-air bronze Buddha statue in the world. It is said that touching the bergamot brings happiness and hugging Buddhism can hold the peace. Here you can temporarily put aside the mortal things and let the soul be baptized and purified. 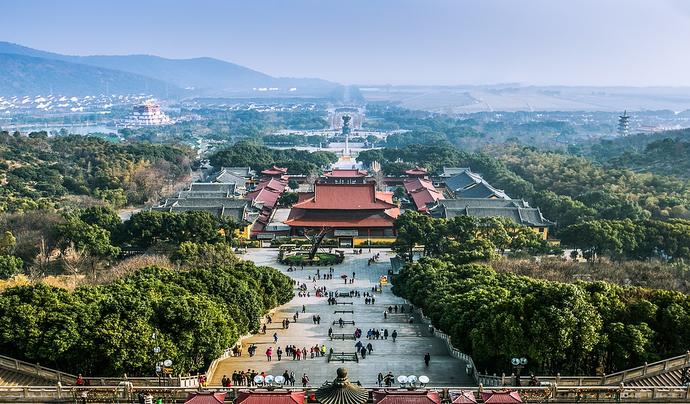 2. Nanchan Temple: "one of the four hundred and eighty Temple" 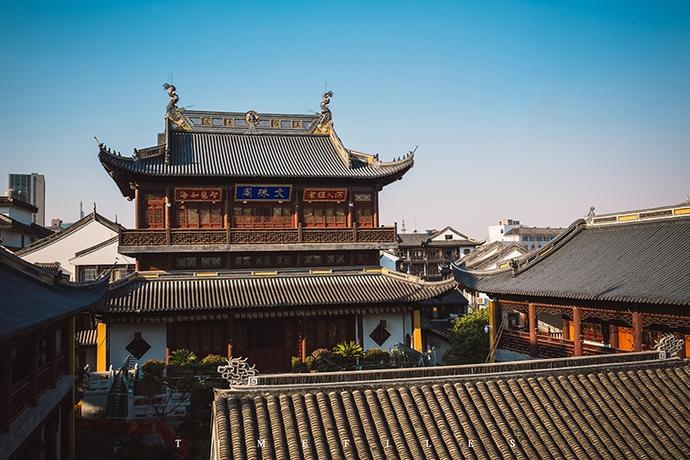 Nanzenji by @ all Ni good

"Four hundred and eighty temples in the Southern Dynasties, how many towers in the misty rain", located in the Wuxi Canal Nanchan Temple, is currently one of the few only one of the four hundred and eighty Temple. Temple incense heyday, every first, fifteen, pilgrims in an endless stream. Night temples fade noise during the day, the lights dim more lonely. In addition, it is also possible to cruise the canal at Nanzenji Pier. 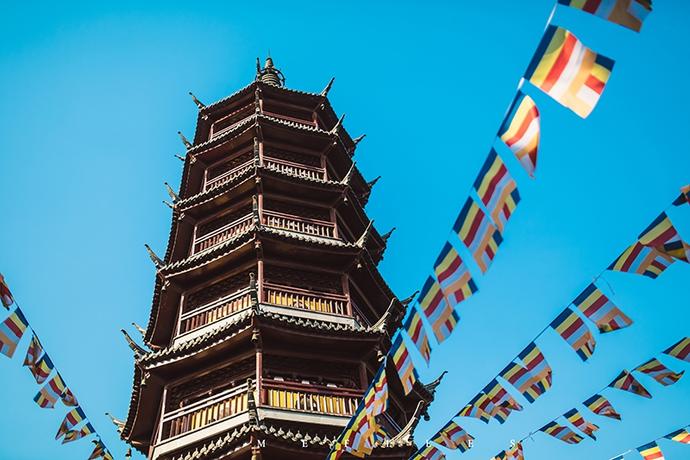 Nanzenji by @ all Ni good 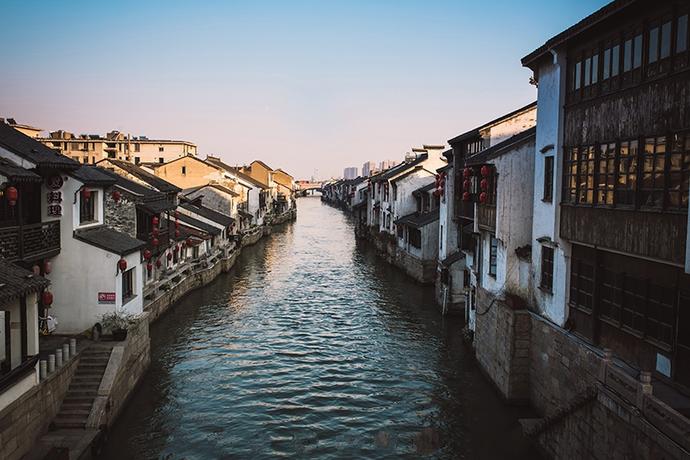 Beijing-Hangzhou Grand Canal and the Great Wall par with the Chinese wonders, has been more than 2,500 years of history. Traversed in the ancient canal in Wuxi City to Wuqiao Nishui pier, south gate to Qingmingqiao this section is the most Jiangnan Water Village style, known as "Jiangnan water alley, out of print." Whether it is day or evening, the ancient Grand Canal is a picture of Jiangnan ink painting, tour of which you will feel time flies, years of quiet. Especially in the evening, the reflection of the red lantern shatters in the paddle, as if dreaming of the ancient Jiangnan overnight. 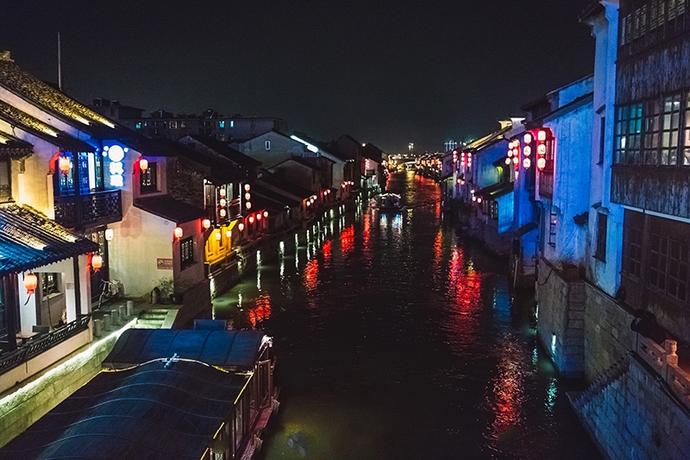 
South long street: the most ancient street in the south 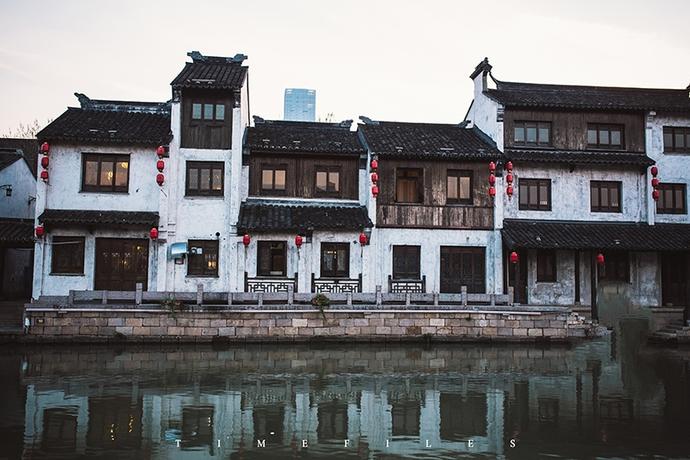 Nanchang by @ all Ni good

Under the boat, out of the old town of Wuxi, South Bridge to go through a mile south of the bridge, to the modern South Street is known. Here is the origin of Wuxi City, with the taste of the ancient town, but exudes the atmosphere of literature and art. Whether it is waterfront houses, or specialty shops, all kinds of Western restaurants, blurred bars, there is a unique taste of southern China. 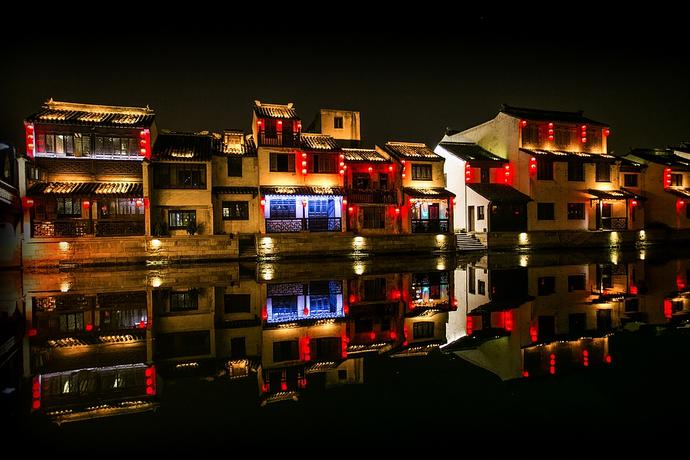 Nanchang by @ all Ni good 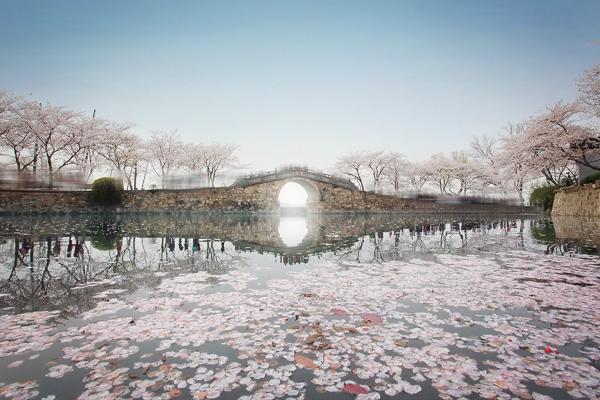 Yuantouzhu by @ call me a small Miao

To Wuxi will visit Taihu Lake, Tai Lake must visit Yuantouzhu. If you can only choose one place to experience the most beautiful and cultural heritage of the southern city, it must have been the first scene of Taihu Lake - Yuantouzhu example. Here is an overview of the best combination of landscapes in Taihu Lake, was a private garden. In addition, here is the best spring cherry viewing and the most beautiful autumn place. 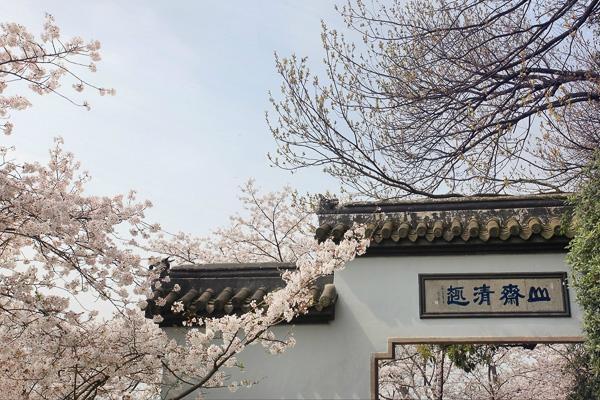 Yuantouzhu by @ call me a small Miao 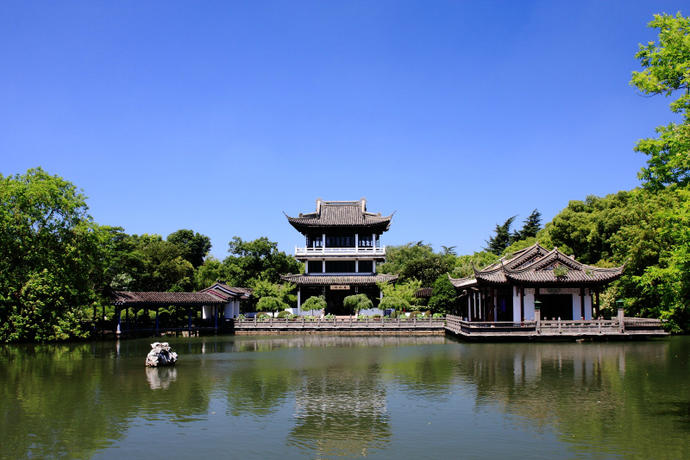 Liyuan Park, and Suzhou Humble Administrator's Garden, Baojia Garden and known as the "Three Southern Famous Private Garden", Wuxi is the garden with the most characteristics of the garden. Legend has it that when the Spring and Autumn Vietnam Dr. Fan Jixi beauty Shih Tui boat here, named after the lake because of the lake, named after the lake. Li Park, known for its water features, thousands of steps promenade, water pavilions, picturesque scenery. 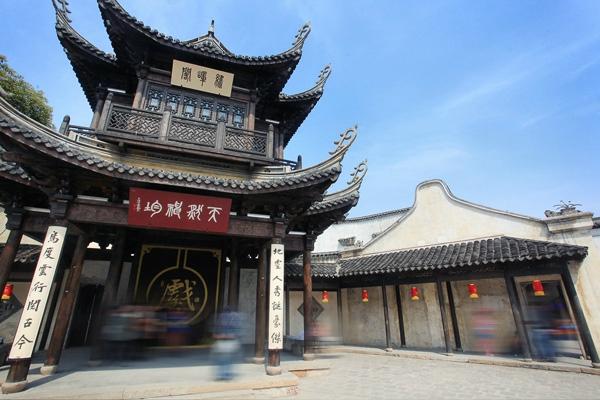 Huishan town by @ call me a small Miao

Huishan Ancient Town is located in the four famous gardens in southern Jiangsu, Chang Park, next to the world the second spring, due to Lin Hui Quan foothill named after, with beautiful scenery, a long history, many are well-known artifacts, is the unique style of old streets in Wuxi preserved Block. Among them, the ancestral temple culture is most prestigious. The number of its ancestral temples is as large as its density and its type. It is a microcosm of the surname and celebrity biography. It has the reputation of "open-air museum" and "cultural treasure house." 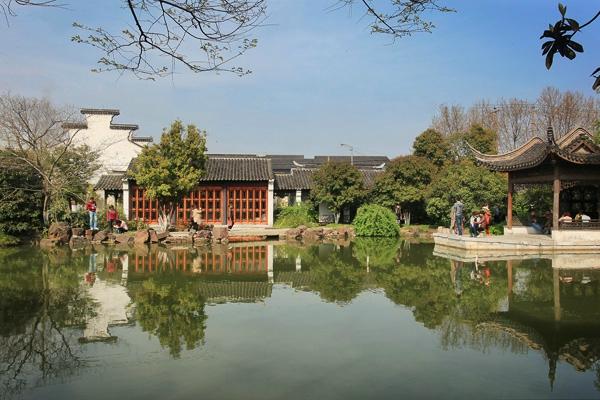 Huishan town by @ call me a small Miao 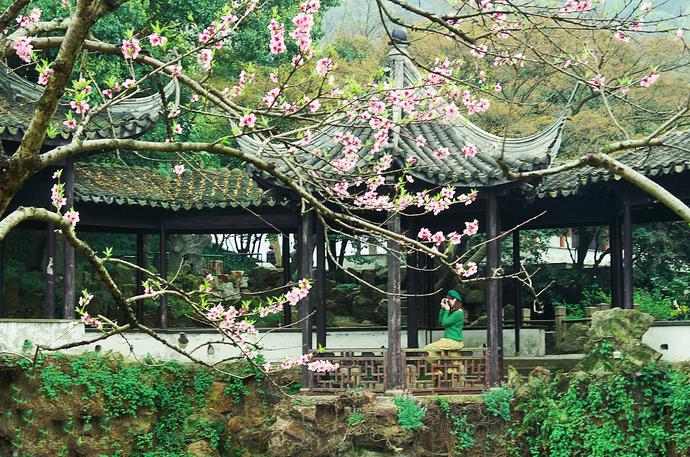 It is located in Hui Park, Xi Hui Park Jie Park, and Nanjing's Zhan Park, Suzhou's Lingering Garden and Humble Administrator's Garden and become "the four famous gardens." Qianlong six south, tour to Wuxi must swim Chang Park, and even built a Summer Palace and its same fun park. From an open field of small garden to crown the world famous Jiangnan Park, Park Chang Park natural also many literati are closely related. The whole garden layout to pool as the center, clever because of borrowing, mixed with nature. Roaming them, as returned to the old Jiangnan, such as a roll of ink paintings, lifelike. 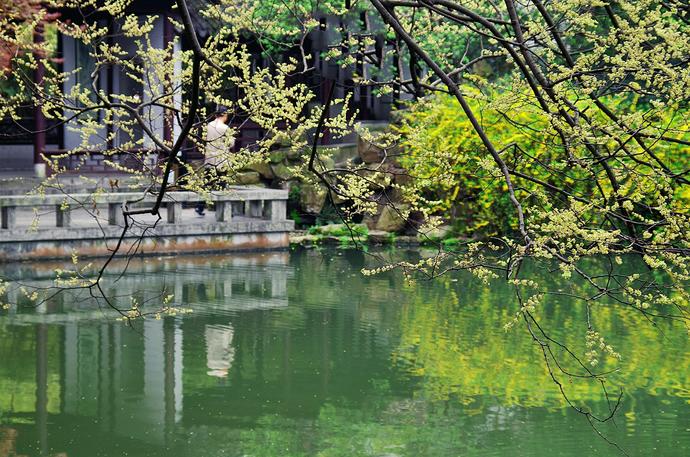 
"Everyone to make Jiangnan well, only tourists Jiangnanlao." Eat a small bowl with a bowl of wonton, quietly walking in the streets of Wuxi, watching the river flowing, to see the apricot flowers, quietly feeling the only part of the slow pace of Jiangnan. 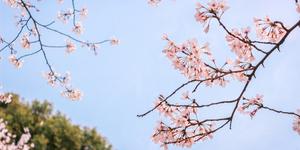 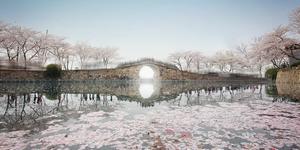 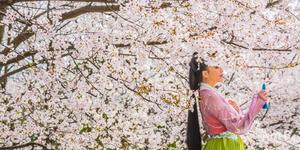 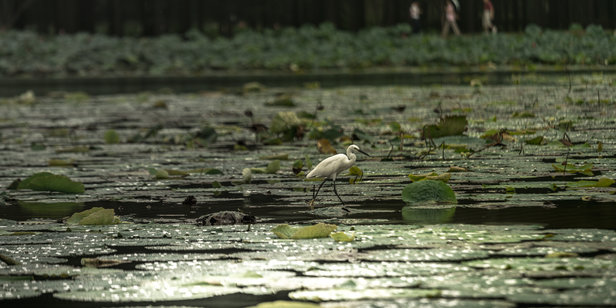 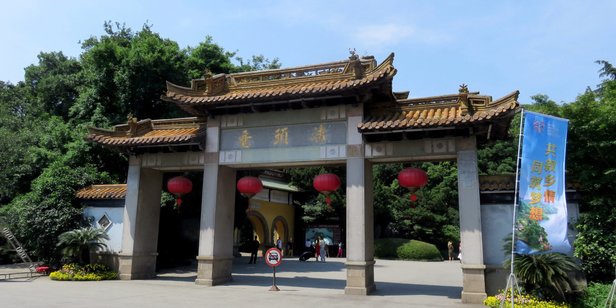