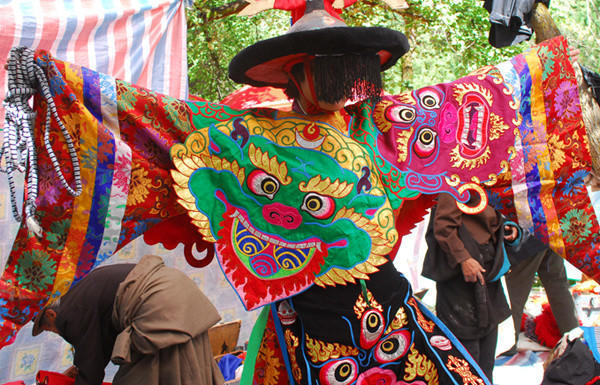 figure tibetan opera performance by under the bottom of the pass 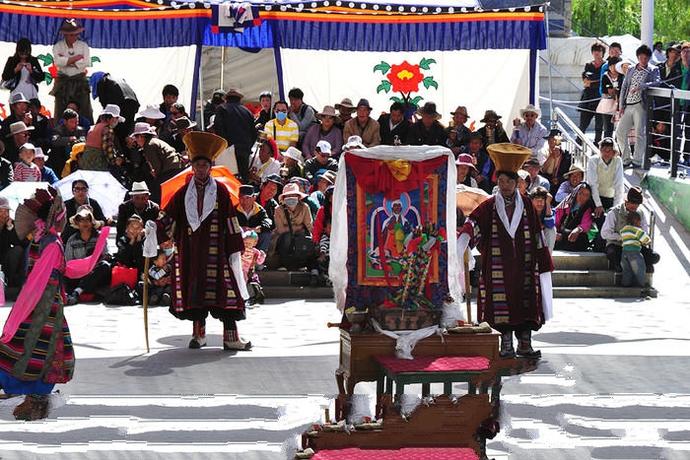 What is the festival?

Shoton means "yogurt feast", as the name suggests, is to eat yogurt's holiday. According to the provisions of the Tibetan Buddhism Gelug Sect, the annual spring and summer of the three months, the plateau vegetation initiation, insect bird hatching, a little carelessness will cause the death of a small life, especially the annual Tibetan calendar June 15 to 30 For the ban, the size of the monks of the monks are not allowed to go out until June 30 after the lifting of the ban before the mountain. Lama down the mountain, farmers and herdsmen come up with yogurt, near the Tibetan opera team also to show them, Lhasa city a jubilant, this is the "Shoton Festival" origin. 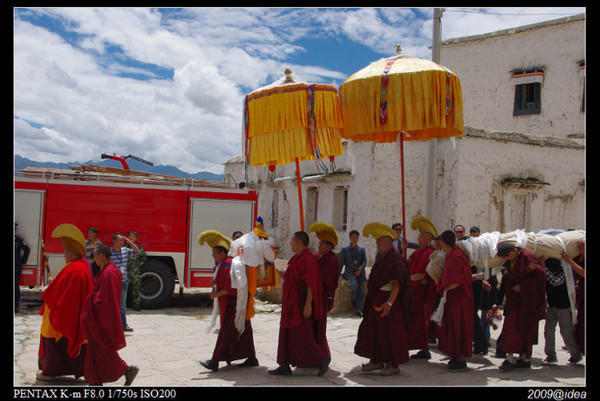 "Shoton Festival" how too?

Han people over the Spring Festival, in the eyes of foreigners, lively is to do New Year's Eve, posted couplets, visiting the temple, dance lions ... ... If we use the same curious eyes to see the Tibetan people, Can not miss it?

The most lively - to Drepung Monastery to see the sun Buddha 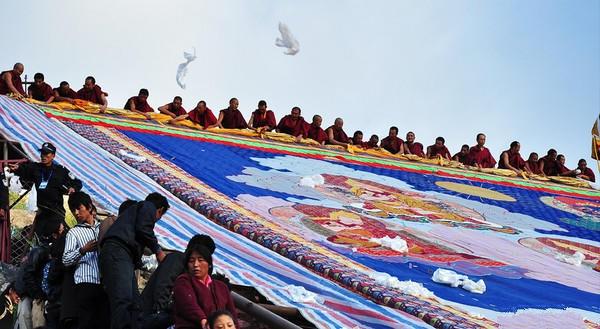 About 8 o'clock when the ceremony is about to start the Buddha. The first is the magic of the various laws of the play, and then recite the Buddhist scriptures, and then the monks will be the Buddha's debut from the inside of the temple carried out in the temple stationed Living Buddha and the Lama's support, Datang Buddha Buddha from the temple was Please come out. At this time the Tibetans rushed to use their own head to touch the Buddha, touch the living Buddha, and fight to help the monks to bring the Thangka. And the lamas are hard to carry the heavy side of the Thangka road, again drove the crowd. 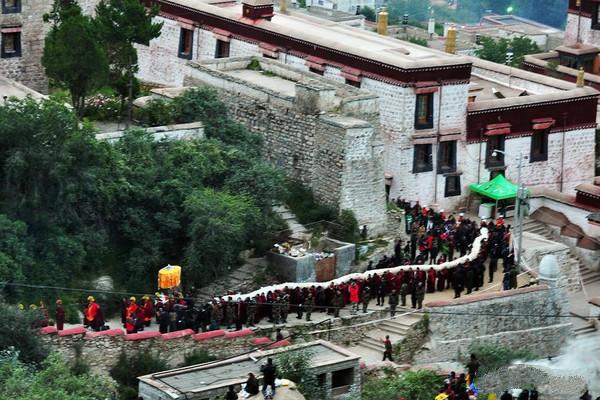 Figure: Lama who carries the Thangka. BY day

Thangka traveled to the platform, in some simple rituals were monks slowly pulled up, in the Living Buddha soon as the Buddha, Huang Man started, solemn and solemn of the Buddha in the scene of people in the sight of people 10,000 believers and infected tourists, all hands together, pay homage to worship. Buddha will be displayed in the sun one day, to about 5 pm to recover. 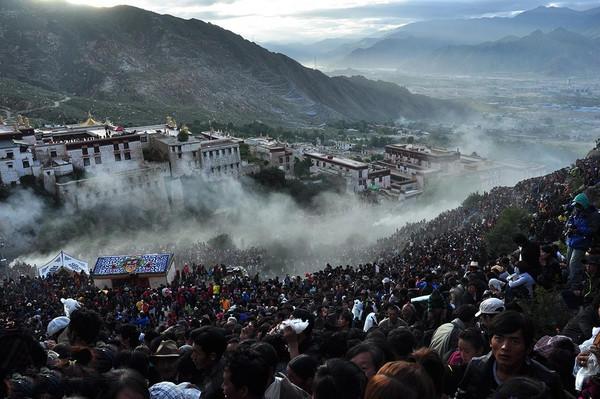 Figure: Pilgrimage to the Drepung Monastery. BY day

Tips:
show Buddha only in the morning of August 21, the sun rose, the event will start, so in order to see the Buddha, must be early in the morning. To find a good seat is very important, or will only see the people everywhere. To occupy a favorable position, it is necessary to arrive in advance, the Buddha will be one or two o'clock in the morning, the best one afternoon in advance to bring tents living next to the sun Buddha. 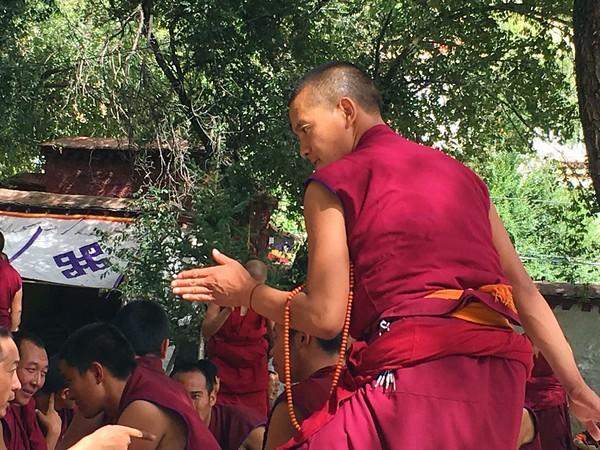 Figure: Mara Monastery. BY side to shoot

Shakespeare's protagonist: yak yogurt, strong taste, sweet and sour taste, pure and fragrance of milk flavor, like the pure blue sky in Tibet dotted with white clouds, savor a taste, the resulting realm of ordinary yogurt can not go beyond The 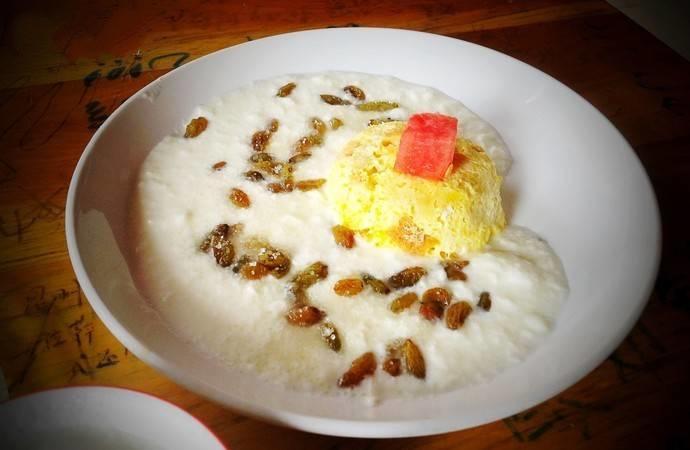 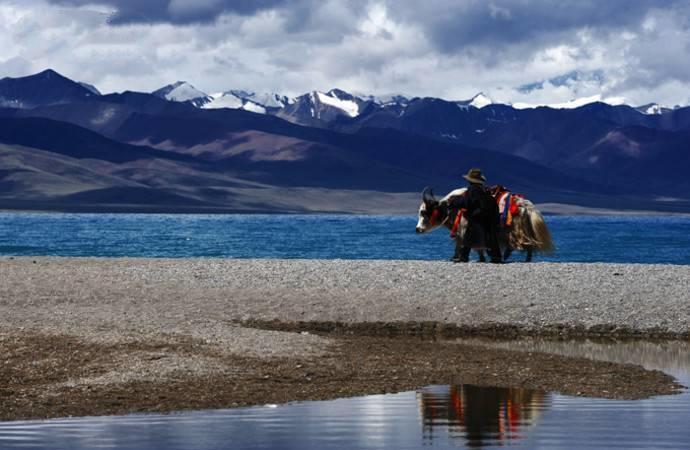 Namco wrong unpredictable, relying on the temperature, wind, rain or sunshine, easily turned out only belong to her in different poses and attitudes. How to appreciate her The way the locals are to turn the lake, because the lake is too large, the lake terrain complex, the strongest Tibetan guy to turn around also have to run 10 days. Every year during the festival, the locals will organize the Namibu wrong lake assembly, with walking the way close to the holy lake, pray for happiness.
↓ ↓ ↓ Na Mu wrong 1 day tour channel ↓ ↓ ↓

The most joy - over the forest card, see Tibetan opera 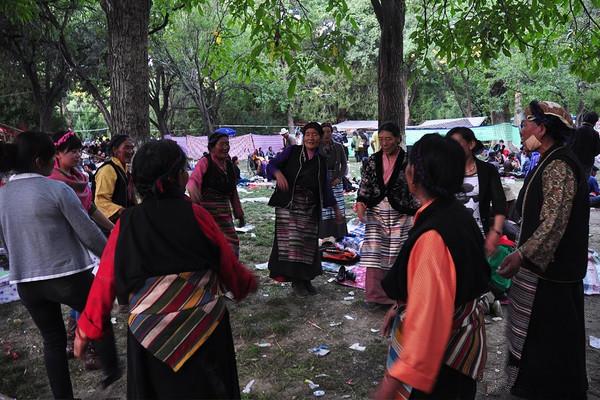 Every year during the Shoton Festival, is the Dalai Lama's summer official "Norbulingka" the most lively day, the Tibetan free open five days, said God Wang, the people with fun, the opportunity is very rare. We are dressed in holiday clothing, wearing some of the jewelry, with a variety of yogurt and eat and drink, put up a tent here for 7 days.
Norbulingka's Tibetan opera show is the highlight of the Shoton Festival, and every year from the Lhasa, Shannan, Shigatse and other places of the Tibetan folk troupe gathered in the Norbulingka stage, participating in the number of more than 200 people.
In addition, at the foot of the Potala Palace Dragon King Lake Park , the Tibetan team every day without stopping from 11 am straight to the twilight fall. 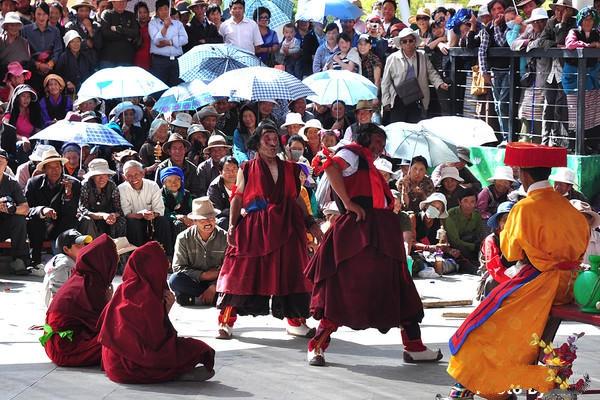 Read the above "Shoton Festival will experience", there is no lost heart it? Then the problem came, to be a qualified tourists, it is necessary to feel the festive atmosphere, but also to complete the attractions punch card, how to spend a day in the Savannah Day? 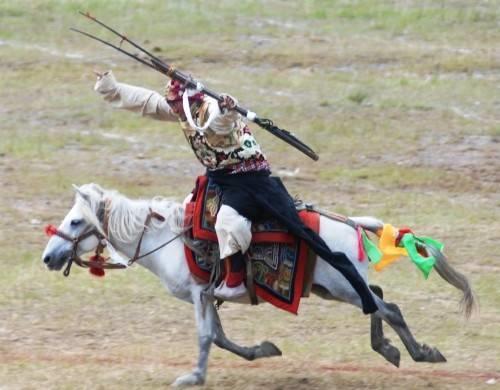 Figure: horse racing performance. BY back to Lhasa 2008

Fun Shoton running account ↓↓↓ ↓↓↓
day, starting at noon, long sleep before snow Dayton;
01:00  departure to Drepung see the sun Buddha, the sooner the more easy to occupy a favorable position, after 3:00 to only see the sea of people
09:00  to Norbulingka get together, join in the fun, watch Tibetan opera (tickets 60 yuan / Zhang)
12:00 Yangzhuoyongcuo half-day (if you do not so far away, you can go in the afternoon racetrack , see Immediately archery, immediately pick up Hada game)
19:00  back to Lhasa to collect yogurt food the
next morning, you can also see the salad temple famous Karma Ha shaman dance group God dance .
↓ ↓ ↓ Yang Lake half day tour channel ↓ ↓ ↓ 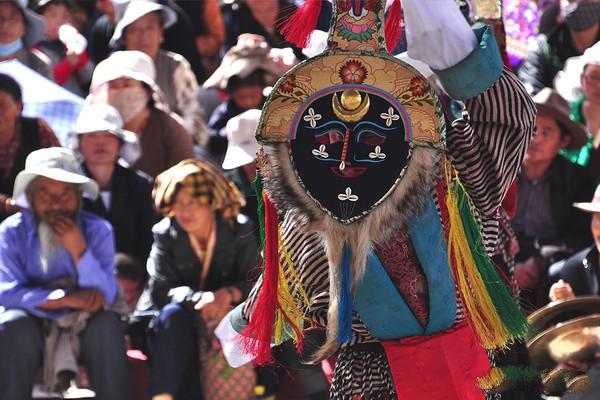 Eat yogurt is one of the Tibetan people's long-standing living customs, it is the Dayton Day Festival essential diet, in recent years the improvement of the local Han people yak yogurt add a lot of traditional, we come to recommend the most worthy of Lhasa Authentic yogurt food. 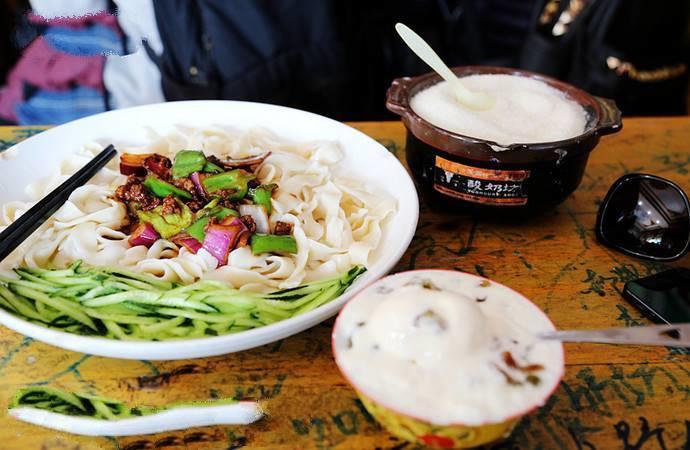 Jokhang Temple near the popular yogurt shop, the place is clockwise to the outskirts of the Jokhang Temple octagonal street, after the Maggie Ami yellow house not far, go to a tree, you can see this shop, a big Of the black 氆 氇 written "old tree yogurt", which 6 small table, arranged very Tibetan characteristics, yak skull, Tibetan ornaments, the wall is the signature of visitors around the memorial.
Address: Tibet Autonomous Region Lhasa City Chengguan District Bazhou South Street on the 28th under the old trees 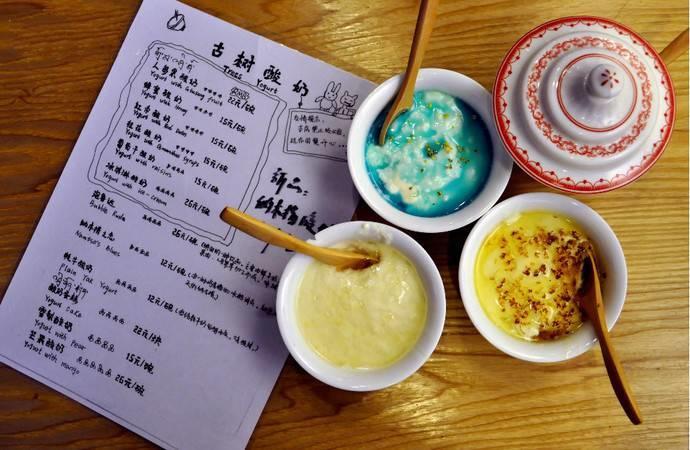 Potala Palace Simon's fashion yogurt shop. Yogurt rich in taste, like honey yogurt and rose yogurt, etc., with special equipment dress. Away from the drug Wang Shan close, every one to the road. "Yanghu half-day tour," the collection site in the yogurt Square opposite, you can add strength before starting.
Address: No. 41, Beijing Road, Chengguan District, Lhasa, Tibet Autonomous Region (west side of the Potala Palace) 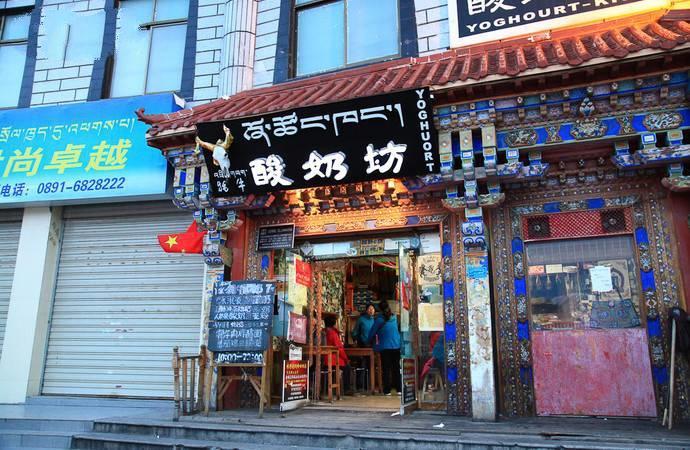 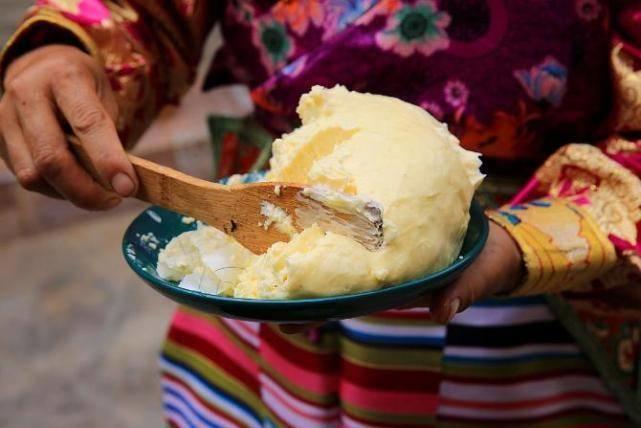 Small stall is very famous, but also on CCTV. Location is very easy to find, in the Lhasa Post Office across the road, Lhasa Department Store door can see you. But eat or eat or to see the luck, the proposed morning or noon to go, sometimes go late there is no. It is said that this yogurt is made by the cattle of the Tibetan people's own cattle, especially fresh and natural.
Address: Duo Seng Ge Road and Beijing East Road intersection, 100 Yi supermarket entrance 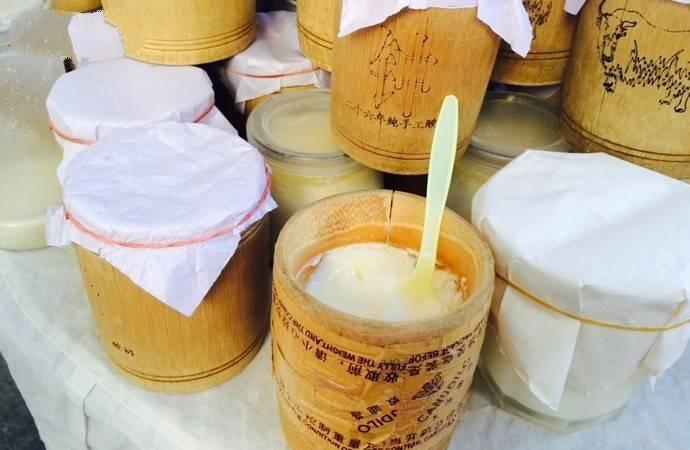 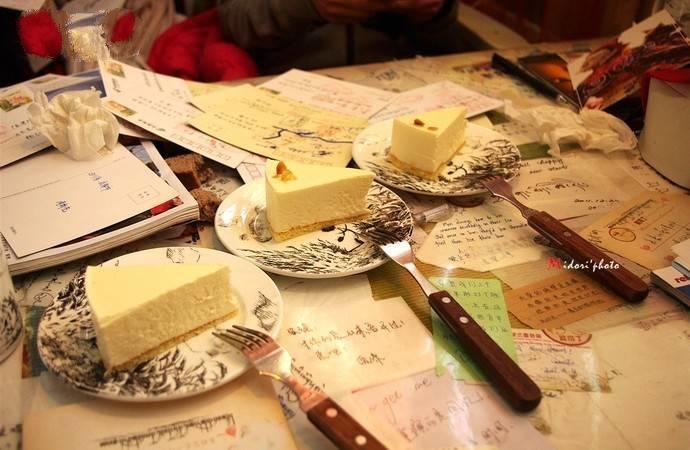 Above the three are dominated yogurt, but this is a grand introduction to the snow Dayton yogurt package . Every year the Shoton Festival, his family will launch yogurt package, personally think that is the local ingredients (barley, yak meat) and the best combination of foreign cooking a shop, but also to Lhasa had to go to a place. Yogurt cheese cake, yogurt puff and a series of yogurt products, both milk and yogurt refreshing, after eating teeth cheeky fragrance. The boss is married to Tibet, Guizhou folk singer, lucky, you can also enjoy the food while enjoying the boss self-sing the original song. This is where the young artists will go.
Address: 3 / F, Dangjie Lin Road (near Jokhang Temple) 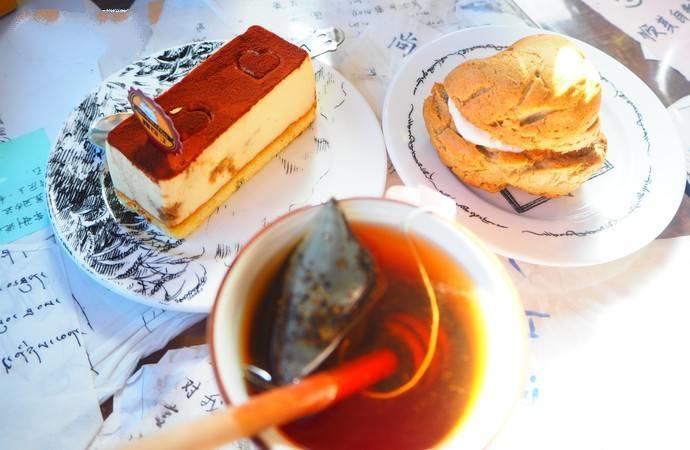 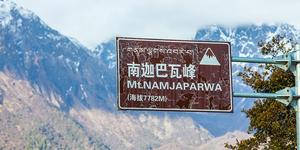 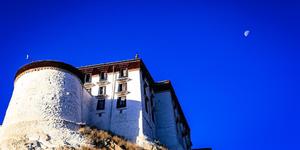 Travel to Tibet, you are most concerned about the problem here 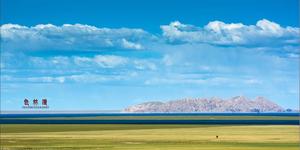