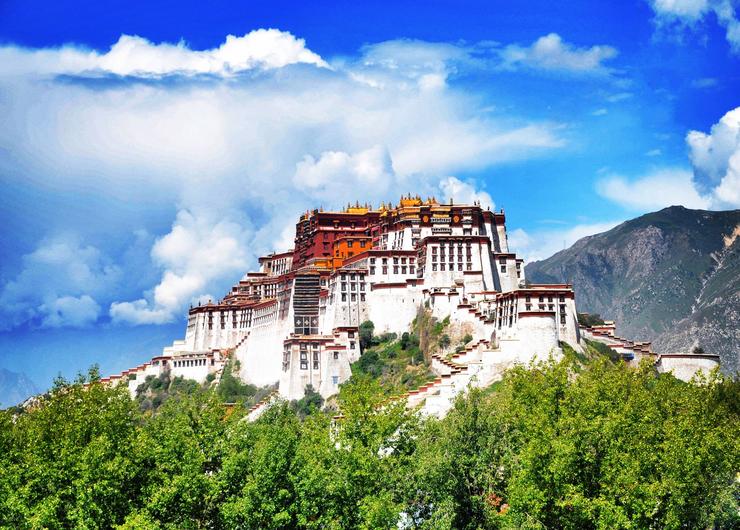 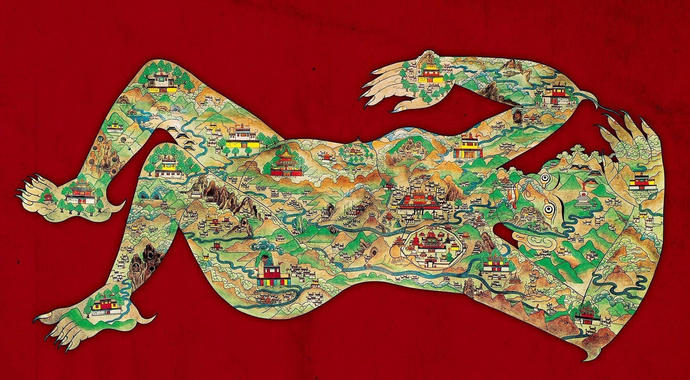 Figure: Witch supine figure. BY images from the web

The legend of Tibetan wilderness is the shape of the witch, which goes back to the time when Princess Wencheng entered Tibet in the 7th century. According to legend, the princess Wencheng predicts that the Tibetan terrain is like the supine shape of the Lohash Kalachakra according to the Central Plains' Eighty Five Elements Counting Observations If you want to stop the women of Raksha, you need to build thirteen temples. As a result, there will be built in the heart of the witch Jokhang Temple and the possession of four Ru to town witch limbs of the town of magic twelve temples. "Witch supine map" reflects the history of Tibet people pray for heaven, earth, people and cultural concepts of harmony.

The Holy City of Lhasa, the Potala Palace as the center, radiates out of the three circular turn Road, shaped like a mandala, every day of the year every day of the year, countless believers use the body as a ruler, measuring the land, from all directions Come, just to come to holy city pilgrimage. Although some people come for the first time, they still think of themselves as "returning to Lhasa."


Central Lhasa is the most densely populated temple in Tibetan areas. Tibetan life and religion are closely related. Therefore, to understand Tibetan culture, we must first start from Lhasa City and the surrounding temples. Here we come to a brief introduction to the temple in Central Lhasa. 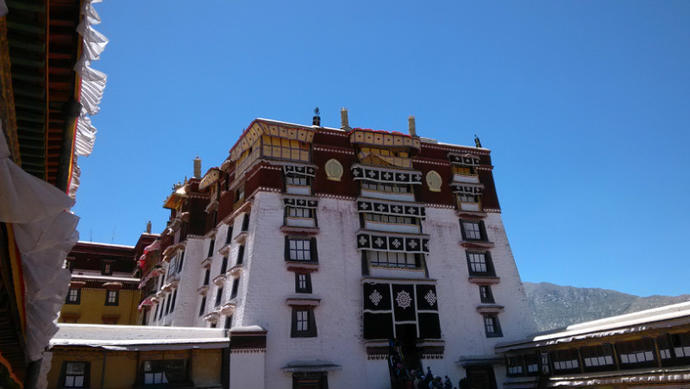 The Potala Palace is at the heart of Lhasa and the tallest building in the Old City of Lhasa. The Potala Palace, built during the Tubo Dynasty Songtsan Gambo in the 7th century, houses the culmination of Tibetan cultural buildings, paintings, religions and artifacts and witnessed the historical changes of Tibet for hundreds of years. A word of incomparable Potala Palace incomparable, still in the discharge of their duties, those appear later than the palace, and now has been frozen in the photo memory, the Potala Palace, it is still a living palace . 2.2 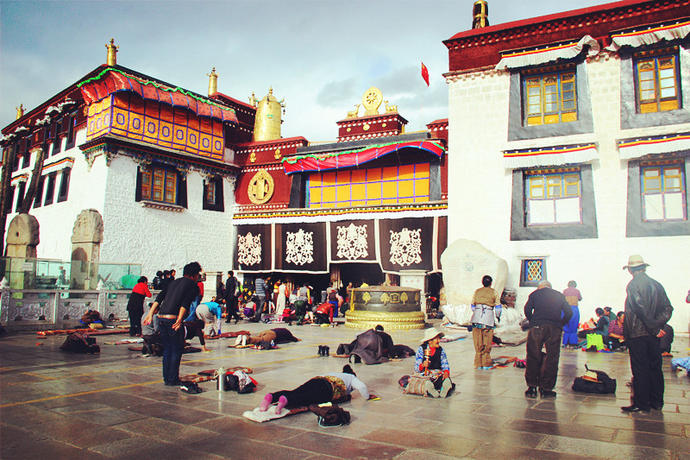 Tibetan Buddhism is the most sacred place, not far from the Potala Palace. At that time, the second wife Wang Zhaosun, the then Tibetan king of Songtsan, presided over the construction of over 1,300 years of history. The main hall dedicated to Shakyamuni 12-year-old body like. The reason why Lhasa has the reputation of "Holy Land" is related to this Buddha image. Jokhang Temple in Tibetan Buddhism has the supremacy. Jokhang Temple is Tibet's most brilliant Tibetan period architecture, is also Tibet's earliest civil construction, and created a Tibetan-style temple city bureau rules. Jokhang Temple Jinding, a direct access to the stairs on the second floor and the third floor of the platform, overlooking the magnificent Potala Palace, overlooking the Jokhang Temple Square can also flow and full of Tibetan breathtaking Barkhor Street. 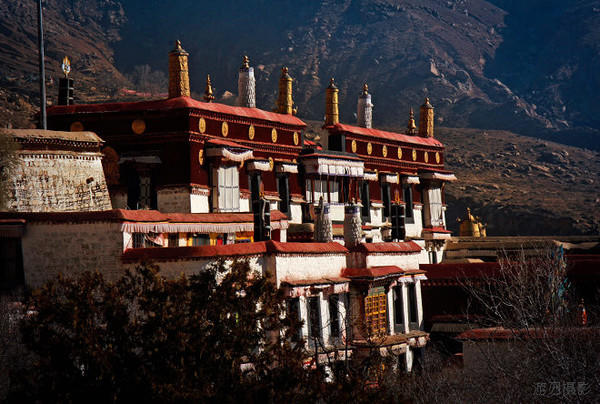 The largest Tibetan Buddhism Gelugpa Monastery, known as the birthplace of the monk Buddha, it is the world's largest Buddhist temple, one of the six main Gelug Sect, and Gandhi, Sera collectively known as Lhasa Temple . The main Holy Grail is King Kong Diamond King. The annual Sun Day Buddha activity is spectacular. On June 30, the monks of Drepung Monastery hung a 30-meter-high, Ten meters of giant Sakyamuni like for people to pay their respects. 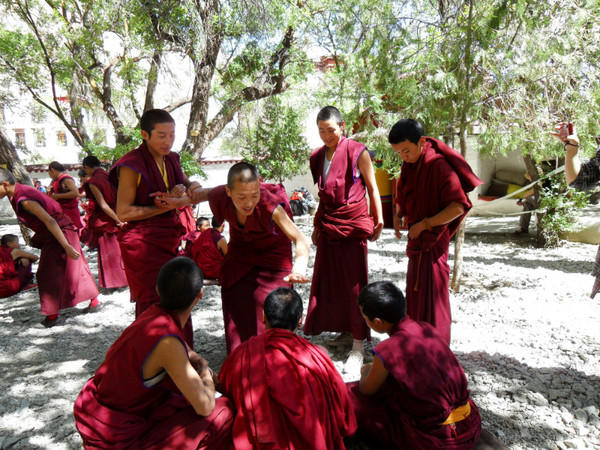 Figure: Sera Temple debate. BY Travel is my Valentine

Lhasa, built in the last three temples, Ma Tau tomorrow is the main temple of the temple, the temple holds tens of thousands of Buddha statues. Sela Temple has a wonderful sound Hall, Giza warehouse, Mazza warehouse, Ababa warehouse and 32 Kang Village. The building is not crowded, mixed and not chaos, according to local conditions, the main prominent, reflects the unique style of Gelugpai Temple, is entirely a religious city. Except for Sunday afternoon every Sunday outside the debate activities, the temple has many beautiful mountain cliffs. 5. 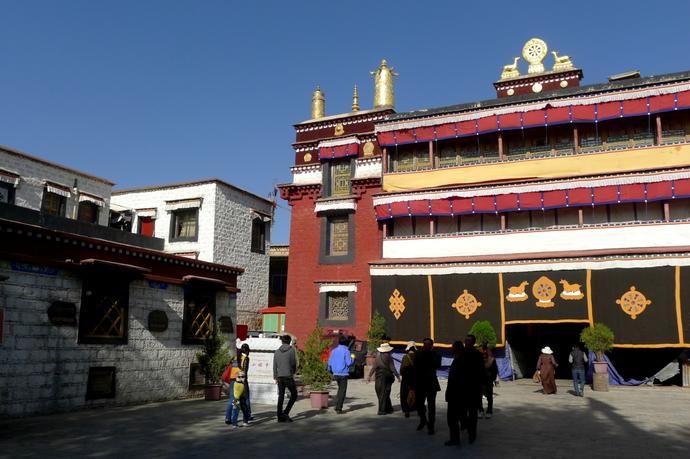 After the war and fire were damaged and rebuilt, most of the existing buildings of the Xiaozhao Temple were later rebuilt. Only the lower shrine is an early building. The 10 pillars in the temple can be seen vaguely in Tibet. The main hall dedicated to Shakamuni 8-year-old body, Ramo or Tibetan Buddhism Gelug sect palazzo one of the Supreme Court. 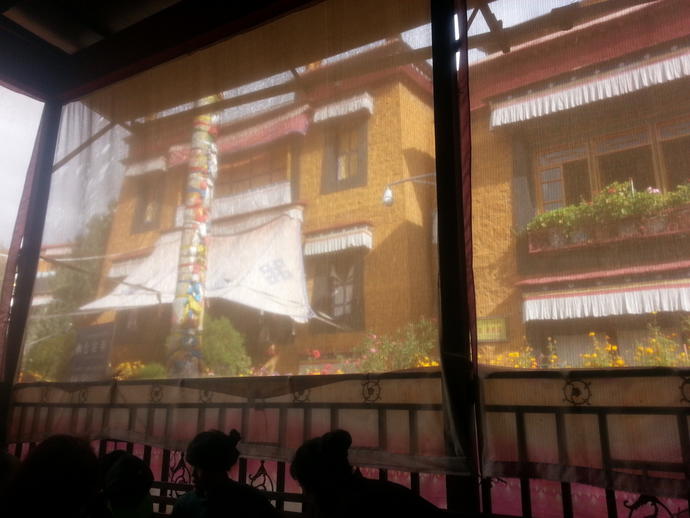 Lhasa city's largest nunnery temple, the temple is best known as a layer of ground floor of the main Buddha Songtsan Gopuram cave, the cave is dedicated to Tubo King Songtsan Ganbu statue every day, three full-time nun here, chanting prayer on time , Place the product, or replace the lamp. There is a sweet teahouse in the yard, a warehouse-cum-store, a warehouse-cum-teahouse and a warehouse-cum-clinic. Need to enter the hall before admission ticket. 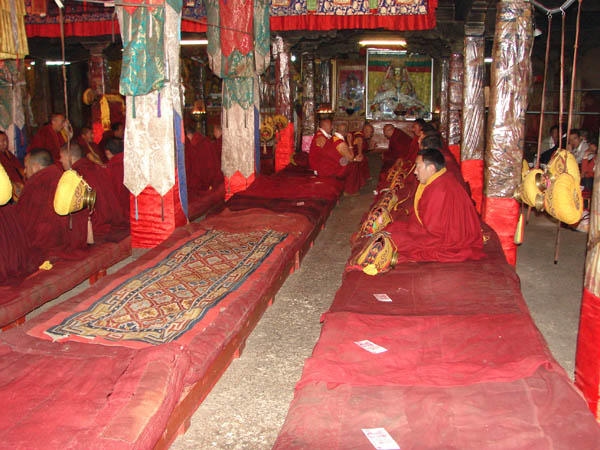 Gelug sect one of the highest institutions of higher education, is the lower part of the Hong pass the law. The main buildings of the Lower House include the Temple, Temple, debate by the field, India by the room. Among them, no matter the building scale and the artistic value, the main hall is the most. Not many monks, the temple has two jealous lucky like. The same is true for the lower house and the upper house, as long as the duration of study is not fixed, you can withdraw from school at any time, you can also practice life here. Some of the monks with formal qualifications may be promoted to positions of detention in Zhakang on the basis of their qualifications and then to be promoted to Gegui (Iron Rod Monk) or Khenpo (Hosted by the Abbot of Han Temples) and may even be replaced in the future Dalai in charge of local government in Tibet. This is very attractive to the monks. 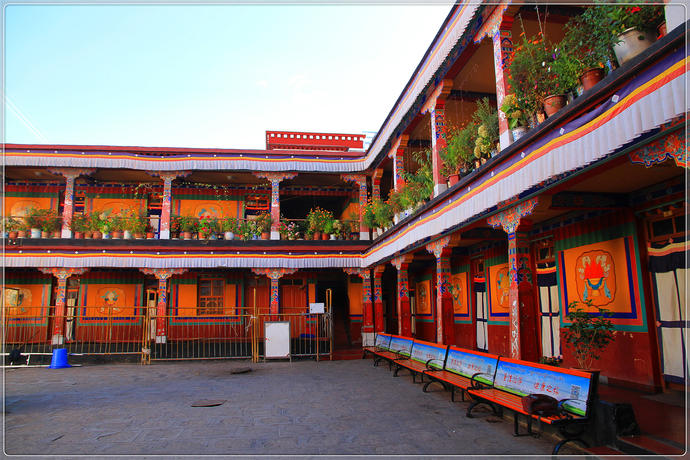 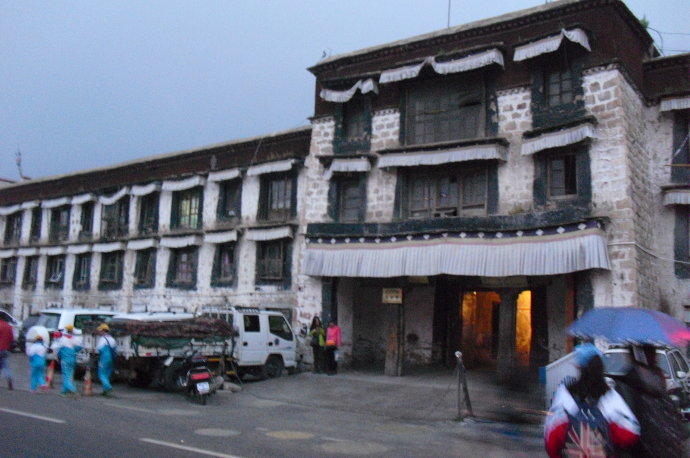 An old castle-style compound, the middle of the compound is the Buddhist Association of Tibet. Not allowed to visit but can be seen from the window printing operation. The paper used in the printed scriptures is made from the roots of a herb called Stellera chamaejasme. This plant made of paper, thick thick, soft and not easy to wrinkle, but also has anti-moth-eaten, rat bites, possession of not bad for a long time.With ink, the classic scriptures are all printed with cinnabar, the rest of the selection of fine Smoke ink or birch bark smoke smoked, to improve ink quality, also incorporation of viscous herbs bergamot, rosin and so on. Due to the development of modern technology, Tibetan printing and computer software prevailed in the printing industry. However, Mu Ru Si Printing House still adheres to the ancient tradition of maintaining manual operation. The new wood temple is very small, in the printing house on the left, the main Avalokitesvara, there are several cover the face of the law enforcement god. 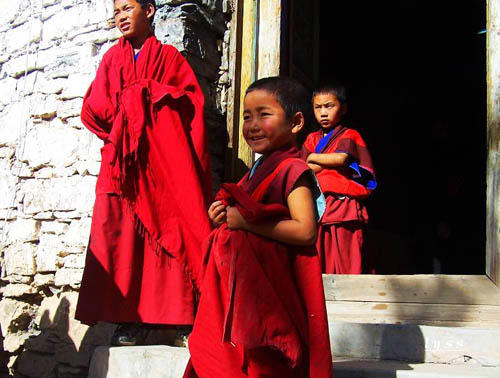 Formerly large-scale, almost a hundred years ago destroyed, and now only the second floor of the new house for the Buddha, the main offerings are wine, the Lord for the Sangya Temple Protector God, is Samye Temple. Not like a temple here, but more like an ordinary house. To Danjie Lin Temple in addition to dedicated Hatha, butter, but also can bring barley wine or white wine. Because it is the temple of Samye Temple reason, Dan Junglin Temple incense has been very strong, many because of the distance can not go to Samye Monastery, will choose to worship here. Temple dedicated Samantabhadra double reincarnation is very strange shape, the whole body mostly by the blue and white colors, quite modern, which is almost double the statue of each foreign visitors must see. 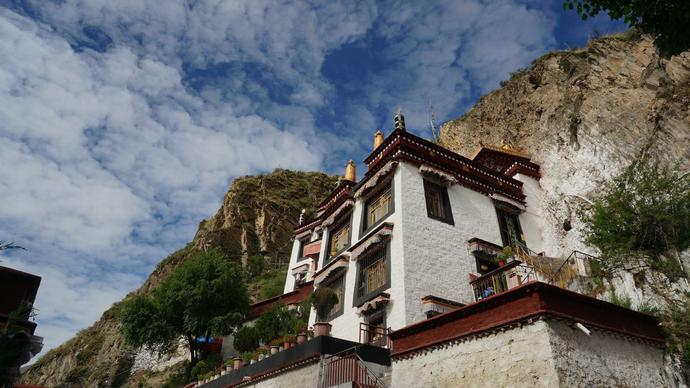 One of the earliest monasteries in Lhasa, the building relied on the mountains and Zhai Zhai clinging to cliffs, cleverly setting up a few temples throughout the temple on steep rocks. Rupu Rock Temple is built by the law of Songtsan Gampo, the legend of the Lord worship of the Lord Buddha and his disciples Buddha statue as a natural, carved into relief by the Nepalese craftsman relief. The prince was praised a total of that day was born in Zara Zhaxi immeasurable palace - Nepalese Princess Hung Zun build nine-story palace. King Songtsan Ganpao father and son had lived here, dating back about 1300 years ago. Puluyan Temple, located in the Potala Palace where the red mountain opposite the mountain Wang Yaoshan, only a hundred meters from the Potala Palace, but due to the brilliant Potala Palace was neglected. Mount Shangri-La Buddhist statues and Songtsan Gambha legal phase. 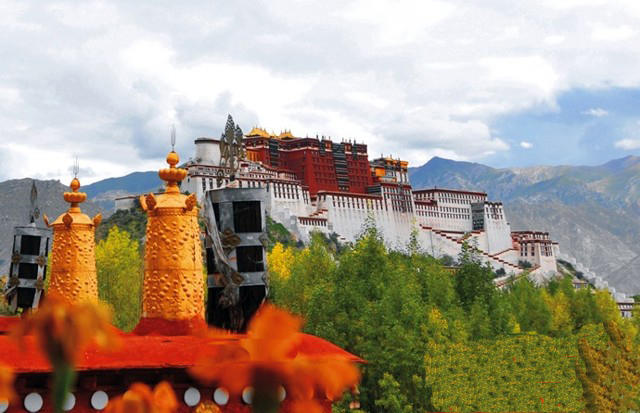 A good step by step Lotus Lhasa, there are more temples we have time to paint, and too late to tell the story.
In the air filled with religious atmosphere of Tibet, the temple can be seen everywhere. In addition to the Tibetan Buddhist temples mentioned above, there are many temples that are very popular among the Tibetan people. Some live in downtown, some in the valleys, others hang on cliffs, and they have the world's dare to imagine beauty of.
Friends have more to know about the temple, please click below, leave a message 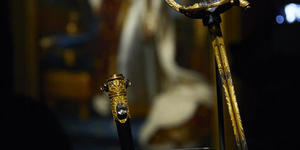 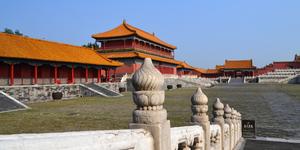 Beijing visit the Forbidden City the most complete skills
READ NEXT 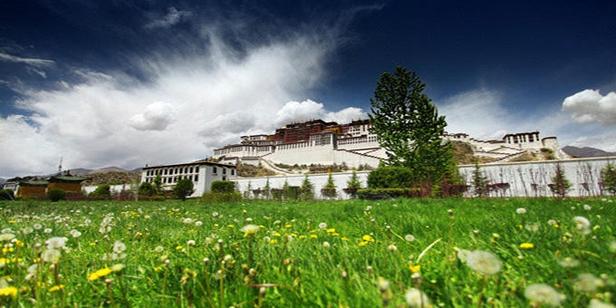