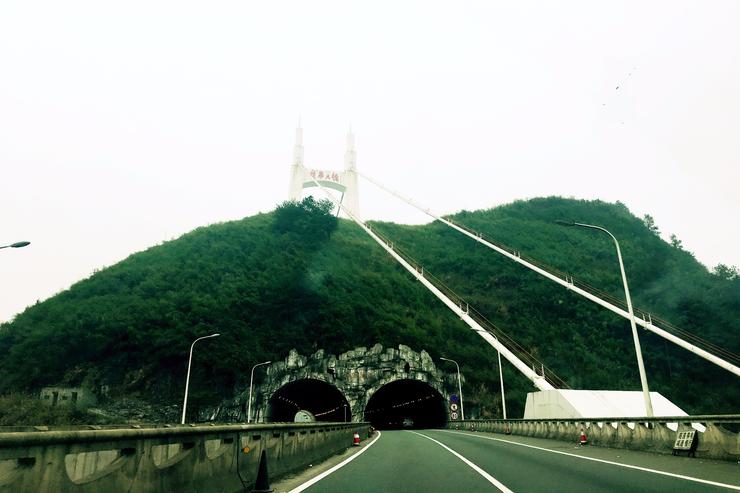 There are many day trips to Miaozhai Mission, all sites have to sell, because we booked a late, no mission, decided to drive past (more than 80 km from the ancient city). 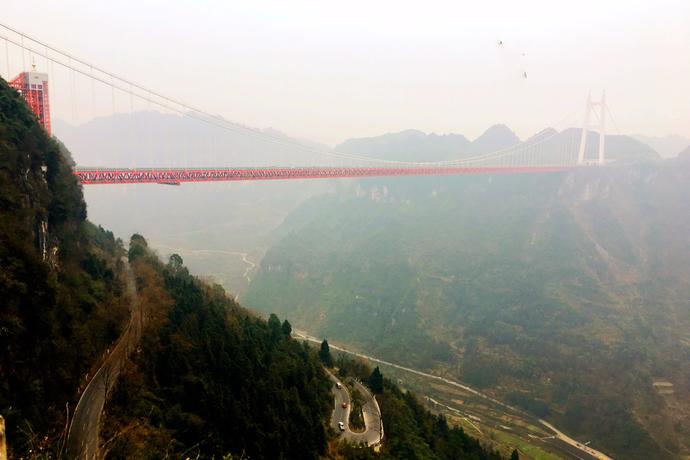 I do not know how many turns abducted, suddenly saw the side of the bridge, there is a viewing point on the road, you can see the Aizhai Bridge picture. Red bridge, hanging above the gorge, is very spectacular and dangerous.

Aizhai Super Suspension Bridge is located in the territory of Aizhai Town, Jishou City, Xiangxi Prefecture, Hunan Province. It is one of the eight key highways planned by the State - the key project in the Hunan Duanjian (Shou) Tea (峒) Expressway from Changsha to Chongqing. The main span of the suspension bridge is 1176m, the difference between the bridge deck and the bottom of the canyon is 355m, and the position of the pylon on both sides of the bridge is only 70 to 100m away from the edge of the cliff.
It has created four firsts in the world and greatly improved the traffic conditions in the two provinces and cities in Hunan and Chongqing. It is of great significance to the interconnection between two provinces and even the central and western regions. 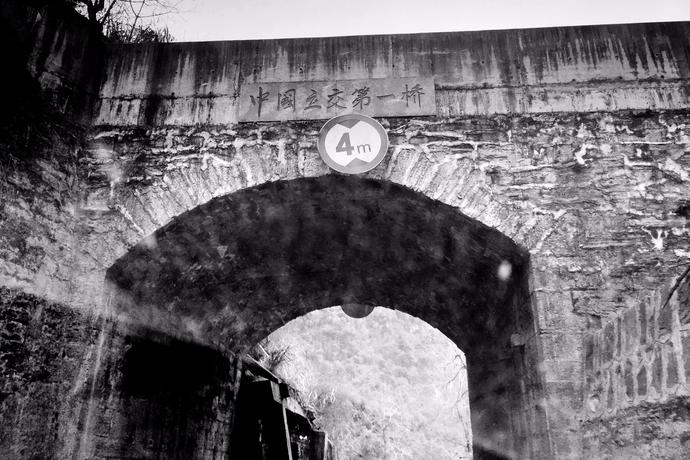 In the State Road 2298 km boundary monument 209, impressively a stone arch bridge. The whole bridge looks full of vicissitudes, the bridge hole is only for a truck to pass. The bridge is made of stone piled up for the construction of Xiangchuan Road at the time of construction technology, is the history of China's first highway overpass, the designer became the new China's first Minister of Construction. From this on, it is the most classic Aizhai highway is the most classic section of the road. 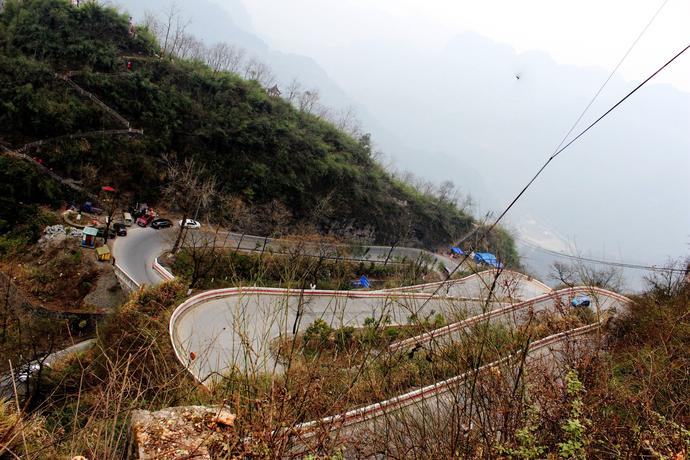 Not far from the Aizhai Bridge, is the wonders of the highway - Aizhai Panshan Road, which is the wonders of National Highway No. 319 (formerly known as Xiangchuan Highway). Bottom up by the first 13 corners reached the top. Steep steep mountains, near the top of a hill flyover, rare in the country. This section of the road about 6 km long, but built at a horizontal distance of less than 100 meters, a vertical height of 440 meters, a gradient of 70-90 degrees on the slope.
Such a specific space forced the road many turns, forming 13 sharp acute cornering, 26 cut almost parallel, up and down the road surface. The widest point of the road does not exceed 7 meters, the narrowest section of less than 4 meters, two cars in the narrowest section can not pass at the same time.

Guangxu "hall of state hall" in mind: Aizai in Western Hunan "circling Shengdi, road around the sheep intestine, one will be off, one thousand off the hook for the dry (Jishou), Wing (Wing Shun) between the two offices to and from." Before the Ming Dynasty, far away from danger, no road access. To Ming Feng Miao, local Miao side in the cliff out of a common way to the ladder.
From the road to the valley below to see, everywhere beauty, strange rocks, but the weather is not particularly good, can not see the misty landscape. Turn n 180 degrees big bend down to the bottom of the slope, is Aizhai village, enjoy the beauty, passing two villages, they went to the Deben scenic. 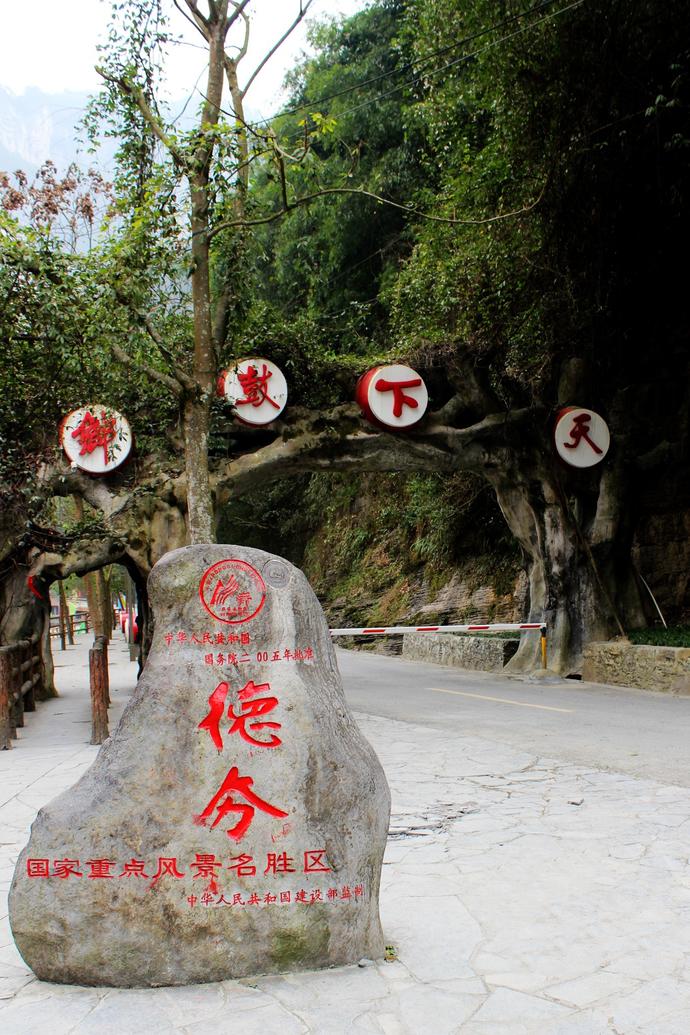 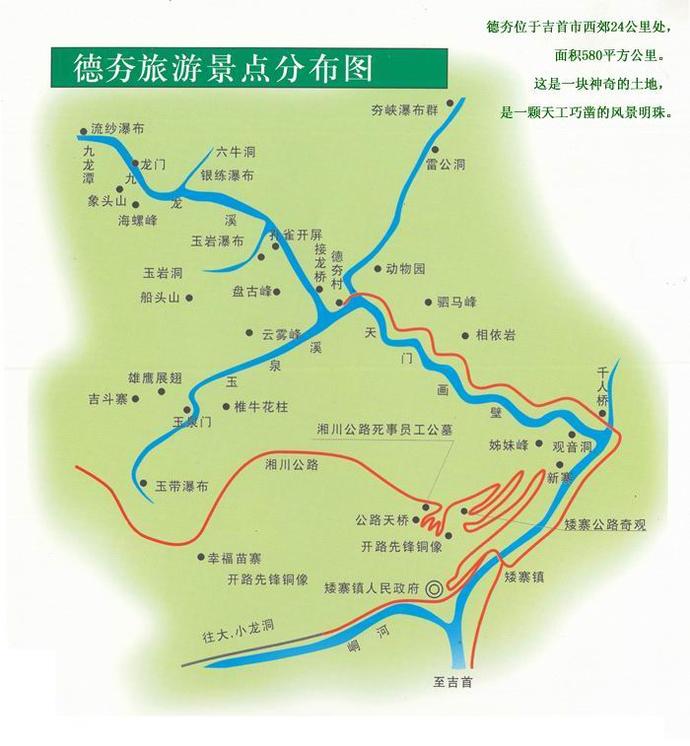 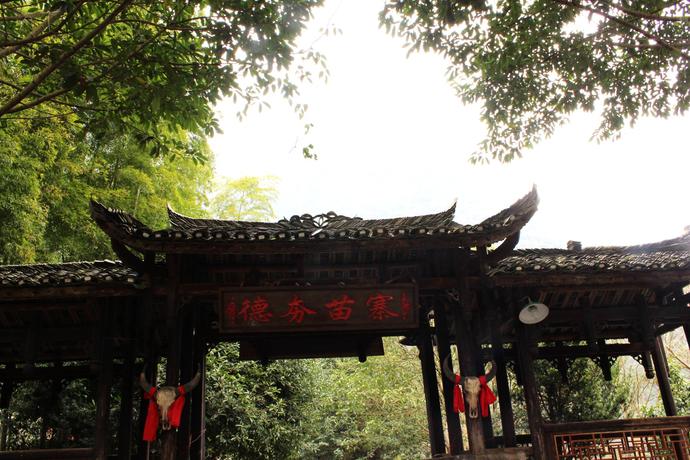 Deben, Miao as "a beautiful valley." Due to the ups and downs of the mountains, cliffs towering, peaks overlap, forming a number of cliffs, Shek Pik, peaks, waterfalls, virgin forest. River intertwined in the area, such as the four seasons spring, a pleasant climate, rich in animal and plant resources. Natural scenery is very beautiful and charming. 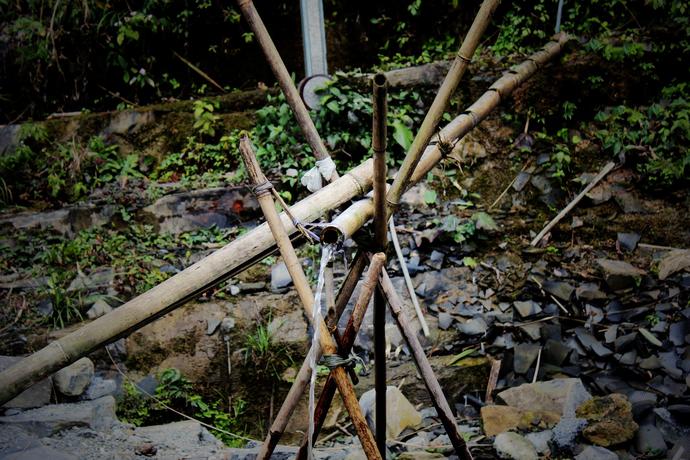 Water is plentiful here, there is constant flow of water in the mountains, and drainage tools made of pillars. 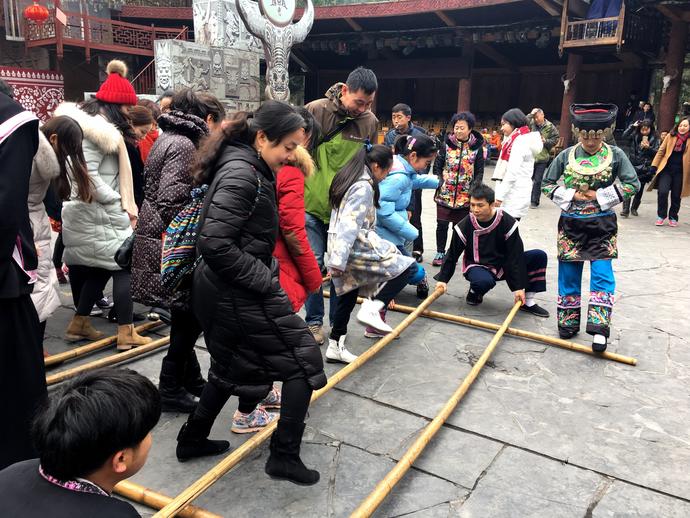 Xiangming Deben Miao particularly good drum, "drum world" reputation. Historically, Miao people used to be the means of sending information when tribal expeditions were carried out. The purpose was to summon the crowd and encourage morale. With the progress of society, the unique Miao and Drum art became a ceremony and a festive celebration. Objects and tribal flags.
Deben is one of the five major Hmong settlements. Every year, drum culture festivals are organized here. Drum teams from all over China arrive at Dehang for the competition, and the best of them are honored as drums. Today, Deming Miao drums occupy half of the four generations of Chinese Miao Drum King, has formed the traditional 36 sets of routines Miao Drum play. 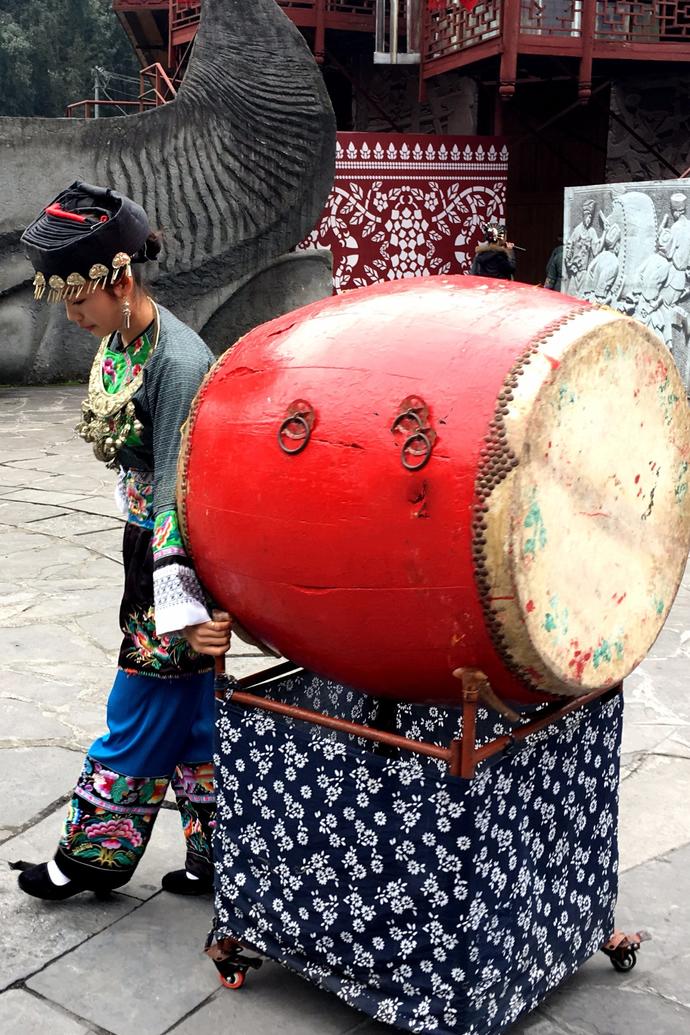 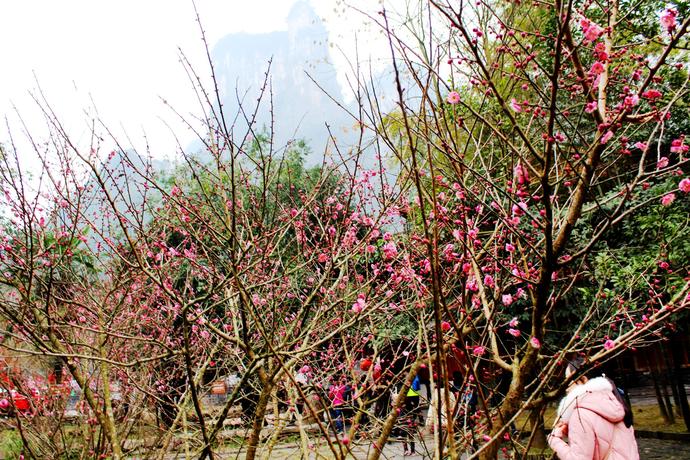 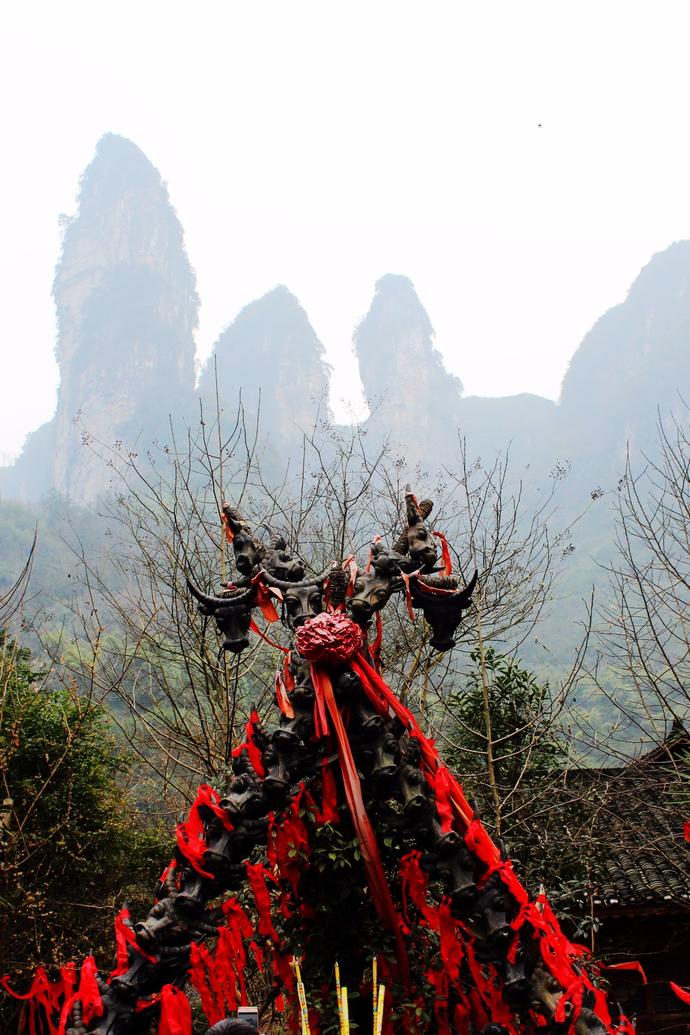 There are several lines in the scenic area, coming and going all take a long time, we can only choose one, because of the longing for the viewing platform, decided to go this farthest route. 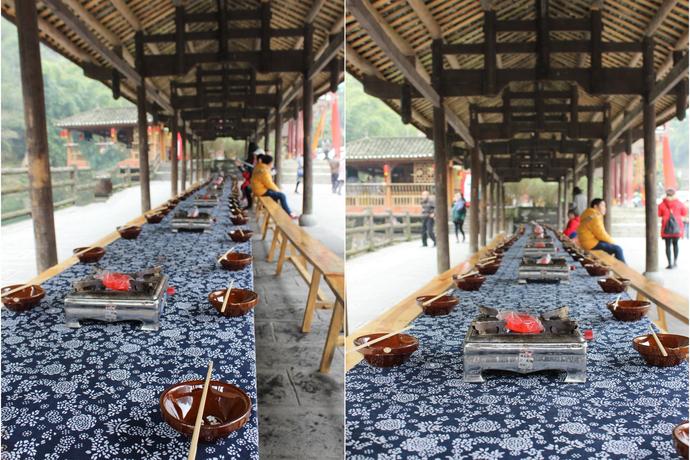 Miao from the House after the first to go, is the gorge scenery, near Miao can also be found in the vegetable garden. 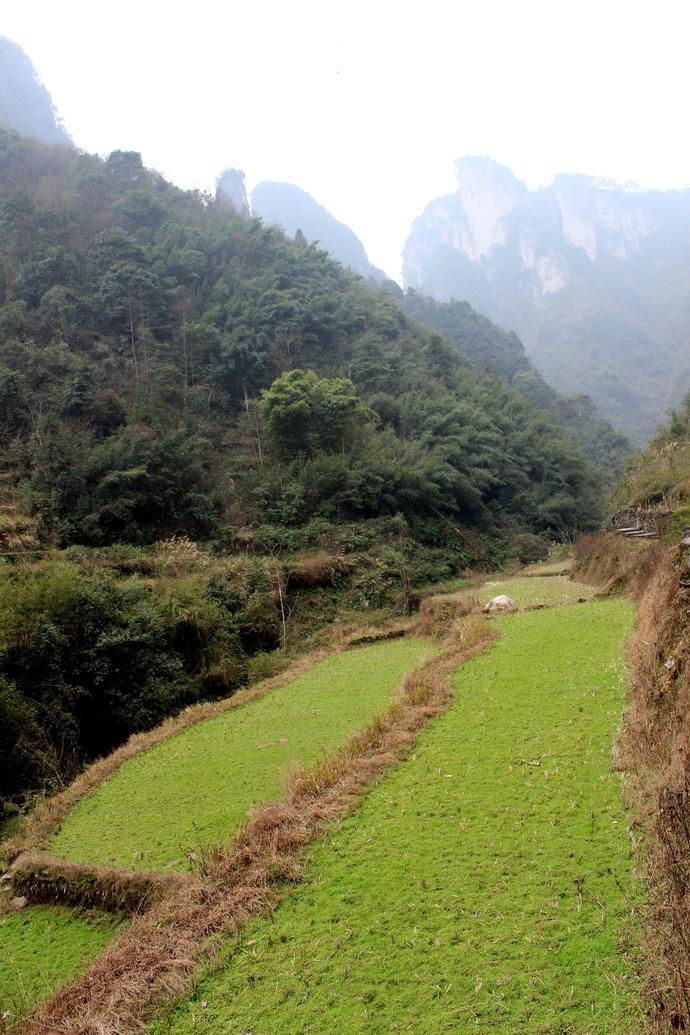 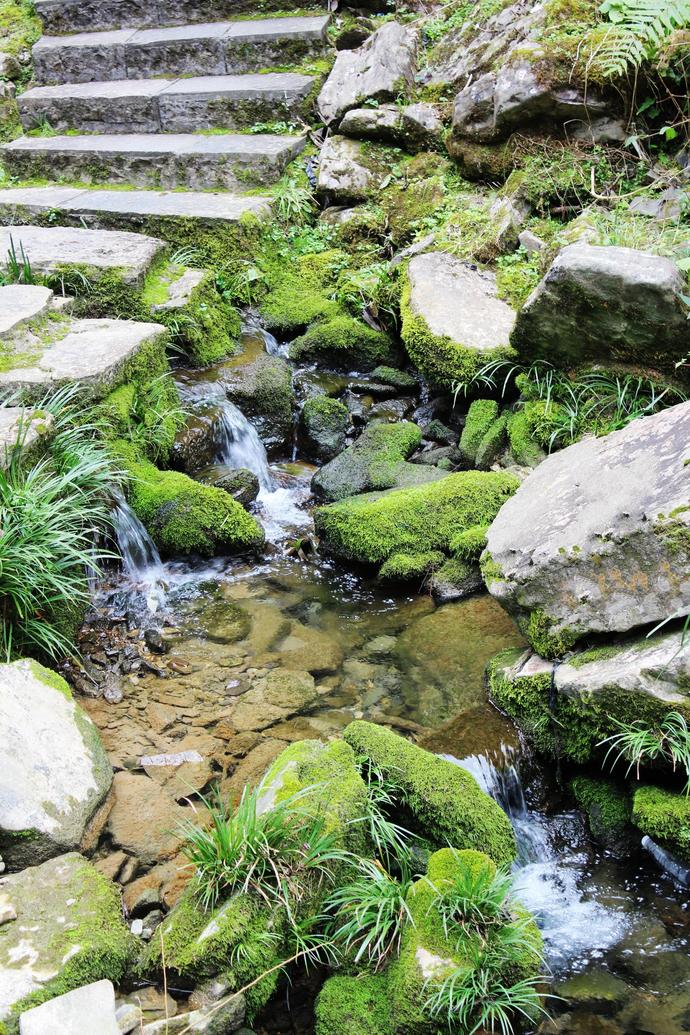 Deep into the depths of the canyon, has been accompanied by the gurgling streams, the more up, the greater the aquatic life, crystal clear, covered with moss around the stones. 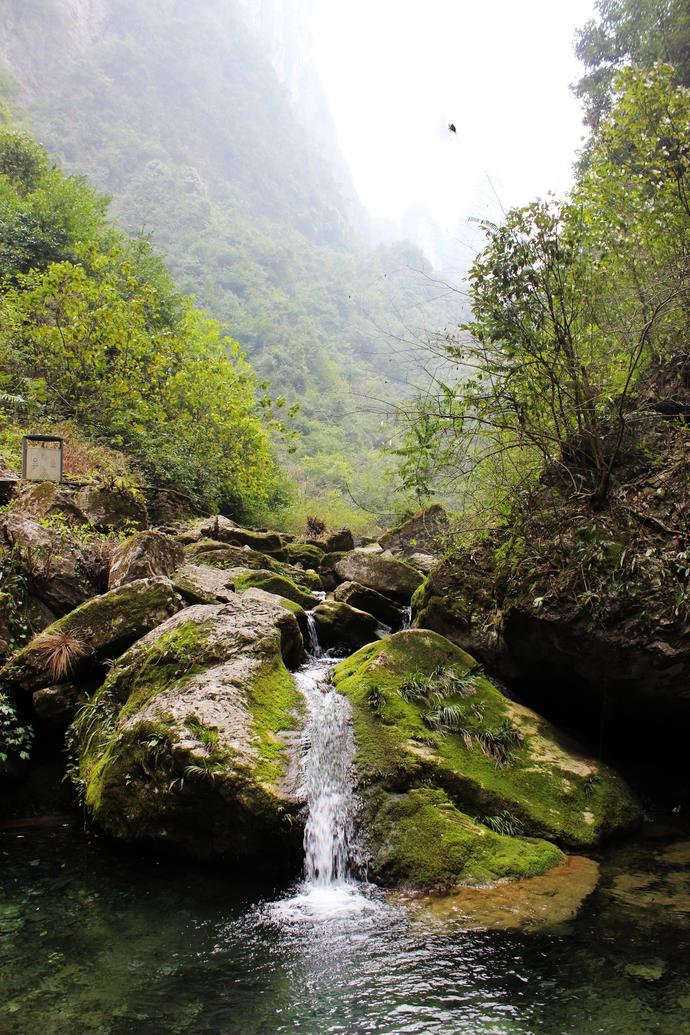 Surrounded by steep hills, the feeling has been crawling between two mountains. The steps from gentle to steep, climbed the mountain, the stairs have been narrow one person only, can not look down. 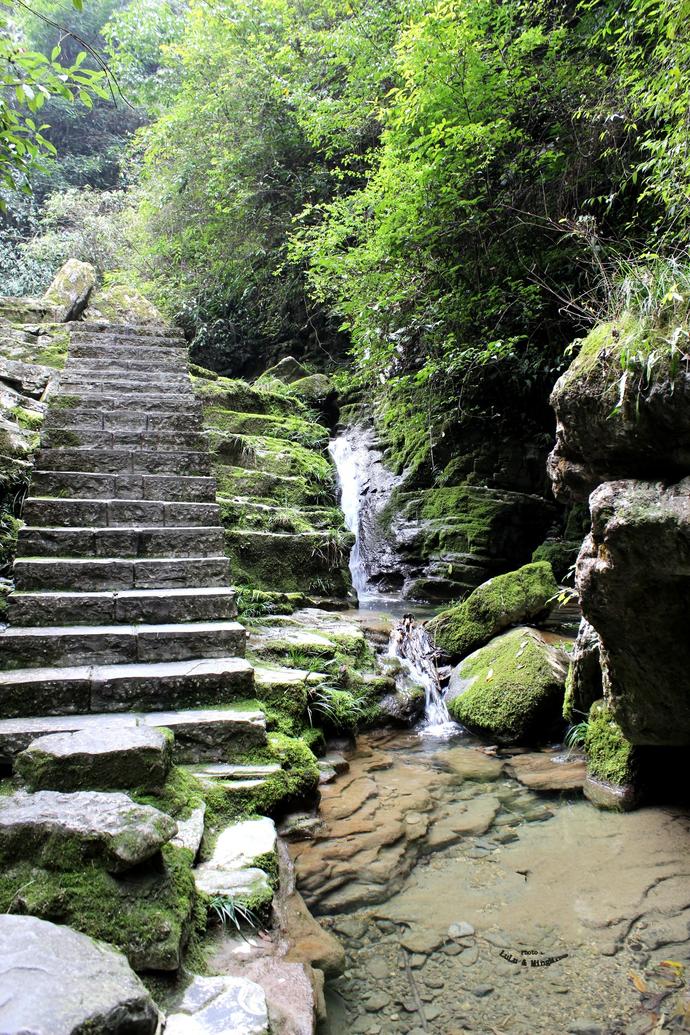 There is a natural formation of small waterfalls in the mountains ~ 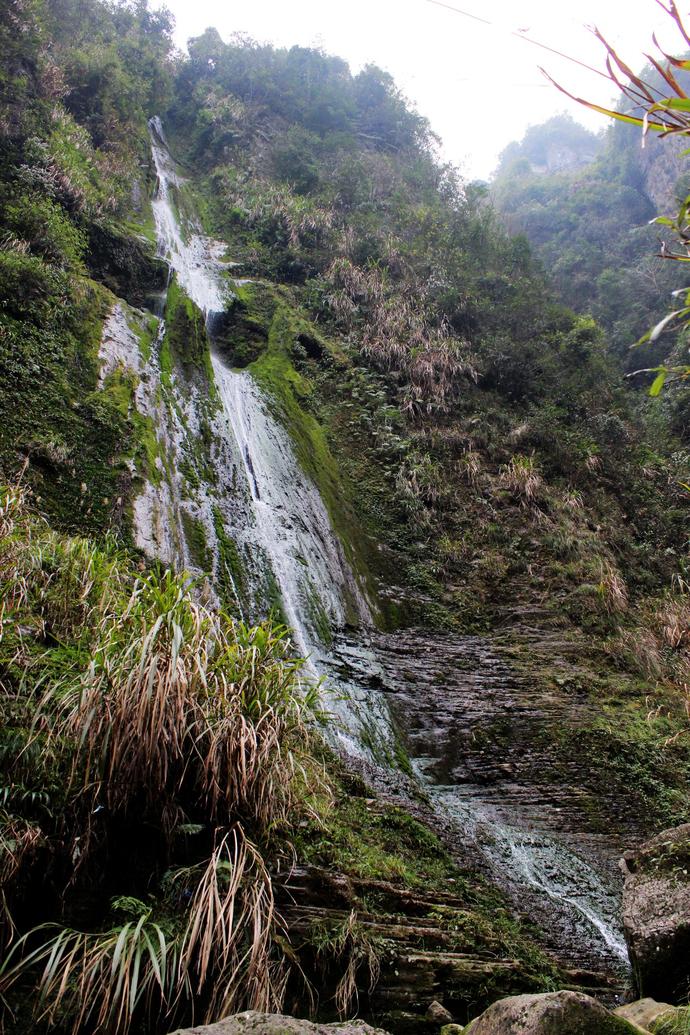 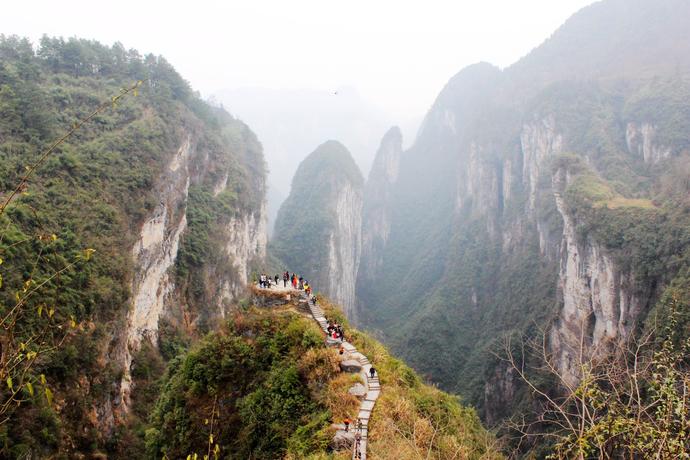